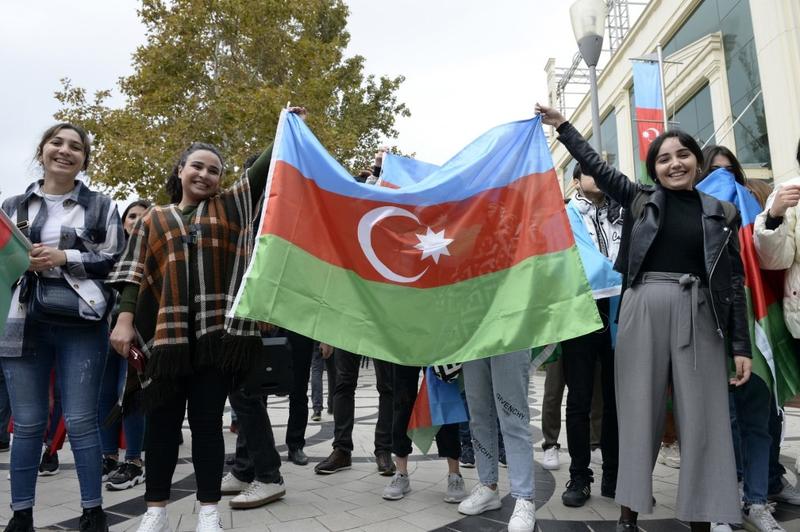 Azerbaijanis hold up their national flag as they celebrate in the streets of the capital Baku on November 10, 2020, after Armenia and Azerbaijan agreed a ceasefire following a string of Azeri victories in fighting over the disputed Nagorno-Karabakh region. (TOFIK BABAYEV / AFP)

A "complete ceasefire" and termination of "all hostilities in the Nagorno-Karabakh conflict zone are announced from 00:00 hours Moscow time on November 10, 2020," the joint statement read.

A key element of the joint statement was the deployment of a Russian peacekeeping contingent along the line of contact in Nagorno-Karabakh and the Lachin corridor.

"A peacekeeping contingent of the Russian Federation is deployed consisting of 1,960 servicemen with small arms, 90 armored personnel carriers, 380 vehicles and piece of special equipment," the statement added.

The peacekeeping contingent would be deployed in parallel with the withdrawal of Armenian armed forces for five years with the possibility of an automatic extension.

Internally displaced persons and refugees will be able to return to the Nagorno-Karabakh region and its surrounding areas under the protection of the Office of the United Nations High Commissioner for Refugees.

Azerbaijan and Armenia will also exchange war prisoners, other detained persons and bodies of the dead, while all economic and transport links of the region will be unblocked.

Armenia and Azerbaijan have been at loggerheads over the mountainous region of Nagorno-Karabakh since 1988. Peace talks have been held since 1994 when a ceasefire was reached, but there have been sporadic minor clashes.

A new round of armed conflict broke out in the region in September, causing heavy casualties and property losses.