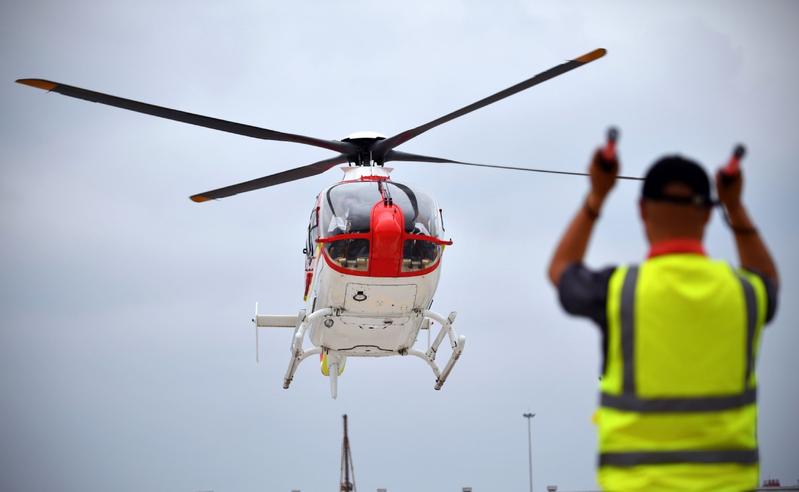 An Airbus H135 helicopter takes off in Haikou, Hainan province, to provide transport services between the city and Zhanjiang, Guangdong province. (PHOTO / XINHUA)

Airbus Helicopters, the largest global helicopter manufacturer, said it has seen robust recovery of the helicopter market in China, and remains confident about future prospects in China, despite an uncertain global environment due to the COVID-19 pandemic.

The first batch of four H135 helicopters fully assembled in China rolled out in September from the company's final assembly line in Qingdao, Shandong province, the first such facility built by a foreign helicopter manufacturer in China. The plant, which started operations last year, resumed production in April, when the contagion came under better control in China.

By the end of this year, seven H135 helicopters are expected to be delivered to Chinese customers from Qingdao. The plant is increasing its production capacity to meet growing demand, and plans to deliver 11 helicopters next year.

"We are committed to developing long-term partnership with China. Our commitment and strategy in China remain unchanged, despite the pandemic," said Marie-Agnes Veve, general manager of Airbus Helicopters China.

Airbus Helicopters, a subdivision of European aircraft manufacturer Airbus, said the number of flying hours operated by its customers in China dropped in January and February, hampered by the sudden outbreak of COVID-19.

By the end of this year, seven H135 helicopters are expected to be delivered to Chinese customers from Qingdao. The plant is increasing its production capacity to meet growing demand, and plans to deliver 11 helicopters next year

Since March, the number of flying hours of its Chinese customers started to pick up, and in the second quarter, the number exceeded the level seen in the same period of last year, reflecting the strength of China's helicopter market, Airbus Helicopters said.

This year, the total annual flying hours of those who operate Airbus helicopters in China are expected to be 5 percent to 10 percent less than last year. Globally, the number is expected to fall by 15 percent year-on-year, and the main drop came from tourism and private transport segments.

On the other hand, government entities have shown higher demand for helicopters in emergency medical rescues and the transportation of medical products to fight the pandemic, the manufacturer said.

Airbus Helicopters takes a dominant 35 percent of the civil turbine market share in China, with more than 320 helicopters in service by the end of October, it said. Other major players in the sector include Bell Helicopter Textron Inc, Leonardo SpA, Russian Helicopters JSC and Sikorsky Aircraft Corp.

READ MORE: Airbus to start A350 deliveries from Tianjin

Investment from foreign operators has continued to pour into one of the last underdeveloped industries in China as demand is booming.

Bell Helicopter Textron Inc, a Texas-based US helicopter manufacturer, said it plans to have a full service capability and further increase investment in China. It has seen high demand for helicopters in segments such as emergency response, firefighting, public safety, law enforcement, and transportation in the country.

Currently, Bell has a fleet size of more than 200 helicopters operating in China, and it saw no cancellation of new orders in China and North Asia due to the pandemic.