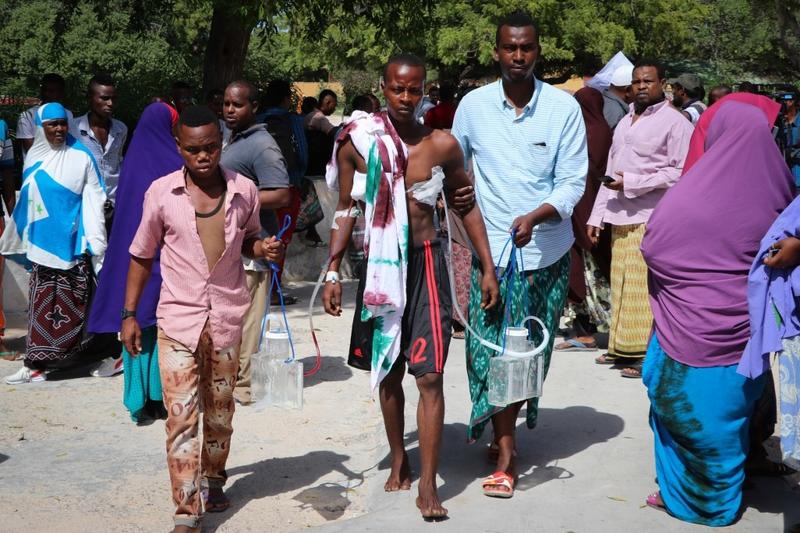 In this file photo, a wounded man is helped as he arrives at Madina hospital after being injured by a bomb blast in Mogadishu, Somalia, on May 31, 2020. (ABDIRAZAK HUSSEIN FARAH / AFP)

MOGADISHU - Six people died on Tuesday in Somalia’s capital Mogadishu when a suicide bomber blew himself up in a restaurant near a police academy, a police spokesman and a witness said.

It was unclear who was behind the attack.

“A blast occurred at a restaurant near School Policio (police academy),” police spokesman Sadik Ali told reporters in a WhatsApp message group shortly after the blast went off.

Later he told Reuters six people, including the perpetrator, had died in the bombing.

He said he could see huge clouds of smoke rising above the restaurant and ambulances trying to reach the site, in the city’s Hamar Jajab district near Mogadishu port.

Another witness, Mohamud Ahmed, told Reuters heavy rain had sent a lot of people into the restaurant to seek shelter.

“As I was sipping tea and looking down, (a) blast occurred. From there I don’t know what happened,” he said. His legs, hands and head had been hit by shrapnel from the explosion, which he said had also given him concussion.

Al Qaeda-allied Islamist group al Shabaab frequently carries out bombings in Mogadishu and elsewhere in Somalia as part of its campaign to topple the central government.

The group wants to establish its own rule in the Horn of African country based on its own strict interpretation of Islam’s sharia law.