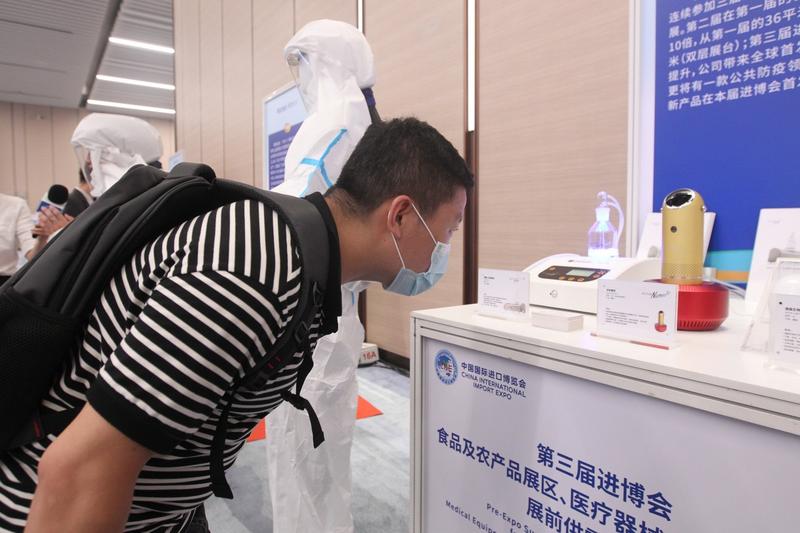 In this undated file photo, a visitor looks at medical devices on display during a warm-up exhibition of the third CIIE in Shanghai. (PHOTO / XINHUA)

The previous two editions of the China International Import Expo have played a significant role in innovative drug development, especially as most of the products showcased by the global pharmaceutical firms at the expo are now available in the country.

British drugmaker AstraZeneca introduced an inhalation medicine for respiratory diseases during the inaugural CIIE in 2018, which has benefited 10 million Chinese patients in more than 7,300 hospitals spanning 30 provincial-level regions

These innovative therapies have not only helped meet the urgent clinical needs locally but also contributed significantly to the Healthy China 2030 Initiative, said experts.

It has also given companies greater confidence in introducing cutting-edge, first-in-class, and best-in-class medical innovations in China to help overcome the health challenges, they said.

French pharmaceutical company Sanofi said most of the innovative drugs for clinical needs, which were showcased during the past two CIIEs, have been launched in an accelerated manner in sectors like neuroscience, immunology and inflammation and rare diseases.

"There was no therapy previously for many of these disease areas, or existing treatment options failed to meet clinical needs," said Burkon Wang, general manager of Sanofi China's specialty care department.

Among them, Dupixent, the world's first targeted biological agent to treat moderate to severe atopic dermatitis in adults, was approved two years ahead of the original schedule thanks to China's reform in administration of medical products. With the support by regulatory agencies at all levels, it took only 25 days to be launched, making history for any biologic in the country.

British drugmaker AstraZeneca introduced an inhalation medicine for respiratory diseases during the inaugural CIIE in 2018, which has benefited 10 million Chinese patients in more than 7,300 hospitals spanning 30 provincial-level regions.

An exhibit during last year's CIIE, which the company said was China's first medicine for treating anemia in patients with chronic kidney diseases, has already covered nearly 3,000 hospitals spanning almost all the provincial-level regions in the country and benefited about 100,000 patients.

Simulated mobile oncology screening vehicles tailor-made for the rural areas which were demonstrated last year have also been put into operation. The lung cancer screening vehicles have been used in five provinces－Jiangsu, Zhejiang, Henan, Jiangxi and Guangdong－and have already conducted more than 23,000 screenings. Vehicles for breast cancer screening have recently started functioning in Henan and Shaanxi provinces.

Through the National Medical Products Administration's expedited review channel, an ointment from Pfizer, a United States-based biopharmaceutical company, and an exhibit at last year's CIIE, has become an innovative prescription drug to treat mild to moderate atopic dermatitis in adults and children.

"Approval for the drug was significant as no new product in the topical non-hormonal and nonsteroidal anti-inflammatory field was available in the country for a decade. It filled the unmet medical needs for children with AD and provided an opportunity to relieve symptoms in patients, especially children aged two and above," said Wu Kun, chief operating officer of Pfizer Biopharma Group in China.

After signing a cooperation agreement with the Hainan provincial government during last year's CIIE, Pfizer has made considerable progress with the province's Boao Lecheng International Medical Tourism Pilot Zone. In July, the first prescription of an orally-taken targeted drug to treat a type of lung cancer was obtained by a patient in China.

"Such an innovative therapy has brought hopes of prolonged survival for Chinese patients with advanced-stage lung cancer," Wu said.

Typically, the time taken to launch a new drug in China used to be at least five years more than in Europe and the US. However, it is no longer the case thanks to policy reforms which seek to introduce more innovative medical products at an accelerated speed, industry experts said.

Hong Chow, CEO of Roche Pharmaceuticals in China, said that the company has launched five major innovative drugs in the country over the past two years, mostly simultaneous with their launch in Europe and the US.