By Yuan Quan and Yin Pingping 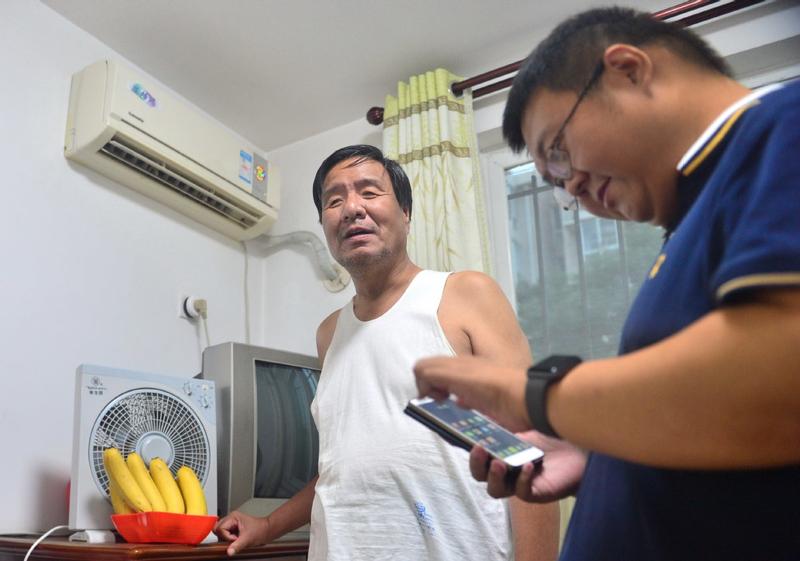 In this undated photo, Wang Hui (right), a blind apprentice lawyer, helps a blind senior set up smart appliances at the senior's home in Tianjin. (PHOTO PROVIDED TO CHINA DAILY)

TIANJIN－Wang Hui wears glasses, reads text on a computer screen and sends messages on his mobile phone. Few can tell at first that the 35-year-old apprentice lawyer is blind.

Against a stereotype in China that blind people can work only as massage therapists or instrument tuners, Wang passed a bar examination last year and has been employed by a law firm in the northern Chinese port city of Tianjin. He has devoted his spare time to developing screen-reading software to help the visually impaired easily find information with modern technology.

Since last year, Wang has been a mobile phone guide for seniors.

We blind people must be engaged in all walks of life so that others will see that we are capable of doing more normal jobs.

"The elderly have similar troubles using regular mobile phones due to mobility, eyesight or cognitive difficulties," Wang said. "I understand their frustration."

In a country where opportunities for blind people are limited, Wang wants to prove they can contribute, too.

Wang has been blind in his right eye since birth, and he wore thick glasses throughout his childhood. Though he was tall, he sat in the front row at school.

He studied hard and got good grades but never talked about his vision with schoolmates. Some thought he was arrogant, as Wang never greeted them in public.

Even so, he did not want to explain.

"Perhaps it was because of self-esteem," Wang said.

He lost sight in his left eye while he was in university. His then girlfriend cried but still married him after graduation over her parents' objections. They now have a 3-year-old boy with good eyesight.

"At that time, my world was dark, but very warm," Wang recalled.

However, he struggled for years to find a decent job. He wanted to be a teacher at a school for children who are blind or visually impaired. Unfortunately, most Chinese blind schools do not employ blind people.

He tried to apply for positions in public institutions for the disabled but was turned down due to his poor eyesight.

"If my professional competence is the issue, I can accept it. But if it is because I can't see and I'm not given a chance to try, I can't accept it," Wang said.

Last year, Wang became the first blind person in his city to pass the computerized National Judicial Examination, one of the most demanding national tests in China

Wang felt misunderstood. In the workplace, many think blind people are less educated and less competent than other employees, he said.

"I will change the way they see us," Wang said determinedly.

Wang said technology can remove barriers for the disabled.

In 2008, he set up a workshop in a Tianjin community with a volunteer group of university students to help the disabled engage with technology.

Over the past 12 years, he has offered free training to more than 10,000 blind people on the screen reader, a software application for mobile phones and computers that converts text into synthesized speech. Wearing headphones, blind users can hear information shown on the screen.

He also helps blind users contact tech companies to improve functions so that they make their products more accessible.

However, not all companies are aware of their customers with disabilities. Some service providers are puzzled.

"Are you blind?" they ask. "How can you use our products? Can you use a mobile phone?"

Wang does not take offense. He is used to the ignorance, but to solve some problems, he had to resort to law.

Last year, Wang became the first blind person in his city to pass the computerized National Judicial Examination, one of the most demanding national tests in China. Local media took up his story, and he soon found employment.

Wang was encouraged. "We blind people must be engaged in all walks of life so that others will see that we are capable of doing more normal jobs."

Since 2019, more seniors have been taking his workshops on skills their grandchildren have already mastered.

"Nobody told me that I could get these things," said Song Shuxin, 72, who has learned to use his mobile phone to chat, hail taxis and pay for things.

Song does not mind that Wang, who has been training him mobile phone use, is blind.

"His heart lights up my life."