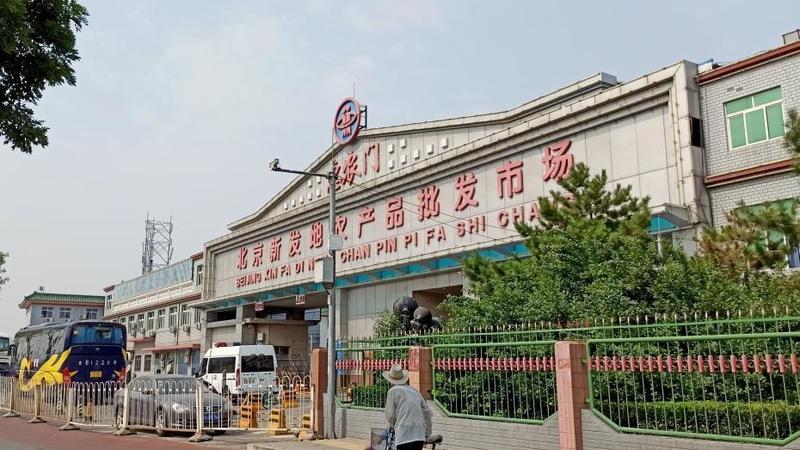 This photo shows Xinfadi, the largest wholesale market with fruit, vegetable and meat supplies in Beijing, which was closed on June 13, 2020 after new cases of COVID-19 emerged. (PHOTO / CHINANEWS.COM VIA CHINADAILY.COM.CN)

Chinese scientists have discovered that the COVID-19 outbreak in Beijing in June was likely to have been triggered by cold-chain imports from overseas, adding to mounting evidence that the virus can be transmitted from contaminated cold-chain products to humans.

Based on the findings, the study underscores the significance of intensifying supervision of cold-chain imports, especially for countries that have managed to curb the domestic spread of the virus and continue to receive shipments from regions where the virus is still raging.

"We speculate that the COVID-19 resurgence in Beijing was likely to have been initiated by an environment-to-human transmission originating from contaminated imported food via cold-chain logistics," Chinese scientists said in a study published in the National Science Review

A new cluster of local infections linked to the massive Xinfadi wholesale market in Beijing's Fengtai district emerged on June 11 after the capital reported no new local cases for 56 consecutive days.

The outbreak, which prompted a mass testing campaign covering about half of the over 20 million residents of the capital, saw 335 confirmed cases, with the last patient being diagnosed on July 5, according to local health officials.

In the new study, researchers found that nearly half of those who tested positive for the virus had worked at the Xinfadi market and 28 percent visited the market about two weeks before the first case was confirmed. The remaining patients were close contacts of those employees and visitors.

The study then narrowed down the source of infections to a stall in the market's basement, which mainly sells seafood products.

Genome sequencing also confirmed that the virus strain responsible for the outbreak was not derived from strains previously circulating in China. Instead, observed mutations suggest that the virus strain was more similar to those identified in Europe and was thus likely to have been imported from a foreign country.

Since salmon was the only imported food sold at that stall, the researchers then examined all sealed salmon in cold storage at the market. Test results show that five salmon swab samples from a company that supplies imported salmon to the market tested positive, and genome sequencing of one of the five was very similar to the virus found in infected patients and the environment at the market.

"We speculate that the COVID-19 resurgence in Beijing was likely to have been initiated by an environment-to-human transmission originating from contaminated imported food via cold-chain logistics," reads the study.

Tsinghua University's Advanced Innovation Center for Structural Biology, a participant in the study, said in an article released on its website on Tuesday that the Chinese Center for Disease Control and Prevention also reported that it isolated live novel coronavirus from cold-chain food products in Qingdao, Shandong province.

The China CDC's discovery corroborated the study's finding that cold-chain food is likely to be a significant route of transmission for the novel coronavirus, the article said.

Aware of the potential risk, China has already ramped up checks on imports. The virus has so far been detected in packages or shipping containers of imported food in at least nine provincial regions across the country.