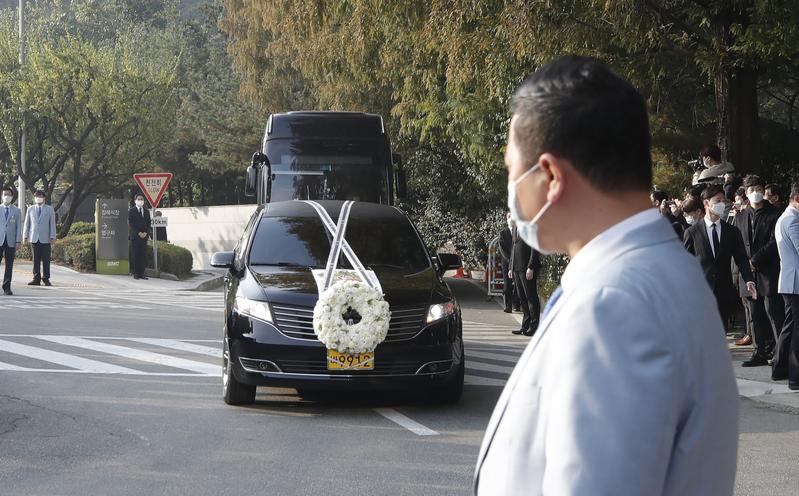 SEOUL - The family of late Samsung Electronics chairman Lee Kun-hee held a funeral ceremony on Wednesday for the patriarch, whose death on Sunday threw into question the control of the chipmaker and the country's largest conglomerate.

Lee Kun-hee’s death raised expectations for stake sales and a potential restructuring of Samsung Electronics, as the family grapples with an anticipated inheritance tax bill of nearly 10 trillion won (US$9 billion)

The focus is now on Lee’s son Jay Y. Lee, the 52-year-old vice-chairman, to see what kind of leadership he will display as he faces serious legal risks from two trials seen stemming from efforts to ensure he succeeded his father.

After a morning ceremony closed to the media, family members, including Jay Y. Lee, boarded a bus, which left the Samsung Medical Center, where the funeral services had been held, Yonhap News TV channel showed.

The late Lee’s casket, with a white wreath atop, was transported in a black hearse from the hospital to a family burial ground in Suwon, Yonhap news agency reported.

The route taken passed by sites that held meaning for Lee, including his home in central Seoul and Samsung Electronics’ chip-production facilities in Hwaseong near the capital.

Lee’s death raised expectations for stake sales and a potential restructuring of the sprawling business empire, as the family grapples with an anticipated inheritance tax bill of nearly 10 trillion won (US$9 billion).

The tasks awaiting Samsung Electronics’ new head will include growing the non-memory chip business and expanding its presence in software.

But heir apparent Jay Y. Lee faces a bigger risk from two ongoing trials, which analysts say could land him in jail for a second time.

One trial concerns the 2015 merger of two Samsung affiliates that helped Lee assume greater control of Samsung Electronics, and another relates to his role in a bribery scandal, for which he had been jailed for a year.

“Inheritance and corporate governance are issues as well, but the trials, especially the latter case, are the biggest problem. His father’s passing may turn public opinion in his favor, but the effect it might have is unclear,” said Park Ju-gun, head of research firm CEO Score.