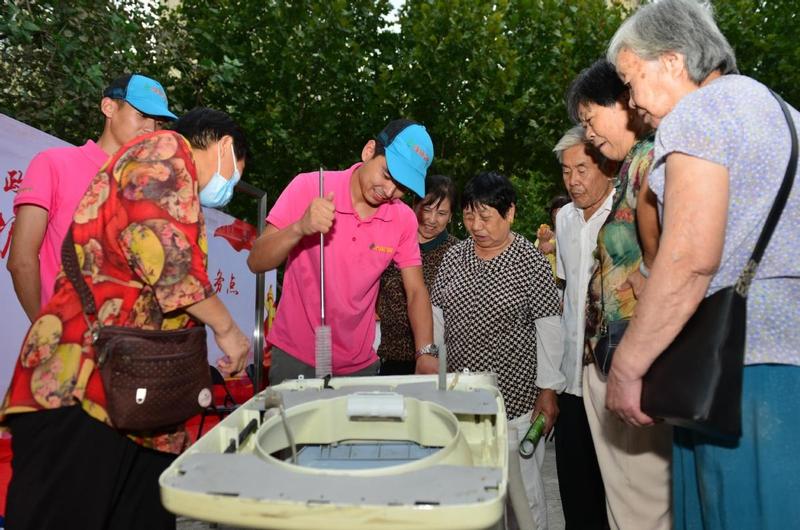 Demand for housekeeping services among Chinese families has rebounded as COVID-19 increasingly comes under control in the country after the sector experienced a major hit due to the pandemic.

From January to August, overall demand for those seeking positions in the housekeeping sector grew 11.59 percent on a yearly basis. Demand for trash classifiers surged 240.34 percent year-on-year - the highest growth in the sector during the period, said a Tongcheng report

Therefore the industry's recruiting demand has seen a significant resurgence starting from the latter half of the year, said a new report by 58 Tongcheng Recruitment Research Institute.

Strong hiring demand was seen in July and August. Demand for trash sorters surged 183.83 percent year-on-year during the eight-month period, the report said.

In recent years, the government has issued a series of policies to promote the classification of waste, and the number of cities that have begun to implement trash classification requirements is increasing.

In addition to Beijing and Shanghai, Wuhan of Hubei province and Sanya of Hainan province, among other cities, have newly introduced garbage classification requirements. The trend has driven higher demand for sorters who are tasked with trash classification guidance and management.

From the job-hunting side, from January to August, overall demand for those seeking positions in the housekeeping sector grew 11.59 percent on a yearly basis. Demand for trash classifiers surged 240.34 percent year-on-year - the highest growth in the sector during the period, said the Tongcheng report.

During the eight-month period, the average monthly salary of employees in the housekeeping sector stood at 7,489 yuan (US$1,118), while the monthly salary of nannies taking care of newborns and new moms reached 10,086 yuan, the highest in the sector. Guangdong, Shandong, Zhejiang and Jiangsu provinces as well as Beijing saw the highest demand for domestic helpers.

"Being a postpartum nanny is a job that requires certain skills and experience and is a very tough position. Thus, the monthly salary - especially for those with professional training－tops other positions in the sector," said the report.

In addition, in the first eight months, the average salary of employees who work in pet care and cosmetology came in at 9,676 yuan a month, growing 33.86 percent year-on-year. Chinese consumers have been increasingly willing to invest more money in pet care, and this has prompted rapid salary growth for those engaged in such professional services.

Since the outbreak of COVID-19, a large number of brick-and-mortar stores suspended operations for contagion prevention reasons. Some sales staff and servers at restaurants then shifted careers to the housekeeping sector, and the number of people seeking related jobs has climbed accordingly. 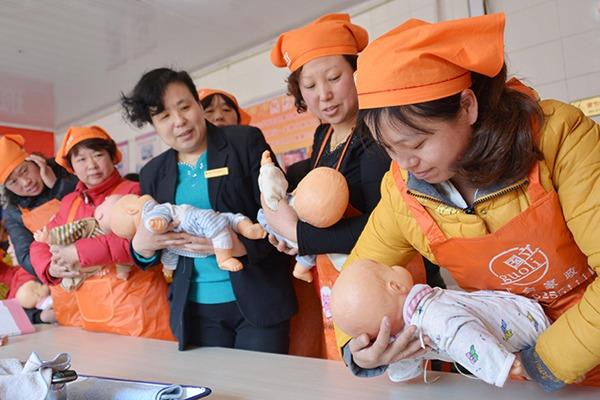 In this undated file photo, nannies learn how to take care of babies at a training center in Jimo, Shandong province. (PHOTO / XINHUA)

The regular management requirements have fueled market demand for security guards, and the position has witnessed the highest hiring demand in the housekeeping sector of late, the report said.

Chinese consumers have also become more concerned about their health conditions because of the pandemic. Some families have adopted the practice of buying purified water, or using multiple courses of filtration, while many water companies have indicated higher recruitment demand for water delivery staff, the report said.

In addition, following the government's relaxation allowing married couples to have up to second children in 2016, a growing number of newborns have been second children, and young Chinese families have shown increasingly higher demand for nannies and babysitters.

"As the contagion increasingly comes under control in China, people are showing more confidence in hiring domestic helpers and have placed an increasing number of business orders with housekeeping firms. There could be a short-term shortage of domestic helpers, which fuels higher recruiting demand," Zhao of LeadLeo said.

The O2O (online-to-offline ) business model has made it more convenient for both consumers and companies. Consumers can get comprehensive information online and quickly select the most suitable housekeeping services they like. For homemaking service providers, they can take more accurate marketing strategies and maintain customers by collecting data preferences.

Fei Yuhong, 50, has been a domestic helper for eight years, and is now a senior professional nanny working for an employer in Jinan, Shandong province, where she helps look after a 2-year-old toddler.

Since the initial outbreak of the contagion, Fei has been paying particular attention to the safety and nutrition of the baby. She plans healthy meals a day ahead of time.

During the outbreak period, Fei sterilized the baby's clothes on a daily basis. She also cleaned the home twice a day. When she takes out the trash, she always wears masks and shoe covers. When she returns, she disinfects her hands and the doorknobs in the home.

"The job requires me to be highly attentive and not slack off. I would like to do my best so that my employer is satisfied. In this case, I enjoy job security," Fei said.

"I didn't go back to my hometown in Liaoning province for the Spring Festival holiday. I have been working at different places and have been unable to go home for quite a while, and I'm concerned about my college student son and my family," she said.

Last year, there were about 740,000 housekeeping service providers nationwide. The total assets of related companies exceeded 430 billion yuan, said the Ministry of Commerce.

Over the past few years, a number of online-to-offline or O2O homemaking service providers, such as 58 Daojia, Yunjiazheng and Ayibang, have emerged as leaders in the sector. Although large-scale housekeeping companies only accounted for 25 percent of the sector's total, their sales revenue made up more than 60 percent of the total, indicating that they are more competitive in the market, LeadLeo said.

"The O2O business model has made it more convenient for both consumers and companies. Consumers can get comprehensive information online and quickly select the most suitable housekeeping services they like. For homemaking service providers, they can take more accurate marketing strategies and maintain customers by collecting data preferences," Zhao said.