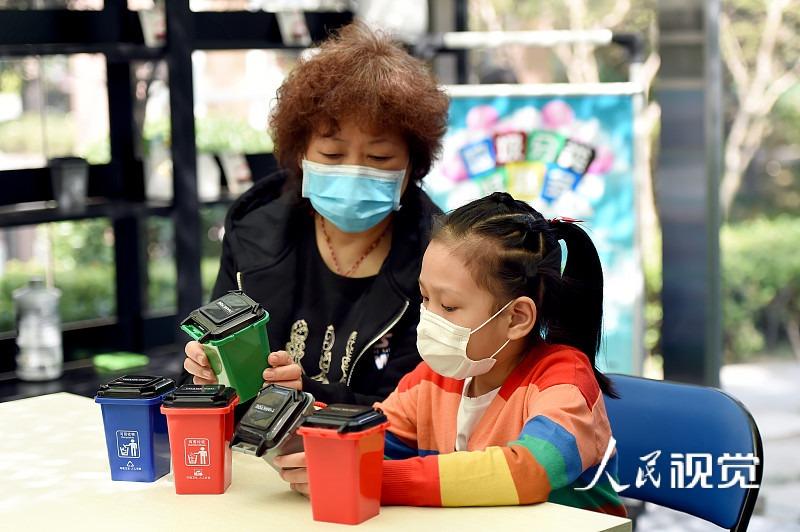 A mother teaches her daughter the colors of bins for different types of domestic trash at a promotional center in Beijing's Haidian district on April 30, 2020. The capital is launching mandatory garbage sorting on Friday. (CHINA DAILY)

Mandatory citywide garbage sorting will begin in Beijing on Friday, aided by new guidelines for residents and the start of a three-month inspection campaign to monitor enforcement.

The strict garbage sorting rules require residents to classify their domestic trash into four different categories: kitchen waste, recyclables, hazardous waste and other waste. Those who fail to sort their garbage properly could face fines of up to 200 yuan (US$28).

Green bins will be for kitchen waste, blue ones for recyclables, red for hazardous waste and gray for other waste.

For example, a guideline released on Monday advised residents to have two trash bins and one garbage bag at home to make the separation of different kinds of waste more convenient.

"We plan to control the total amount of domestic waste in all districts of Beijing at the source in this way," Li said.

By Monday, the city had more than 113,000 waste classification bins and sorting stations, as well as 980 enclosed cleaning stations and small garbage transfer stations for trash sorting, according to the capital's urban management authorities.

Under the newly revised domestic waste regulation, supermarkets, shopping malls and trade markets may no longer use super thin or free plastic bags. Restaurants and hotels must stop offering disposable items unless customers request them

The inspection, lasting until the end of July, will focus on mixed waste and its dumping and transport, he said.

Meanwhile, the city's market supervision authorities will begin a three-month crackdown on the illegal use and sale of plastic bags.

Under the newly revised domestic waste regulation, supermarkets, shopping malls and trade markets may no longer use super thin or free plastic bags. Restaurants and hotels must stop offering disposable items unless customers request them.

By the end of March, there were 44 domestic waste treatment facilities in Beijing, capable of handling 32,711 metric tons of trash a day, the capital's urban management authorities said. The capital collected 10.11 million tons of household waste last year.

Some residential communities in Beijing have introduced incentives to encourage residents to sort their garbage. Residents can earn points by classifying their domestic waste correctly and then exchange the points they accumulate for daily necessities such as napkins and soap.

Wei Li, a residential community director in the capital's Haidian district, said her community had explored new ways of reusing kitchen waste as fertilizer for the residents' rooftop garden.

She said the community acquired a trash treatment machine last year from Shanghai－the first Chinese city to implement compulsory trash sorting－that can recycle some kitchen waste not containing oil, salt or water through compression, dehydration and fermentation to produce organic soil in 24 hours as fertilizer for potted plants.

"At present, the trash sorting treatment facility can process about 1,000 kilograms of kitchen waste every day, which can be converted to about 100 kg of nutrient-rich soil," Wei said.

"I hope to use the treatment facility to make residents more familiar with the processing of garbage and spur their enthusiasm for trash sorting."