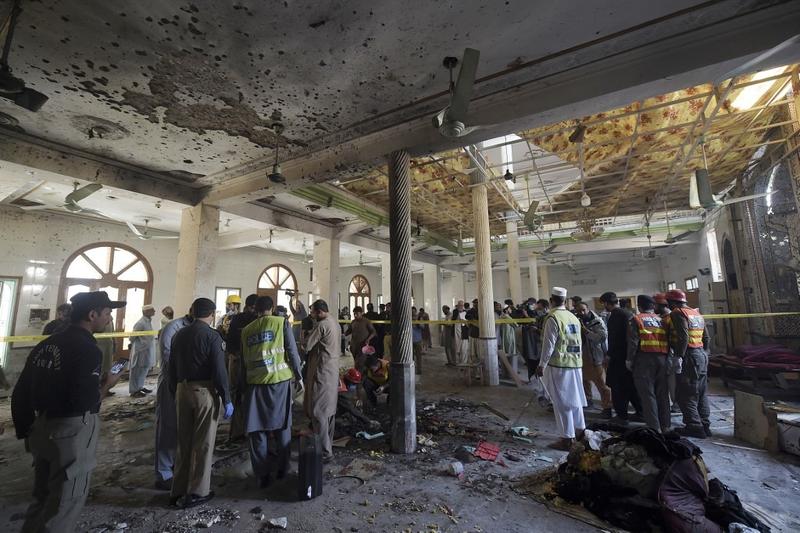 Security officials examine the site of a blast at a religious school in Peshawar on Oct 27, 2020. (PHOTO / AFP)

ISLAMABAD - Seven students were killed and over 120 people including students were injured when a bomb went off inside a seminary in capital city Peshawar of Pakistan's northwestern Khyber Pakhtunkhwa province on Tuesday morning, hospital sources and police said.

Tariq Burki, associate hospital director of Lady Reading Hospital in Peshawar told Xinhua that they have received seven bodies and 90 injured people at the hospital while there are some 30 more under treatment in other hospitals.

The official added that five among the injured suffered serious burn injuries and are in a critical condition.

Tariq Burki, associate hospital director of Lady Reading Hospital in Peshawar told Xinhua that they have received seven bodies and 90 injured people at the hospital while there are some 30 more under treatment in other hospitals

"Fifty percent wounded people we received at the hospital got burn injuries, and others were hit by ball bearings and other stuff in the explosion," Burki said, adding that a state of emergency has been declared at the hospital.

The explosion happened with the detonation of an improvised explosive device concealed inside a school bag, Senior Superintendent of City Police in Peshawar Waqar Ahmad told Xinhua.

The bag carrying about five to eight kg of explosives was placed by militants inside the seminary, he said, adding that further investigation is being made into the incident and they are trying their best to nab the militants involved in the incident.

"The area where the blast happened is among the vulnerable areas of the city. Police teams frequently patrol in the area, and we also issue advisories to residents to keep an eye on their surroundings and tell us about any suspected person or activity. Tuesday's incident was a security lapse on a soft target, and we have enhanced security on other soft and sensitive areas across the city in the wake of the incident," Ahmad said.

A large number of students inside the seminary were attending their routine morning classes when the explosion happened inside one of the halls of the institution.

Sher Gul, zonal head of rescue organization Edhi Foundation in Peshawar, told Xinhua that the age of the victim students were between 15 to 18 years, some of whom were badly burnt and injured when they reached at the site to conduct rescue work.

Gul added that fire erupted in the seminary after the blast due to some chemical used in the explosive device, which was contained by the rescue teams and volunteers from the colony, but it seriously affected the students and the building.

He said that after the completion of the rescue work, police sealed the seminary and its adjoining area for investigation.

Meanwhile, Kamran Bangash, the special advisor to the chief minister of Khyber Pakhtunkhwa on information technology, said that a threat alert was issued by the intelligence agencies for possible terrorist attacks in Khyber Pakhtunkhwa and Balochistan provinces, adding that after Tuesday's incident the security in Peshawar and across the province has been further beefed up.

The Pakistani prime minister expressed sorrow over the loss of precious lives in the incident and wished a speedy recovery of the injured people, the Prime Minister Office said in a statement.

No group or individual has claimed the attack yet.