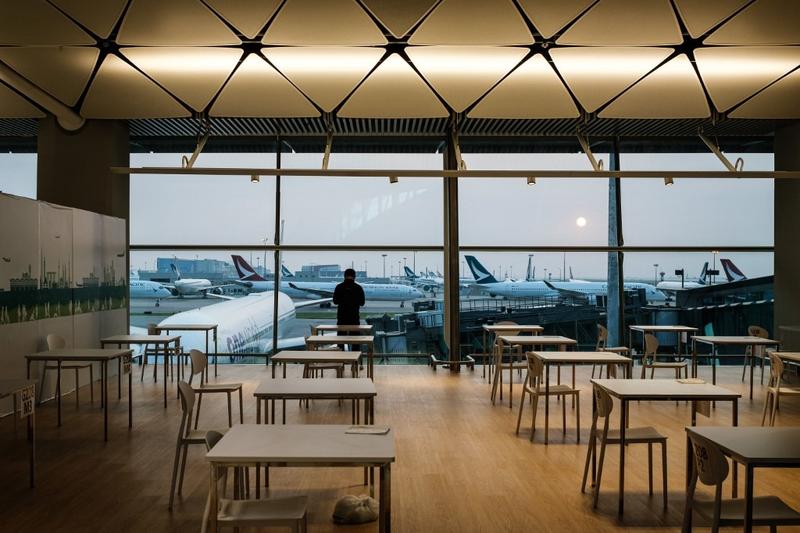 In this picture taken on Oct 4, 2020, a man waits for the results of a mandatory COVID-19 coronavirus test given to all new arrivals, while standing at a window with a view of parked Cathay Pacific and Cathay Dragon passenger jets on the tarmac at Hong Kong International Airport. (ANTHONY WALLACE / AFP)

All of the new cases were imported, according to a press release issued by the Centre for Health Protection (CHP) of the Department of Health.

The new cases involved patients aged between 5 and 51. Two of them were from India and have stayed in Ramada Hong Kong Grand View hotel in North Point after arriving in Hong Kong, the CHP said.

The remaining cases were from Indonesia, Pakistan, Serbia, the Czech Republic, Russia, and France, respectively, according to the release. One of them has visited Dorsett Tsuen Wan.

A total of 111 patients are still being treated in hospitals, including 12 in critical condition, according to the Hospital Authority.

Also on Monday, the Transport Department announced that a new round of free COVID-19 testing service will be provided to taxi and minibus drivers starting from Tuesday.

The service will run for two weeks and is a part of the government’s strategy to prevent and fight the epidemic. Two other rounds of testing were provided to taxi and minibus drivers in mid-July and early October, respectively.

Eligible drivers can visit the specific temporary distribution center to collect the testing kit upon presenting their valid taxi or public light bus driver identity plate. They are required to register their personal information at the government website, and return their deep throat saliva specimen to the temporary collection center on the same day.

They will be notified by the government of the negative test result by SMS through mobile phone, while cases with positive test results will be relayed to the CHP for follow-up, according to a press release issued by the department.

Taxi drivers can collect a tag from the relevant taxi trade organizations with the SMS indicating the negative test result and display the tag inside the taxi compartment to enable passengers' checking.