Israel, Sudan reach accord as Netanyahu signals deal on F-35s 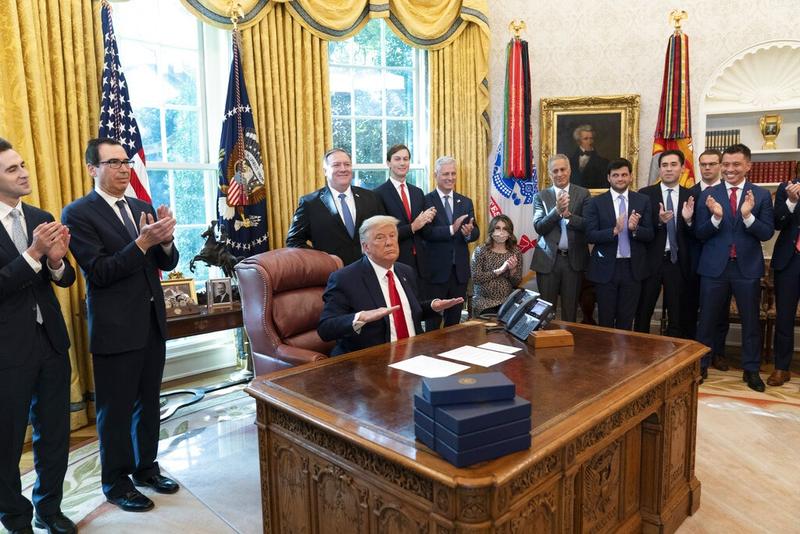 US President Donald Trump reacts after hanging up a phone call with the leaders of Sudan and Israel, as Treasury Secretary Steven Mnuchin, second from left, Secretary of State Mike Pompeo, White House senior adviser Jared Kushner, National Security Adviser Robert O'Brien, and others applaud in the Oval Office of the White House, Oct 23, 2020, in Washington. (ALEX BRANDON/AP)

President Donald Trump announced Friday that Israel and Sudan agreed to a peace deal, following on accords his administration helped negotiate between the Jewish state and the United Arab Emirates and Bahrain.

“The state of Israel and the Republic of Sudan have agreed to make peace,” Trump told reporters in the Oval Office, where he said he was on the phone with Israeli Prime Minister Benjamin Netanyahu and two Sudanese leaders. “It’s peace in the Middle East without bloodshed,” Trump added.

Without specifically naming the F-35, Netanyahu’s government said it wouldn’t try to block the sale of “certain weapon systems” to the UAE

In a separate announcement at the same time, Israel signaled it won’t oppose a US move to sell its most advanced jet fighter, Lockheed Martin Corp’s F-35, to the UAE, a significant boost to the Gulf nation. Without specifically naming the F-35, Netanyahu’s government said it wouldn’t try to block the sale of “certain weapon systems” to the UAE.

“The Prime Minister and the Defense Minister both agree that since the US is upgrading Israel’s military capability and is maintaining Israel’s qualitative military edge, Israel will not oppose the sale of these systems to the UAE,” according to a joint statement from the Israeli prime minister and defense minister’s office.

The announcement of the Sudan-Israel peace deal follows months of discussions between US officials and the transitional government of the North African nation where long-time leader Omar al-Bashir was overthrown last year. Netanyahu also met with Sudan’s de facto leader, Abdel Fattah al-Burhan, in Uganda in February, spurring speculation of a shift in Khartoum.

The progress on the F-35 deal and the Sudan peace announcement capped a dizzying period of US diplomatic efforts in the region as Trump, eager to chalk up foreign policy victories ahead of the Nov 3 election, prodded countries to recognize Israel. The UAE and Bahrain signed landmark deals recognizing Israel just last month at the White House.

Seen together, Friday’s announcements highlighted how a wave of normalization deals are not only helping to strengthen Israel diplomatically, but are also conferring benefits on Arab countries that choose to cut the Gordian knot on ties with the Jewish state, while opening up new markets for US weapon sales.

The accords also bolster Netanyahu, who has seen his support flag amid corruption investigations and his government’s handling of the COVID -19 pandemic.

Friday’s announcements highlighted how a wave of normalization deals are not only helping to strengthen Israel diplomatically, but are also conferring benefits on Arab countries that choose to cut the Gordian knot on ties with the Jewish state

“Today we announced another dramatic breakthrough to peace, another Arab state that joins the circle of peace,” Netanyahu said. “Soon delegations from Sudan and Israel will meet to discuss cooperation in many areas, including agriculture, trade and other important sectors to our citizens.”

The Palestinian presidency’s office issued a statement lambasting the deal and rejecting “normalization of relations with the Israeli occupation state that usurps the land of Palestine”. Hazem Qassem, a Hamas spokesman, said that the normalization “is a political sin and harms our Palestinian people and their just cause, and even harms the national interests of Sudan.”

Iran’s Foreign Ministry twitttered on Saturday that he US-brokered Sudan-Israel deal to normalise ties is “phony” and was secured by a “ransom”.

“Pay enough ransom, close your eyes to the crimes against Palestinians, then you’ll be taken off the so-called ‘terrorism’ blacklist,” the ministry tweeted. “Obviously, the list is as phony as the US fight against terrorism. Shameful.”

However, Trump predicted that more countries in the region will soon join the movement to reach peace accords in Israel, including Saudi Arabia and even Iran -- a nation the agreements are intended to isolate.

“I think ultimately Iran will maybe become a member of this whole thing,” he said. “I’d love to help Iran, I’d love to get Iran back on track. They just can’t have nuclear weapons, that’s all.”

Trump withdrew from the nuclear deal his predecessor, Barack Obama, negotiated with Iran and has re-imposed crushing economic sanctions on the Islamic Republic. Iran’s leaders have vowed not to re-enter talks with the US until it rejoins the 2015 accord.

On Monday Trump said he planned to remove Sudan from the US list of state sponsors of terrorism after the African nation agreed to make a long-sought payment of US$335 million to American terrorism victims and their families. It’s not clear who is helping Sudan make that payment, which would be a significant outlay for the country.

ALSO READ: UAE ministers to arrive in Israel for first visit on Tuesday

Netanyahu said that the Sudan deal “truly changes the region, it changes the lives of all our people for the better.” But he demurred when Trump asked him whether his re-election opponent, former Vice President Joe Biden, could have negotiated the same deal.

“We appreciate the help for peace from anyone in America,” Netanyahu said. With the US election just 11 days away, the remark may have been deft diplomacy on Netanyahu’s part: Biden leads Trump in public polls by about eight percentage points nationally, on average, according to RealClearPolitics.