Upgrading Xiamen on both sides of the water 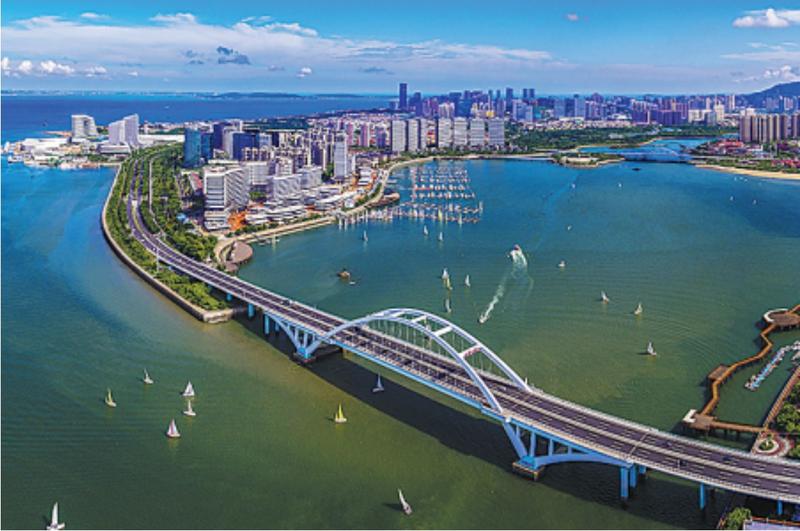 Wuyuan Bay in Xiamen's Huli district on the main island is home to a group of international companies. (PHOTO PROVIDED TO CHINA DAILY)

Xiamen, an island city in East China's Fujian province, is ramping up efforts to promote its overall city construction by accelerating coordinated development.

In 2002, Xiamen rolled out its urban development blueprint, focusing on cross-island development by integrating the main island and its four districts Jimei, Haicang, Tong'an and Xiang'an in the city's mainland.

After 18 years of development, the city has seen great progress in its integrated development of urbanization, industrial structure, public service and ecological construction.

Official data show Xiamen has expanded its urban areas from 94 square kilometers in 2002 to 397.84 sq km in 2019. The ratio of people living in the urban area has increased from 52 percent to 89.2 percent.

During the same period, its regional GDP jumped from 64.8 billion yuan (US$9.71 billion) to 599.5 billion yuan, with 47.6 percent contributed by the four mainland districts.

In May, the city government held a conference on further promoting development of the city as a special economic zone.

By 2022, the city is expected to achieve its GDP per sq km to 2.55 billion yuan, ranking top in the province, it was announced at the conference.

Xiamen will build its urban areas into centers for innovation and finance so as to become models for other cities in the country.

In addition, the GDP of its four mainland districts is expected to account for more than 55 percent of the city's total.

The proportion of fixed investment and industrial added value will surpass 80 percent.

To date, its four districts acting as city subcenters on the mainland have become new growth points of Xiamen's economic development.

The development of new urban areas has helped to enhance Xiamen's functions and competitiveness as a city, laying a solid foundation for it to become more modern and international, local officials said.

The development of new urban areas has helped to enhance Xiamen's functions and competitiveness as a city, laying a solid foundation for it to become more modern and international, local officials said.

In the past year, Xiamen has attracted 3,199 commercial projects, with a total investment estimated at 1.4 trillion yuan, official data show.

In the first half of 2020, Xiamen's GDP bucked the trend in that period, increasing by 0.6 percent year-on-year.

Compared with the whole province, the actual use of foreign capital and per capita disposable income of rural residents rank top.

Hu Changsheng, Party secretary of Xiamen, said the city will continue to improve business environment in line with advanced standards at home and abroad.

It will also inject impetus for company development and foster the momentum of high-quality development, Hu said.

Xiang'an district is now home to headquarters of companies. It is building five significant projects including two subway lines and an airport.

Apart from the mainland districts, the city has also made strides in upgrading its main island.

The central downtown area of Siming district has introduced a batch of high-tech companies and has targeted development through technologies including 5G, blockchain and artificial intelligence.

Xiamen's integrated development can also be seen in its social welfare and public services.

The city has integrated many of its services for residents in both urban and rural areas such as medical insurance, education and public infrastructure.

Compulsory education graduates in mainland areas have surpassed those in the main island, accounting for 57.1 percent of the city's total. The number of large and medium-sized public facilities in mainland areas has also topped the main island since 2017, accounting for nearly 50 percent of the city's total, according to local officials.

With the city's cross-island development, more people are choosing to work and live in the mainland districts, local officials said.

In 2018, the population in the main island has declined to 49.8 percent of the city's total.

READ MORE: Xiamen to go all out to attract investment