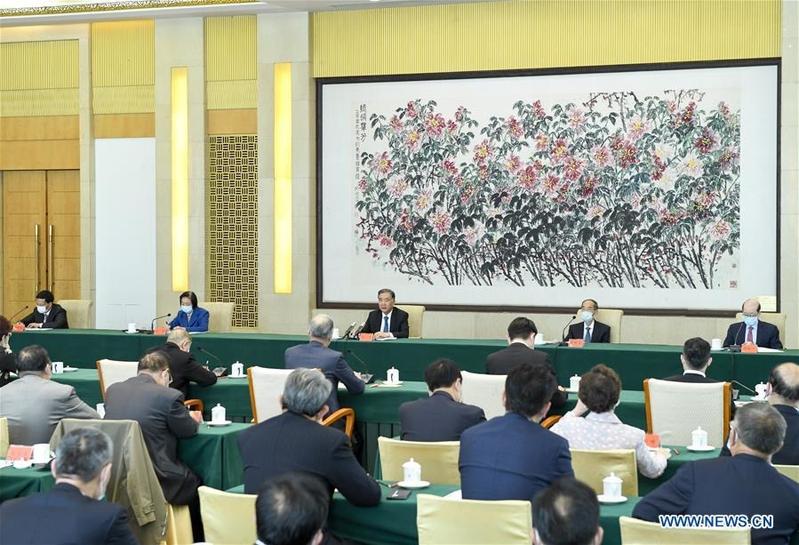 Wang Yang, a member of the Standing Committee of the Political Bureau of the Communist Party of China Central Committee and chairman of the Chinese People's Political Consultative Conference National Committee, attends an academic seminar commemorating the 75th anniversary of the country's recovery of sovereignty over Taiwan from 50-year Japanese occupation, in Beijing, capital of China, Oct. 22, 2020. (GAO JIE/ XINHUA)

China will never allow Taiwan to be separated from the motherland, Wang Yang, chairman of the National Committee of the Chinese People's Political Consultative Conference, China's top political advisory body, said at a seminar in Beijing on Thursday.

The seminar was held to commemorate the 75th anniversary of the liberation of Taiwan, the end of Japanese rule of Taiwan and Penghu islands and the return of Taiwan to the motherland on Oct 25, 1945. It was joined by about 100 representatives from across the Taiwan Straits.

The seminar was held to commemorate the 75th anniversary of the liberation of Taiwan, the end of Japanese rule of Taiwan and Penghu islands and the return of Taiwan to the motherland on Oct 25, 1945

Wang, also a member of the Standing Committee of the Political Bureau of the Communist Party of China Central Committee, said that 75 years ago, victory in the War of Resistance Against Japanese Aggression (1931-45) and the recovery of Taiwan completely wiped out the humiliation of the Chinese nation.

"It effectively safeguarded national sovereignty and territorial integrity, which is a glorious chapter in the annals of history," he said.

"The recovery irrefutably proves that Taiwan is an inalienable part of Chinese territory," he said, adding that although the two sides have not been completely unified, the fact that the Chinese mainland and Taiwan belong to one and the same China has never changed.

Wang said that some secessionist forces in Taiwan rely on foreign forces and continue to carry out provocations in pursuit of "independence", which causes tension and instability in cross-Straits relations.

"It is the greatest blasphemy against the martyrs who sacrificed their lives for the restoration of Taiwan," he said.

He said that it is the common responsibility of all the Chinese nation, including Taiwan compatriots, to promote the peaceful reunification of the motherland.

Wang Yang said that it is the common responsibility of all the Chinese nation, including Taiwan compatriots, to promote the peaceful reunification of the motherland

"We must adhere to the 1992 Consensus, which embodies the one-China principle, firmly oppose 'Taiwan independence' forces and their separatist acts, and never allow the regained sacred territory to be lost again," he said.

Wang called on people to work together to promote economic integration and deepen cultural and people-to-people exchanges between the two sides.

"We should be highly vigilant against desinicization attempts by the Democratic Progressive Party authorities, vigorously promote the patriotic tradition of Taiwan compatriots and strengthen research on the history of people-to-people exchanges across the Taiwan Straits," he said.

The Chinese mainland will continue to enhance Taiwan residents' national, ethnic and cultural identity and strengthen the spiritual bond between compatriots on both sides of the Straits, he added.

Wang called on compatriots on both sides to unite as one to promote the reunification of the motherland and realize the great dream of national rejuvenation.

Liu Jieyi, head of the Taiwan Affairs Office of the State Council, said the current cross-Straits relations situation is very difficult, with the fundamental reason being that a small number of secessionists in Taiwan have colluded with foreign forces for "Taiwan independence".

He called on compatriots in Taiwan to clearly see the general trend and work with compatriots on the mainland to resolutely oppose "Taiwan independence" and jointly realize the bright prospect of peaceful reunification.

Yok Mu-ming, honorary and former chairman of Taiwan's New Party, said Tsai Ing-wen, who leads the Democratic Progressive Party－the ruling party of Taiwan－has been making provocations against the mainland and creating the risk of war, which will harm the younger generation of Taiwan.

Young people in Taiwan should think about their own future, strive for peace across the Taiwan Straits and contribute to the great cause of national reunification, he said.