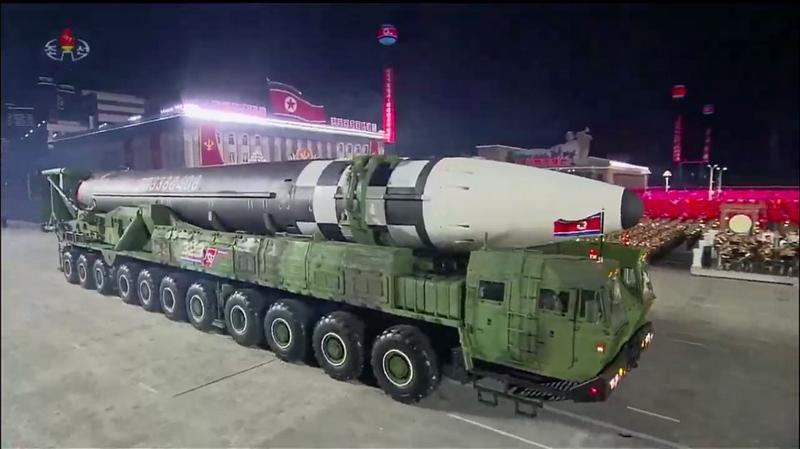 A screen grab taken from a KCNA broadcast on October 10, 2020 shows what appears to be a new DPRK intercontinental ballistic missile during a military parade marking the 75th anniversary of the founding of the Workers' Party of Korea, on Kim Il-sung square in Pyongyang. (KCNA VIA KNS / AFP)

According to the report, Kim Jong-un, chairman of the WPK, attended the event held at the Kim Il-sung Square and delivered a speech.

Noting that the people of the DPRK have always supported the Party over the past 75 years, Kim, also chairman of the State Affairs Commission and commander-in-chief of the armed forces of the DPRK, said "it is our Party's and my first and foremost mission and steadfast will to firmly defend our people, hold them in greater respect and make them lead a happy life envying nothing."

During the speech, he vowed to strengthen self-defense war deterrence to contain and control all the dangerous attempts and intimidatory acts by the hostile forces, "including their sustained and aggravating nuclear threat."

He also said that WPK will administer and expand the "advantageous policies and measures," which are aimed at improving the people's wellbeing and providing more benefits for them, and bring "as earlier as possible the ideal society of prosperity that our people are dreaming of."

"The Eighth Congress of the Workers' Party of Korea will advance plans and detailed targets for doing it, and our Party's struggle for providing the people with happiness will develop onto a new stage," according to the full text of his speech offered by the KCNA.

During the parade, troops were shown in the square in the city center with newly developed strategic weapons and other military weapons.

The previously unseen intercontinental ballistic missiles at the parade showcased the country’s long-range weapons for the first time in two years.

Analysts said the missile, which was shown on a transporter vehicle with 11 axles, would be one of the largest road-mobile intercontinental ballistic missiles in the world if it becomes operational.

Also displayed were the Hwasong-15, which is the longest-range missile ever tested by DPRK, and what appeared to be a new submarine-launched ballistic missile.

On Sunday, the Republic of Korea presidential office said that inter-Korean agreements preventing armed clashes must be kept.

In a separate statement, Seoul’s Unification Ministry, which handles cross-border affairs, said Kim's speech expressing wishes for future cooperation between the neighbors would lead to peace and better ties.