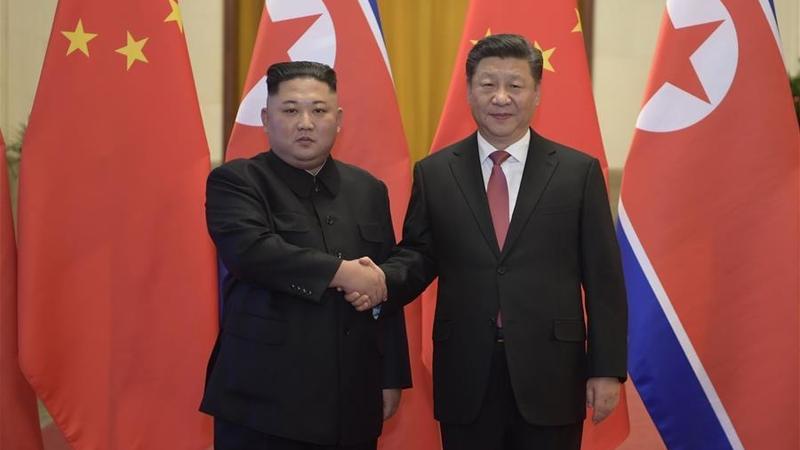 Xi Jinping (right), general secretary of the Central Committee of the Communist Party of China and Chinese president, holds a welcoming ceremony for Kim Jong-un, chairman of the Workers' Party of Korea and chairman of the State Affairs Commission of the Democratic People's Republic of Korea, before their talks at the Great Hall of the People in Beijing, capital of China, Jan 8, 2019. (PHOTO / XINHUA)

BEIJING - Chinese President Xi Jinping on Friday congratulated Kim Jong-un, top leader of the Democratic People's Republic of Korea (DPRK), on his re-election as chairman of the State Affairs Commission (SAC) of the DPRK.

The DPRK's economic and social development has continuously made new progress in recent years, with its socialist cause entering a new stage in history, Xi said

In his message, Xi said Kim's re-election as SAC chairman at the First Session of the 14th Supreme People's Assembly demonstrated the trust in and support for Kim from the Party and people of the DPRK, and extended warm congratulations and sincere wishes to Kim.

It is delightful to see that under the leadership of Kim, the DPRK's economic and social development has continuously made new progress in recent years, with its socialist cause entering a new stage in history, Xi said.

The Chinese president said he believes that under the guidance of Kim's new strategic line, the people of the DPRK will make bigger achievement in various undertakings on national construction and development.

Calling China and the DPRK friendly neighbours linked by mountains and rivers, Xi said he attaches great importance to the China-DPRK relations.

Xi recalled that since last year, he has met with Kim four times and reached a series of important consensuses, which jointly opened a new chapter for China-DPRK relations.

The Chinese president said he is willing to work together with the chairman, taking the opportunity of the 70th anniversary of the establishment of diplomatic relations between the two countries, to further push forward the development of China-DPRK relations so as to bring more benefits to the two countries and peoples.