Pain in proximity as pandemic pushes up domestic abuse in HK 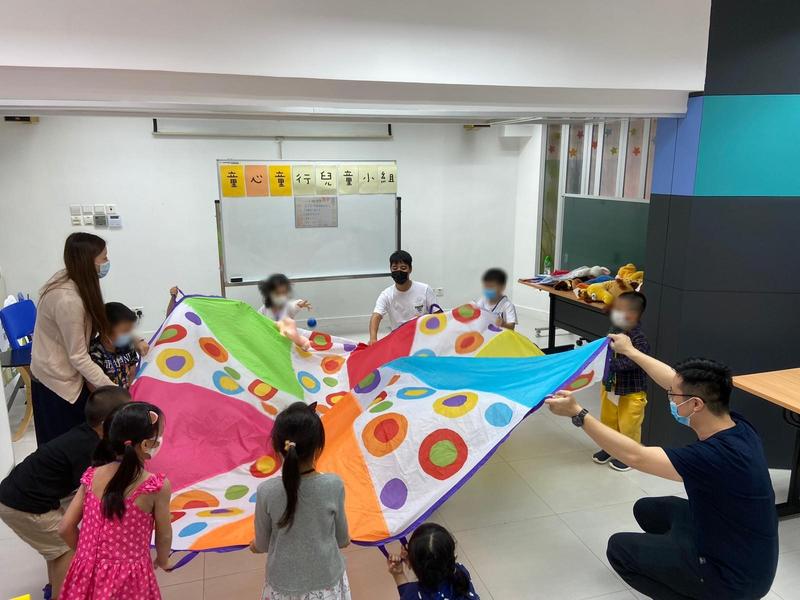 Children aged 4 to 6 affected by family conflicts attend an event organized by Harmony House in late May, 2020. (PHOTO PROVIDED TO CHINA DAILY)

Family time may be precious for most of us but for victims of domestic violence, staying cooped up in Hong Kong’s notoriously small homes with perpetrators during the COVID-19 pandemic is no domestic bliss.

Local NGO Harmony House received 8,250 calls related to domestic abuse and family conflict over its hotline from January to August this year, a 9-percent year-on-year increase, according to data shared with China Daily.

The NGO, founded in 1985 as the city’s first shelter for abused women and their children, also said 173 families had been admitted to their shelter in the first eight months, 35 percent more than last year. 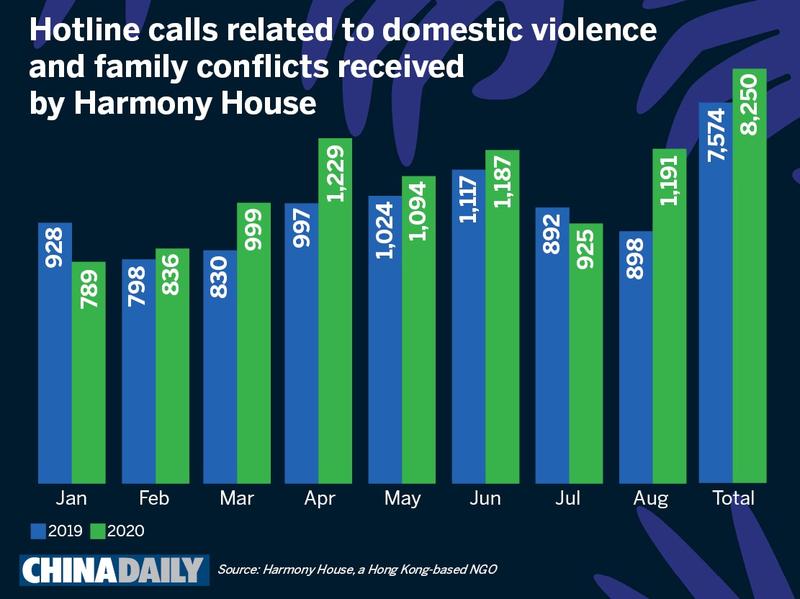 Margaret Wong Fung-yee, head of the Department of Social Work at Hong Kong Shue Yan University, said that for families with already-strained relationships or with a history of violence, forced proximity could increase the likelihood of confrontations.

There is a need for extra boarding spaces or shelters since existing shelters for victims may not be able to meet social distancing requirements, Wong said in an emailed reply to China Daily.

Susanna Lam Siu-mun, senior community education officer of Harmony House, also said in an email that while domestic violence is not something that victims can deal with on their own, during the pandemic, some refused to seek help for fear of getting infected from sharing facilities with strangers at shelters.

In addition to NGO-operated shelters, Hong Kong currently has five refuge centers for women and their children facing domestic violence or family crisis, according to the Social Welfare Department. 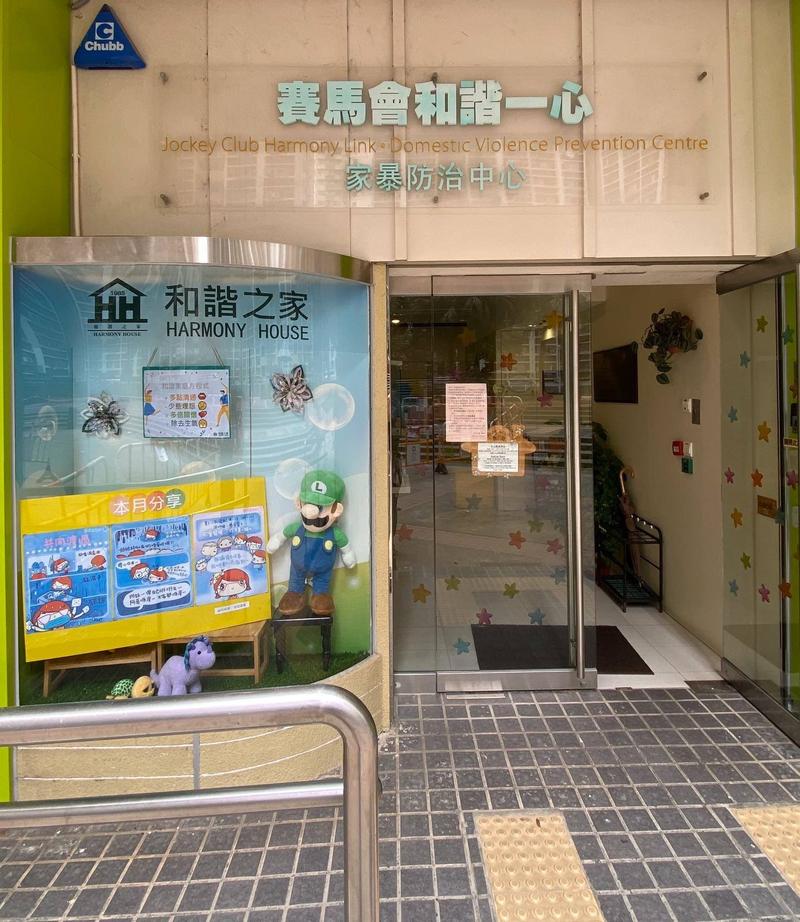 Lam said many local low-income or even middle-class families are struggling with great financial uncertainties amid the health crisis, and therefore, are more likely to encounter family conflicts or even violence. 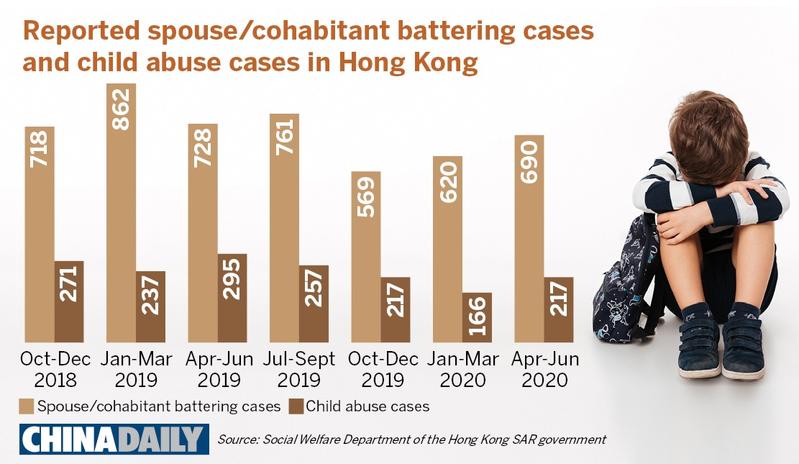 As per latest Census and Statistics Department data, Hong Kong’s unemployment rate stood at 6.1 percent between June and August, which translates into 248,000 people being out of work. During the same period, underemployment rate was at its post-SARS high of 3.8 percent. Hong Kong’s GDP contracted 9 percent year-on-year for the second quarter of 2020, and the government expected a full-year contraction between 6 percent and 8 percent.

Child abuse increases both because of increases in parenting stress and because children already living in abusive families may not have many options to escape, and spend more time with potentially abusive family members.

Clifton Emery, associate professor of Social Work and Social Administration at the University of Hong Kong

In each category, a rising trend has been seen in the first seven months of this year, according to police data. In July alone, 127 complaints were registered as crime. Back in February, only 57 cases were registered under this head. Although data have already indicated an uptick in family violence in Hong Kong in the past months, complaints received by NGOs outnumber those registered by the government.

Lam said it is not easy for victims to initially identify domestic violence as the abuse often starts subtly and gets worse over time.

Clifton Emery, associate professor of Social Work and Social Administration at the University of Hong Kong, said underreporting is a very common problem when it comes to domestic violence, and victims, mostly women, choose not to report to police for many reasons.

“They may be brainwashed by the perpetrator into believing that the violence is their fault and that they deserve the abuse. They may be economically dependent on the perpetrator and afraid of losing support,” Emery said in an emailed response.

He added that victims may have been threatened with death or with harm to their children if they try to leave, and that some of them may also believe it is better for their children to stay despite violence or that being abused is simply a normal part of life and that there are no alternatives. 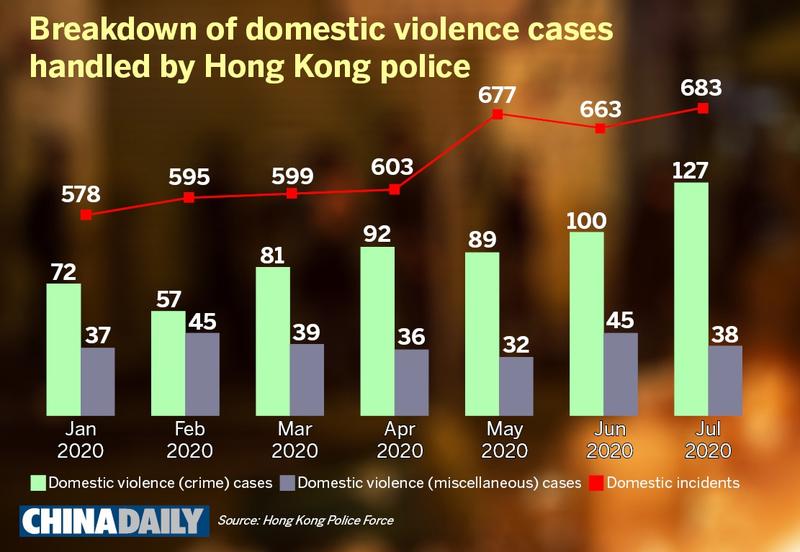 According to another local NGO, Against Child Abuse, in the first quarter of 2020, it received 207 calls for assistance in dealing with child abuse, up 25 percent from a year ago. In March alone, the organization received 104 such complaints, a 50 percent year-on-year increase.

As the pandemic worsened in the second quarter, the Social Welfare Department registered 217 cases of child abuse, 30 percent higher than in the first quarter.

The reasons for increasing child maltreatment could be different from those for general family violence, Emery said. “Child abuse increases both because of increases in parenting stress and because children already living in abusive families may not have many options to escape, and spend more time with potentially abusive family members.”

Compounding this problem is that parents may have to be forced to leave children with inadequate caregivers, or alone, when they leave home for work, which results in increased probability of severe harm from accidents, he said.