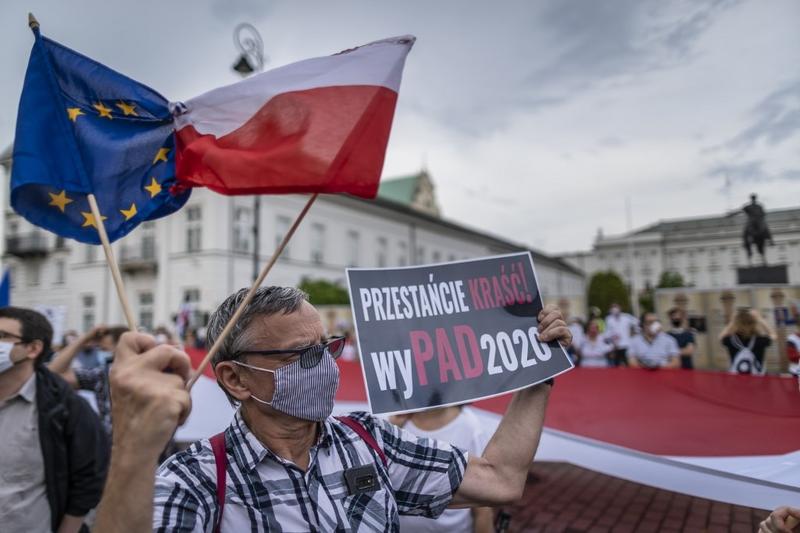 In this June 20, 2020 photo, a man holds flags of Poland and EU and a placard reading "Stop stealing - Get out" during an anti-government demonstration one week ahead of the presidential election in Warsaw. (WOJTEK RADWANSKI / AFP)

BRUSSELS - The European Union’s executive slammed Poland and Hungary on Wednesday for failing to live up to core democratic standards, giving ammunition to those in the bloc pushing to shut them out from funding unless they beef up freedom of media and courts.

Warsaw and Budapest are at odds with the EU over undercutting democracy through putting courts, media, NGOs and academics under more state control

The European Commission’s first report on shortcomings in the rule of law comes as the bloc is making access to EU money, including a new 750 billion euro coronavirus recovery fund, conditional on respecting democratic checks and balances.

The report also noted challenges to media independence and fighting corruption, saying the pandemic served as a “stress test” of democratic resilience of the 27 EU states.

“Poland’s justice reforms since 2015 have been a major source of controversy,” it said, while in Hungary, “the direction of change has given rise to serious concern” about judicial independence.

Warsaw and Budapest are at odds with the EU over undercutting democracy through putting courts, media, NGOs and academics under more state control.

Prime Minister Viktor Orban called for Jourova to be dismissed after she said his vision of “illiberal democracy” was in fact spearheading an “ailing democracy” in Hungary. The Commission snubbed him.

Bulgaria, Romania, Croatia and Slovakia were also criticised for shortcomings in ensuring their courts’ independence. The Commission decried corruption scandals in Bulgaria, Slovakia, Croatia, the Czech Republic, Hungary and Malta.

It said some governments’ coronavirus emergency measures went too far in restraining the media and civil society.

Also on Wednesday, a majority of the bloc’s 27 states approved a proposal by current chair Germany over how exactly to make EU handouts conditional on upholding the rule of law.

That will underpin negotiations with the European Parliament starting next month on measures governing 1.8 trillion euros in aid from the recovery fund and the EU’s next budget for 2021-27.

That position is shared by most EU lawmakers, whose consent is needed to get money flowing. The European Parliament’s member leading the file, Finland’s Petri Sarvamaa of the centre-right European People’s Party, told Reuters:

“It’s going to be a very, very difficult and tough negotiation.”

The bloc’s attempts to force Warsaw and Budapest to change tack on the rule of law have so far largely failed. The two shield each other from major punishment because the EU now requires unanimity to suspend an offender’s voting rights.

Some 40 EU law experts this week wrote to the Commission demanding action on the Polish courts.

“The rule of law in Poland is not merely being attacked. It is being destroyed in plain sight,” they said.

Hungary has threatened a veto if its EU funding comes under threat. A government spokeswoman said: “This is not rule of law; this is the rule of blackmail.”