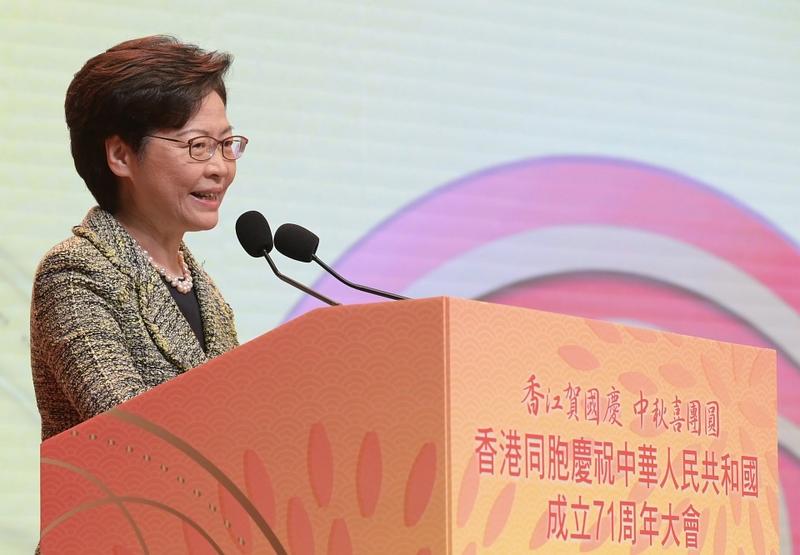 Chief Executive Carrie Lam Cheng Yuet-ngor speaks at a gala in celebration of the 71st anniversary of the founding of the People's Republic of China on September 30, 2020. (PHOTO / HKSAR GOVT)

HONG KONG - Chief Executive of the Hong Kong Special Administrative Region (HKSAR) Carrie Lam Cheng Yuet-ngor said Wednesday that Hong Kong is closely linked to the motherland, and the prosperity of the country has brought boundless vitality to Hong Kong.

The affection for one's family and country is a fine tradition of the Chinese nation, said Lam while addressing an event celebrating the 71st anniversary of the founding of the People's Republic of China.

She said that everyone should take pride in the country's rapid development and take it as his or her duty to safeguard national security.

China has made remarkable achievements in various fields since its founding, not only becoming the second largest economy in the world, but also playing an important role in the world, she said.

"Since its return to the motherland, Hong Kong has successfully implemented 'one country, two systems', 'Hong Kong people administering Hong Kong' and a high degree of autonomy. With the support of the country, Hong Kong's economy has continued to expand and people's livelihood has improved. In recent years, the country's Belt and Road Initiative and development of the Guangdong-Hong Kong-Macao Greater Bay Area have brought tremendous opportunities to Hong Kong."

China has made remarkable achievements in various fields since its founding, not only becoming the second largest economy in the world, but also playing an important role in the world, Chief Executive Carrie Lam Cheng Yuet-ngor said

Lam pointed out that last year's social unrest hit Hong Kong's economic and social development to some extent. But thanks to the support and assistance of the central government, Hong Kong is gradually getting back on track.

The legislation of the national security law in HKSAR by the Standing Committee of the National People's Congress in June and its inclusion in Annex III to the HKSAR Basic Law have restored social stability in Hong Kong, guaranteed safety of life, fundamental rights and freedoms of the vast majority of law-abiding residents in Hong Kong, ensured the implementation of "one country, two systems" and the long-term prosperity and stability of Hong Kong, she said.

"In the fight against the COVID-19 epidemic, the central government provided various assistance, including arranging support teams to assist the HKSAR government to successfully carry out a large-scale universal community testing program this month, and helped Hong Kong successfully contain the third wave of the epidemic,” Lam said.

“To strengthen Hong Kong's anti-epidemic capability, two other support projects -- a community treatment facility and a temporary hospital -- have been successfully launched. We sincerely thank the central government for its support to Hong Kong.”

In the coming year, the HKSAR government still have a lot to do both in combating the epidemic and in restoring the economy. But with the strong support of the central government and the concerted efforts of all sectors, Hong Kong will surely meet the challenges, Lam added.