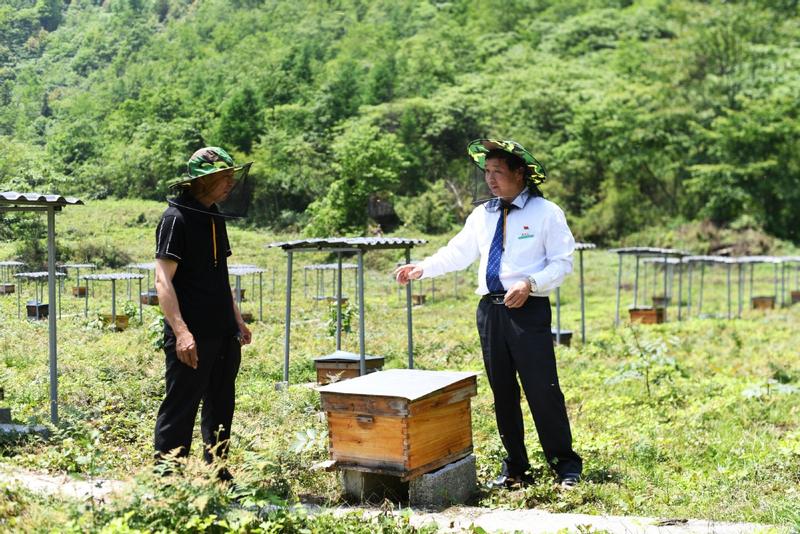 In this undated photo, an employee of the Agriculture Bank of China holds discussions with Li Tingmo (left), a beekeeper in Gaoping village, Wulong district, Chongqing. (PHOTO / XINHUA)

China's banking sector has worked to help combat poverty in various ways as the country is on its way to completing the building of a moderately prosperous society in all respects and eliminating poverty this year.

To ensure that its lending business in poverty-stricken areas meant to alleviate poverty is sustainable, the Agricultural Bank of China insists on carefully selecting industries before the State-owned commercial lender provides loans and other types of financial services. And ABC focuses on leading industries, basic industries and those having distinctive local features and advantages.

In recent years, ABC (the Agricultural Bank of China) has emphasized product differentiation, launched a series of lending products and policies that have regional characteristics and focused on niche markets to support key projects and the development of distinctive industries in poverty-stricken areas.

Zhang Qingsong, Vice-chairman and president of Agricultural Bank of China

The bank has also chosen major infrastructure projects carried out by leading companies in key industries within poverty-stricken areas and relevant small businesses in the upstream and downstream supply chains as key targets for the issuance of poverty alleviation loans, said Zhang Qingsong, vice-chairman and president of ABC.

"In recent years, ABC has emphasized product differentiation, launched a series of lending products and policies that have regional characteristics and focused on niche markets to support key projects and the development of distinctive industries in poverty-stricken areas," Zhang said.

While motivating client managers with incentives to issue poverty alleviation loans to qualified clients, ABC also strengthened supervision of violations of laws and regulations in this regard. By the end of June, its nonperforming loan ratio in 832 key counties for national development-oriented poverty-alleviation work was 0.8 percent, lower than the bank-wide NPL ratio of 1.43 percent.

Industrial Bank also gave full play to its advantages in green finance amid efforts to reduce poverty. It signed strategic cooperation agreements with seven provinces and autonomous regions where the impoverished accounted for a relatively large segment of the local population. Ever since the agreements were signed, it has provided green financing worth 146.9 billion yuan (US$21.5 billion) to step up support for pollution control, ecological restoration of mines, ecotourism and solar power generation.

The bank also helped promote financial services offered by village and township banks in support of agriculture and rural development. 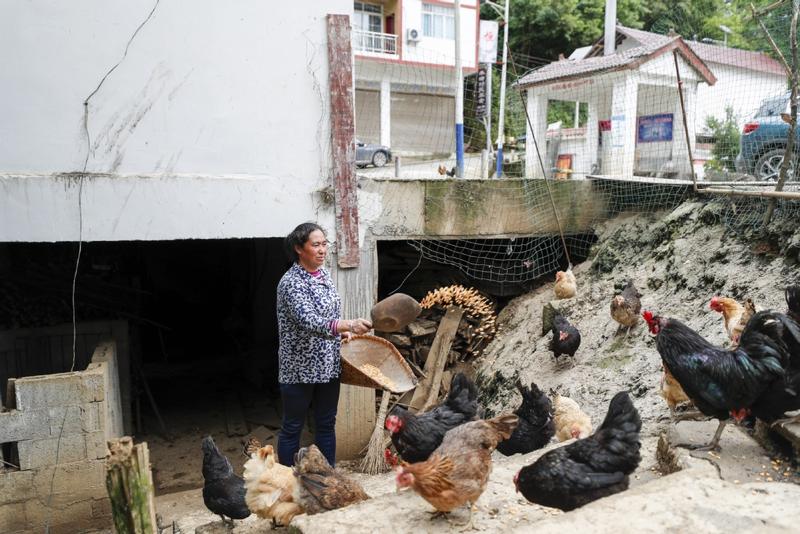 This undated photo shows Li Xianrong, a farmer, feeding chicken at a poultry farm in Mula village in Chongqing. Li began poultry farming with a loan from the Agricultural Bank of China. (PHOTO / XINHUA)"Deeply rooted in the countryside, rural financial institutions－especially village and township banks－have more geographical advantages in promoting agriculture and rural prosperity. However, they are lagging behind national joint-stock commercial lenders in terms of information technology systems supporting business operations and development. The costs are too high for them to build an IT system and hire a large team for IT operations and maintenance," said Tao Yiping, president of Industrial Bank.

To solve this problem, CIB Digital Financial Services Co Ltd, a fintech subsidiary of Industrial Bank, is currently providing IT system construction and custodial services to 188 village and township banks.

Over the past few years, China relocated many people living in inhospitable conditions who had registered for government poverty assistance, and provided them with housing.

To address livelihood issues of these people after relocation, the Agricultural Development Bank of China has deepened cooperation with relevant ministries and local governments on industrial development, increased employment opportunities and improved medical conditions, educational conditions and infrastructure.

"Starting from this year, we will allocate a special lending quota of 120 billion yuan within five years to support follow-up poverty-alleviation programs after relocation," said Qian Wenhui, vice-chairman and president of ADBC.

The money will be spent on post-relocation industrial development and supporting infrastructure improvements for resettlement areas.