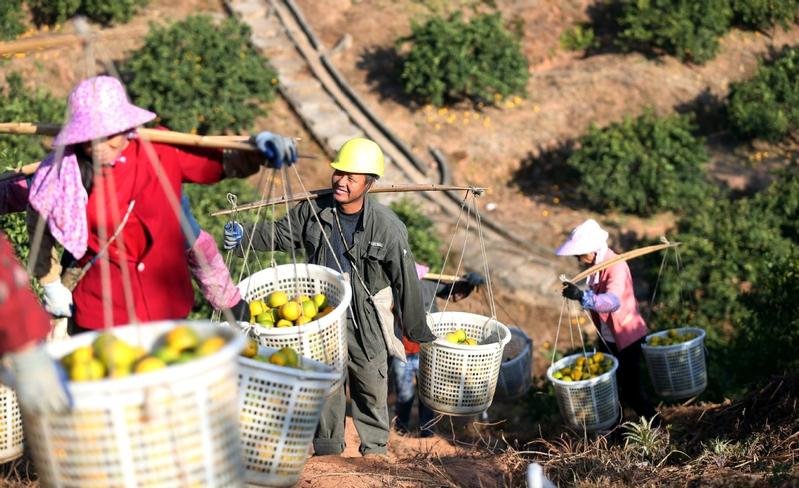 The COVID-19 pandemic will not compromise China's goal to lift all its rural population out of poverty by the end of this year, officials and experts said, with the country scaling up its response measures in job creation and helping with sales of agricultural products.

The country's top leadership, led by President Xi Jinping, has called for resolute policy action to minimize the shock from the pandemic and win the battle against absolute poverty as this year is the final one for China to finish building a moderately prosperous society in all respects.

China, having lifted over 93 million people out of absolute poverty over the past seven years, still has 5.51 million rural residents living below the official poverty line.

China, having lifted over 93 million people out of absolute poverty over the past seven years, still has 5.51 million rural residents living below the official poverty line

Xi, who is also general secretary of the Communist Party of China Central Committee, made poverty reduction a priority in his agenda as the outbreak posed immediate challenges to the country's targets.

He delivered an important speech at a nationwide teleconference on March 6 that called for heightened poverty reduction measures amid challenges from the outbreak.

He visited impoverished mountain areas, communities, households and a tea plantation during a four-day inspection trip to Shaanxi province last week. He underlined the importance of adopting targeted actions to improve the living standards of poor people and establishing mechanisms that prevent poverty from returning.

"I have confidence in attaining the poverty reduction targets this year. What I am more concerned about is whether we can stabilize our achievements and whether we can establish a long-term mechanism," he told officials in Shaanxi.

Qi Gubo, a professor of rural development studies at China Agricultural University, said: "President Xi has extended a message of confidence that China will deliver its target of poverty elimination this year with firm actions."

In doing so, China will at least attain the two goals set in the United Nations 2030 Agenda for Sustainable Development, which are ending poverty in all its forms everywhere and promoting sustained, inclusive and sustainable economic growth, full and productive employment and decent work for all, she said.

She added that China has ramped up its poverty reduction campaign this year despite the fact that its economy has suffered its first contraction in decades.

The central financial authorities allocated special poverty alleviation funds totaling 139.6 billion yuan (US$19.7 billion) for 2020 by the end of March to authorities at lower levels, which was one month earlier than in previous years.

The State Council Leading Group Office of Poverty Alleviation and Development said in a notice released earlier this month that it has launched a special program that aims to facilitate sales of agricultural products totaling 100 billion yuan to aid the poverty reduction campaign this year.

Qi said she also expects a bigger role from the country's special work teams sent to poor villages this year, which usually is comprised of officials from different government departments.

"Their presence at villages helped authorities learn about the real situation and come up with more targeted measures," she said.

The last line of defense, she said, is to include the poor people, especially those suffering from severe impacts from the pandemic, in the country's social security network.

"The country still has many policy tools at its disposal and that is why it is capable of a resounding success to conclude its poverty campaign this year," she said.

Even so, some researchers have highlighted the challenges brought about by the COVID-19 pandemic on the employment of migrant workers, who account for a majority of the income of many poor rural families.

Gan Li, director of the Survey and Research Center for China Household Finance at Southwest University of Finance and Economics, said research by his team on a poor village in Liangshan Yi autonomous prefecture in Sichuan province showed about 70 percent of people who were migrant workers in other areas last year remained at home despite the fact that traffic restrictions had been lifted.

Some factories tasked with poverty alleviation are also faced with a drop in orders and delayed reopening, which has affected the income of households.

To counter the impact from the pandemic, Xi laid out response measures including prioritizing job creation for migrant workers from poor families and employing multiple channels, including e-commerce, to facilitate sales of agricultural products, in his speech at the meeting on March 6.

Chen Hongbo, head of the department of policies, laws and regulations at the State Council Leading Group Office of Poverty Alleviation and Development, told a news briefing on Friday that the authorities have adopted various relief measures, such as helping migrant workers return to their jobs, including in areas close to their homes, and bolstering credit support to poor households, to counter the impact of the pandemic.

Xi has also, on many occasions, underlined the importance of maintaining the stability of policies even after the goals have been met this year.

The authorities should consider a transition period during which aid policies from the authorities will continue and a monitoring mechanism will be established for those having unstable incomes and living on the edge of the poverty line, Xi said at the meeting on March 6.

The mechanism will enable the authorities to adopt precautionary aid measures to prevent a rebound of poverty, he added.

Huang Hanquan, director of the Research Institute of Industrial Economy and Technical Economy at the National Development and Reform Commission, said ensuring the stability of aid policies would be a time-consuming process to transform poor areas and the lives of poor people.

"It would be unrealistic to accomplish all poverty reduction goals at one stroke, and the reaching of the goals does not mean the end of the endeavor," Huang said.

Xi has also stressed the need to synergize poverty reduction with the rural vitalization strategy, which Huang said will be another priority of China's rural policy.

The government could shift from its targeted measures focusing on a special group of people to a more inclusive initiative seeking to benefit the rural population, he said.

The development of rural industries, modernizing the agricultural sector, bolstering rural infrastructure and improving public services, such as healthcare, education and care for the elderly, will be another focus of policymakers, he said.

"The key, however, is to improve the quality of human capital in rural areas, and only by doing so can we boost the development capacities of rural residents," he said.

Chen Zhigang, a senior research fellow at the International Food Policy Research Institute, said Xi has overseen a poverty reduction campaign that is guided by a very mature concept and vision, and the immediate challenges from the pandemic will not derail its goals.

As China moves forward in solving the problem of unbalanced growth and revitalizing its rural areas, it has a lot to share with the international community on its poverty reduction achievements, he said.

"The government's persistent focus on eliminating poverty and rural development, its targeted strategies and its mobilizing of all sectors to help with work in this regard all contributed to the country's resounding success," he said.