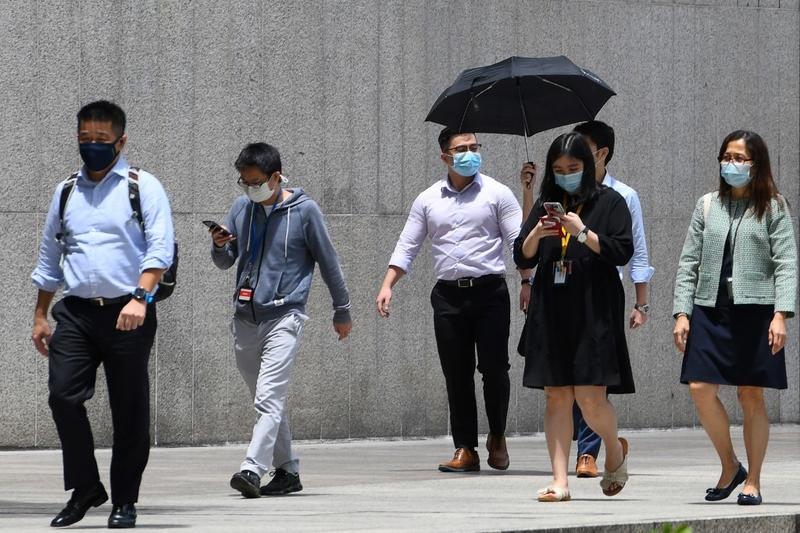 People walk out of their office building as they head for their lunch break in Singapore on Sept 30, 2020. (ROSLAN RAHMAN / AFP)

Both countries have a comprehensive public health surveillance system and have displayed success in controlling the spread of COVID-19, the authority said. The decision comes after Singapore lifted restrictions for travelers from Brunei Darussalam and New Zealand in early September.

Singapore's Ministry of Health (MOH) reported 23 new COVID-19 cases on Wednesday, bringing the total confirmed cases in the country to 57,765.

Of the new cases, four are imported cases, three are community cases and the rest are linked with the dormitories of foreign workers.

There are currently 41 confirmed cases who are still in hospital. Of these, most are stable or improving, and none is in critical condition in the intensive care unit.

Furthermore, 209 are isolated and cared for at community facilities. These are those who have mild symptoms, or are clinically well but still test positive for COVID-19. Altogether 27 people have passed away from complications due to COVID-19 infection. 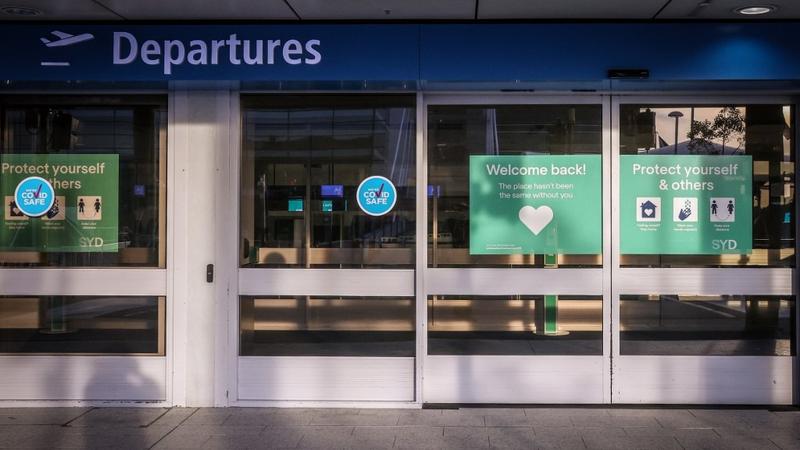 This picture taken on Sept 29, 2020 shows signs relating to COVID-19 displayed at the entrance to the departures area of the Sydney International Airport in Sydney. (DAVID GRAY / AFP)

Australia's Prime Minister (PM) has said that people entering the country from some countries could quarantine at home rather than in hotels.

All international arrivals to Australia have been required to spend two weeks in quarantine at a hotel before being allowed into the community since late-March to prevent the spread of COVID-19.

However, Morrison said on Tuesday that the government was exploring a "more flexible approach."

The official data showed 13,404 samples were tested in the last 24 hours across Bangladesh.

The total number of recovered patients in the country stood at 275,487 including 1,789 new recoveries on Wednesday, said the DGHS.

According to the official data, the COVID-19 fatality rate in Bangladesh is now 1.44 percent and the current recovery rate is 75.79 percent.

Bangladesh reported the highest daily case spike of 4,019 on July 2 and the highest number of deaths of 64 on June 30.

Brunei reported no new cases of COVID-19 on Wednesday with the national tally of cases standing at 146.

According to Brunei's Ministry of Health, no more recoveries were recorded, maintaining the total number of recovered cases at 142. There is still one active case being treated at the National Isolation Center, who was recorded on Sept. 24.

Meanwhile, currently 441 individuals, who have arrived in the country after traveling abroad, are in mandatory isolation at the monitoring centers provided by the government.

There have been three deaths that resulted from COVID-19 in Brunei.

The Democratic People's Republic of Korea (DPRK) has discovered “faults” in its anti-coronavirus measures, state media said on Wednesday, after an outcry in the Republic of Korea (ROK) over a citizen who DPRK soldiers killed near their maritime border where tight virus controls are in force.

The DPRK has not confirmed any coronavirus infections and has imposed strict virus control measures including closing its borders, although the ROK and the United States doubt that it has managed to avoid the pandemic completely.

"The Vice President of India who underwent a routine COVID-19 test today morning has been tested positive. He is, however, asymptomatic and in good health. He has been advised home quarantine. His wife Usha Naidu has been tested negative and is in self-isolation," said a statement posted on social media by Naidu's office.

The 71-year-old Naidu, chairman of the upper house of Indian parliament, attended the monsoon session of parliament, which was cut short after more than 25 lawmakers tested positive for the virus.

The results of India’s second nationwide serological survey, conducted between Aug 17 and Sept 22, showed that 1 in 15 people in the country had been exposed to COVID-19. The prevalence of infections nationwide rose to 6.6% from 0.73% in the first survey done in May, said Balram Bhargava, director general of the Indian Council of Medical Research. The highest rates were in densely packed urban slums.

India’s coronavirus case tally surged to 6.23 million after it reported 80,472 new infections in the last 24 hours, data from the health ministry showed on Wednesday. 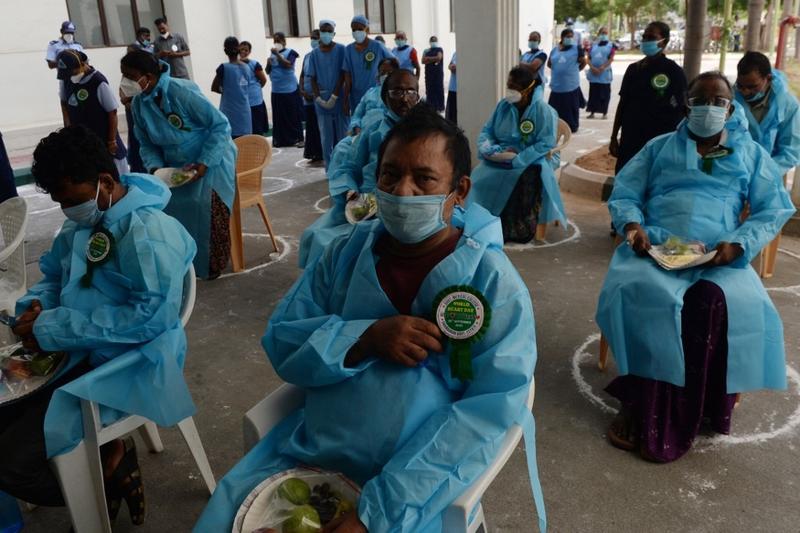 People with heart conditions, who recovered from COVID-19, prepare to go home during World Heart day celebrations at a govt hospital in Chennai on Sept 29, 2020. (ARUN SANKAR / AFP)

According to the ministry, 4,510 more people were discharged from hospitals, bringing the total number of recovered patients to 214,947.

Iran’s authorities are weighing a week-long shutdown of Tehran, the capital, and several other provinces severely affected by the outbreak.

The number of COVID-19 fatalities in Iran rose to 26,169 with 183 more deaths in the past 24 hours, Sima Sadat Lari, a spokeswoman for the health ministry, said in a statement on national TV.

The ministry reported in a statement 59 new deaths from the infectious disease, taking the death toll to 9,181. Meanwhile, 3,385 more patients recovered from the disease, bringing the total number of recoveries to 292,197.

A total of 2,266,355 tests have been carried out across the country since the outbreak of the disease in February, with 22,274 done on during the day, according to the statement.

Israel’s parliament approved a government-backed edict on Wednesday likely to stifle protests against Prime Minister Benjamin Netanyahu over alleged corruption and his handling of the coronavirus crisis.

The legislation, ratified after an all-night debate in the Knesset, bans Israelis from holding demonstrations more than 1 km (0.6 miles) from their homes, a measure the government said was aimed at curbing COVID-19 infections.

Critics of the new measure, which becomes part of Israel’s second national lockdown that went into effect on Sept 18, said it was really intended to block protests near Netanyahu’s official residence in Jerusalem.

Japan on Wednesday confirmed 563 new COVID-19 infections, bringing the nation's cumulative total to 83,689, not including cases related to a cruise ship quarantined in Yokohama near Tokyo earlier in the year.

The number of new daily cases compares to 518 cases reported the previous day and 279 confirmed on Monday.

Of the new cases, 194 were reported in Tokyo, the metropolitan government said, edging down from 212 confirmed a day earlier yet significantly higher than the 78 cases logged on Monday.

The capital city, the hardest hit by the virus among all of Japan's 47 prefectures, has seen its total tally rise to 25,738 infections, the metropolitan government's figures showed Wednesday.

The nationwide death toll from the virus currently stands at a total of 1,587 people.

The death toll climbed by six to 57, while the total number of recoveries rose by 137 to 4,496, the Jordanian Health Ministry said.

Kuwait on Wednesday reported 614 new COVID-19 cases and three more deaths, raising the tally of infections to 105,182 and the death toll to 610, the Health Ministry said in a statement.

Currently, 7,884 patients are receiving treatment, including 133 in ICU, according to the statement.

The ministry also announced the recovery of 639 more patients, raising the total recoveries in the country to 96,688.

On Sept 14, the Kuwaiti government decided to postpone the fifth phase of a plan to return to normal until further notice.

During the fifth phase, theaters and cinemas will be allowed to reopen and all social events permitted to be held.

Health Ministry Director-General Noor Hisham Abdullah said in a press release that three of the new cases were imported ones and the other 86 were local transmissions.

Two more deaths from the COVID-19 pandemic were newly reported, bringing the country's total deaths to 136.

Another 28 patients have been released after recovery, bringing the total number of the cured and discharged to 9,967, or 88.8 percent of all cases.

Of the remaining 1,121 active cases, 16 are being held in intensive care and three of them are in need of assisted breathing.

Myanmar reported 946 new infection cases and 26 more deaths of COVID-19 on Wednesday, said a daily release from the Health and Sports Ministry.

So far, the number of infection cases has reached 13,373 and 310 deaths were recorded, the release said.

Myanmar confirmed its two positive cases of COVID-19 on March 23 this year and 296,041 samples were tested for the disease as of Wednesday.

Nepal will resume providing tourist visas to foreigners after a gap of nearly seven months as the Nepali government decided to welcome foreign tourists starting from Oct. 17 for mountaineering and trekking purpose, Nepal's Ministry of Culture, Tourism and Civil Aviation said.

The Nepali government had suspended issuing tourist visas in early March to prevent the spread of COVID-19. 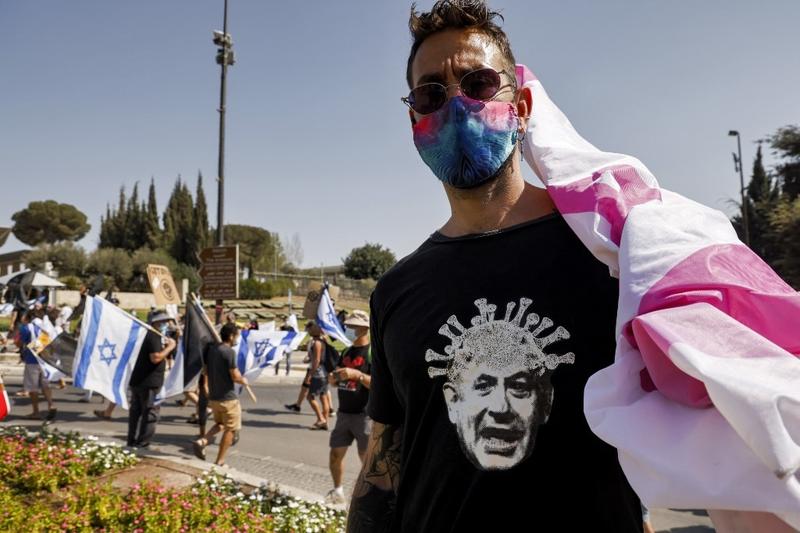 A man, mask-clad due to COVID-19, stands with a pink Israeli flag during a protest outside the Israeli parliament in Jerusalem on Sept 29, 2020. (MENAHEM KAHANA / AFP)

New Zealand reported one new case of COVID-19 in managed isolation on Wednesday, with no new cases in the community.

The person who has tested positive around day 3 of their time in managed isolation arrived from France via Singapore on Sept 25. They have been transferred to the Auckland quarantine facility, according to the Ministry of Health.

Oman's Health Ministry announced 528 new COVID-19 infections, raising the total confirmed cases in the country to 98,585, including 935 deaths and 88,528 recoveries.

Palestine reported 420 new coronavirus cases in the Palestinian territories, raising the total number to 50,115., while the death toll climbed to 360 after seven new deaths were added.

Meanwhile, 251 more recovered from the virus, bringing the overall recoveries to 122,699, while the fatalities remained 214 for the fifth consecutive day as no new deaths were reported, according to a ministry statement quoted by QNA.

The ministry reiterated the need to take preventive measures, including staying home and observing social distancing.

The Saudi Ministry of Health also reported 27 new death from the disease, taking the death toll to 4,739, while the total count of recoveries increased by 696 to 318,542.

According to the latest figures, till Wednesday noon, 3,374 COVID-19 positive cases had been reported.

According to the government information department, those who tested positive included one from Lebanon, one from the United Arab Emirates, seven from Oman, one from Qatar and one from Germany.

The country reported 113 more cases of COVID-19 as of midnight Tuesday local time compared to 24 hours ago, raising the total number of infections to 23,812.

The daily caseload rose above 100 in five days due to small cluster infections in Seoul and its surrounding Gyeonggi province linked to church services and a massive rally in central Seoul on Aug. 15.

The number of confirmed COVID-19 cases in the Philippines surged to 311,694 after the Philippines' Department of Health (DOH) reported 2,426 new cases on Wednesday.

The Philippines' capital Metro Manila topped the regions in the country with the highest number of 887 new cases on Wednesday.

The United Arab Emirates (UAE) on Tuesday announced 995 new COVID-19 cases, bringing the total confirmed cases in the country to 93,090.

The tally of recoveries increased by 1,076 to 82,538, while the death toll rose by three to 416, the UAE Ministry of Health and Prevention said.

In Turkey, 1,427 new COVID-19 infections were detected on Tuesday, raising the tally of confirmed cases in the country to 317,272.

The Turkish health ministry also reported 68 more deaths from the virus, taking the death toll to 8,130, while the total recoveries rose to 278,504.

Vietnam reported no new cases of COVID-19 infection on Wednesday, with its total confirmed cases standing at 1,094 with 35 deaths from the disease so far, according to its Ministry of Health.

Three patients have been given all-clear, raising the total cured cases in the country to 1,010 as of Wednesday, said the ministry.

Meanwhile, nearly 16,000 people are being quarantined and monitored in the country, the ministry said.

Vietnam has gone through 28 straight days without any COVID-19 cases in the community, according to the ministry.