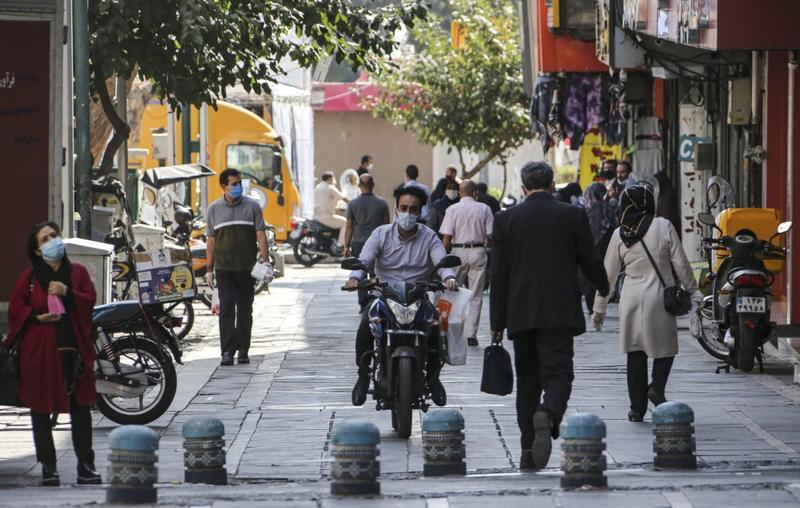 A man, mask-clad as a COVID-19 coronavirus pandemic precaution, rides a scooter past shops along a street in Iran's capital Tehran on Sept 27, 2020. (ATTA KENARE / AFP)

During a live broadcast on his Facebook page, Netanyahu said that the lockdown, originally planned to be imposed for no longer than three weeks, will take "at least a month, possibly for a much longer period."

Netanyahu has been under growing public anger over his failure to halt the outbreak and the ensuing economic crisis.

The country recorded 2,239 new COVID-19 cases, taking the tally of coronavirus infections to 233,265. The total number of related deaths increased to 1,507.

Sima Sadat Lari said 207 people had died in the past 24 hours and the total number of infection cases reached 453,637.

Coronavirus has surged in almost all of Iran’s 31 provinces, but President Hassan Rouhani said last week that his government had no plans to impose a complete lockdown despite the growing number of cases.

However, Iranian authorities said some restrictive measures would be reimposed in Tehran and some other cities classified as “red”, the highest category in Iran’s coronavirus risk scale.

Iran, which has the highest coronavirus death toll in the Middle East, eased restrictions on normal life in April in order to help its economy, already battered by US sanctions. Health officials have repeatedly warned that easing restrictions could lead to a rose in infections.

Australian defense personnel are being deployed to Port Hedland, one of the world's largest iron ore loading ports, to help contain an outbreak on a bulk carrier that last changed crews in the major seafaring city of Manila.

Seventeen of the 21-crew members of the carrier have tested positive for the virus, ship owner Oldendorff Carriers said in a statement. Ten of the infected crew have been moved to hotel quarantine while seven infected workers remain on board as part of an 11-person crew, authorities said.

Seventeen of the 21-crew members of the carrier have tested positive for the virus, ship owner Oldendorff Carriers said in a statement.

"All crew members tested negative for the virus before leaving the Philippines," Oldendorff said.

Victoria, Australia's coronavirus hotspot, reported 10 new infections in the past 24 hours. The state accounts for the bulk of the country's caseload of more than 27,000 infections, and 882 deaths.

Progress made in Victoria has encouraged Western Australia to soften its travel restrictions with the hotspot state, Premier McGowan said. From Oct 5, those arriving from Victoria will be able to quarantine at home rather than in a hotel. 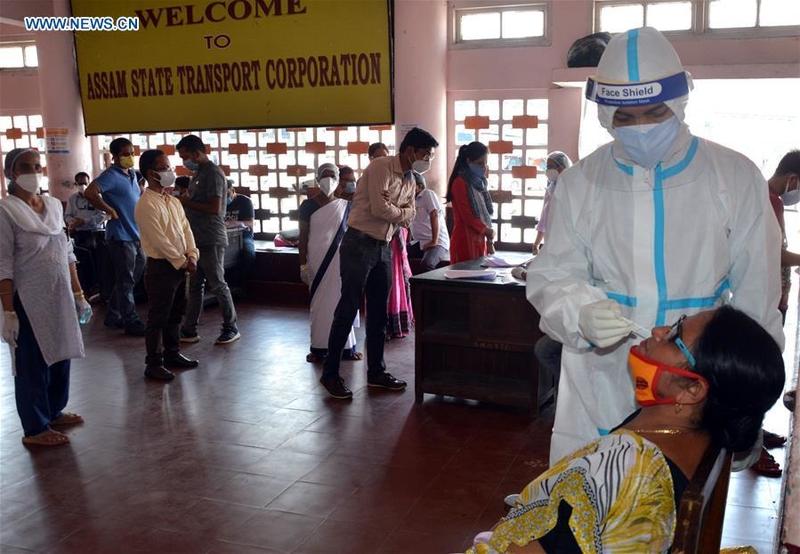 India reported its smallest daily rise in coronavirus deaths since Aug 3 of 776, data from the health ministry showed on Tuesday.

The South Asian country's coronavirus case tally rose to 6,145,291 after it reported 70,589 new infections in the last 24 hours, according to health ministry data, while total deaths stood at 96,318.

The results of India’s second nationwide serological survey, conducted between Aug 17 and Sept 22, showed that 1 in 15 people in the country had been exposed to COVID-19. The prevalence of infections nationwide rose to 6.6 percent from 0.73 percent in the first survey done in May, said Balram Bhargava, director general of the Indian Council of Medical Research. The highest rates were in densely packed urban slums.

India's federal health ministry has come up with a web portal to provide detailed information on the ongoing development of the COVID-19 vaccine.

The vaccine portal contains all information regarding India's efforts towards the development of a vaccine against the COVID-19. The aim of the portal, officials said, is to disseminate the vaccine-related information and create awareness among the masses.

Another 128 deaths were recorded, taking the death toll to 10,601 fatalities, one of the highest in Asia.

The death toll from the coronavirus in Iraq rose to 9,052 after 62 fatalities were added, while the total recoveries increased to 284,784 as 4,111 more patients recovered.

READ MORE: NZ PM: Travel to some Aussie states may be possible soon

Myanmar reported 897 newly confirmed COVID-19 cases on Monday, pushing the tally to 11,631, according to a release issued by the Ministry of Health and Sports.

Another 30 COVID-19 deaths were also reported, taking the death toll to 256 in total, according to the release.

State Counsellor Aung San Suu Kyi, in her capacity as the chair of the Central Committee on Prevention, Control and Treatment of COVID-19, said in a televised message to the public that a total of 200,000 antigen test kits from South Korea have arrived in the country and will be used for COVID-19 tests at district and township hospitals across the country starting Tuesday.

Meanwhile, the national-level Central Committee on Prevention, Control and Treatment for COVID-19 announced the further extension of preventive measures that are currently in place until Oct 31 to contain the spread of COVID-19.

New Zealand's total number of active cases stood at 55, including 29 imported cases detected in managed isolation facilities, and 26 community cases, the Ministry of Health said. Overall, the country has reported a total of 1,479 confirmed cases.

The ministry asked people to remain vigilant during school holidays to stop any spread of COVID-19.

"While many people will be enjoying a break over the next two weeks, it's also important to remember that the COVID-19 virus exploits any opportunity to spread," reads a statement issued by the ministry.

Oman's Ministry of Health announced 607 new cases of infections, raising the total number of coronavirus cases in the country to 98,057, including 924 deaths and 88,234 recoveries.

Palestine reported 503 new coronavirus cases, taking the tally of infections in the Palestinian territories to 49,695, including 39,386 recoveries and 353 deaths. 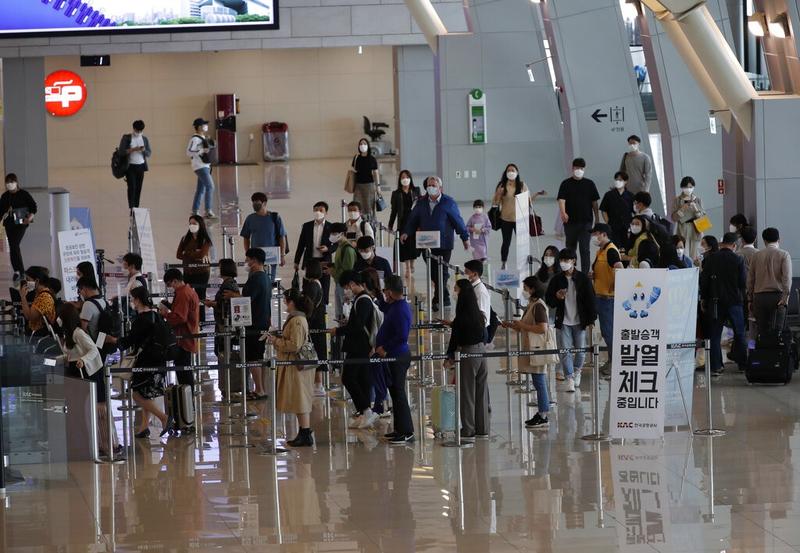 Passengers wearing face masks line up to board planes ahead of the upcoming Chuseok holiday, the Korean version of Thanksgiving Day, at the domestic flight terminal of Gimpo airport in Seoul, South Korea, Sept 29, 2020. (LEE JIN-MAN / AP)

South Korea appealed on Tuesday for strict social-distancing despite a slight fall in the number of its new coronavirus cases, with millions of people set to travel for a major holiday.

The Korea Disease Control and Prevention Agency (KDCA) reported 38 new infections by midnight Monday, for a fifth day of double-digit increases, taking the national tally to 23,699 cases, with 407 deaths.

The numbers came a day after the daily tally fell to its lowest since a new clusters of the novel coronavirus emerged from a church and a big political rally last month, which have resulted in more than 1,800 infections.

Health authorities pleaded for people to stay home and refrain from gatherings ahead of the Korean thanksgiving holiday of Chuseok, which begins on Wednesday, although millions are still expected to travel across the country. 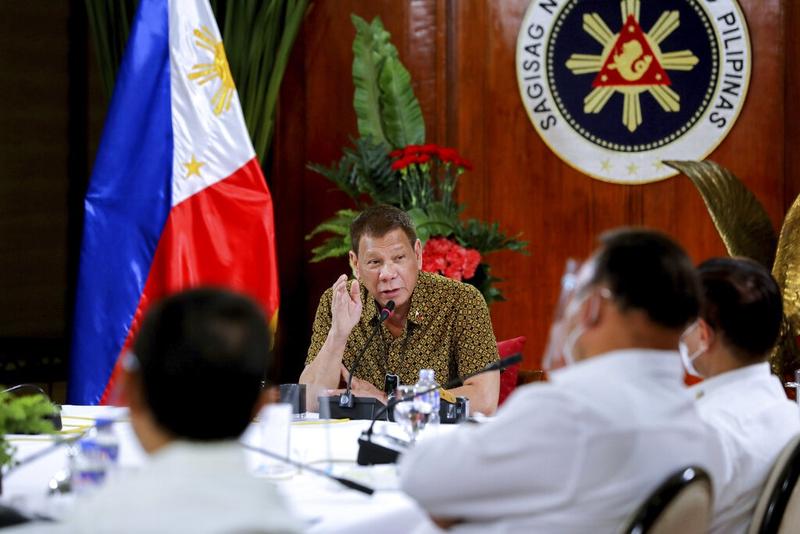 In this photo provided by the Malacanang Presidential Photographers Division, Philippine President Rodrigo Duterte, center, gestures as he meets members of the Inter-Agency Task Force on the Emerging Infectious Diseases at the Malacanang presidential palace in Manila, Philippines, on Sept 28, 2020. (ROBINSON NINAL JR. / MALACANANG PRESIDENTIAL PHOTOGRAPHERS DIVISION VIA AP)

Philippine President Rodrigo Duterte said on Monday partial coronavirus restrictions in and around the capital region will be extended for another month until Oct 31 to keep the spread of COVID-19 in check.

The Philippines' health ministry reported on Tuesday 2,025 new infections and 68 more deaths, taking the tally and the death toll to 309,303 and 5,448, respectively.

Meanwhile, the United Nations Population Fund said unintended pregnancies in the Philippines could spike by almost half to 2.6 million if movement restrictions due to the pandemic remain until year-end.

Saudi Arabia extended by three months a stimulus program to help businesses still struggling to recover from the effects of COVID-19 but rolled back its scope, in a first test of how the economy will respond as support measures introduced at the height of the pandemic wind down.

The initiative, which was due to expire in October, will now continue until January and will support half of all Saudis working in an organization still affected by coronavirus, sectors including travel, sports and entertainment, the General Organization for Social Insurance said in a statement Tuesday. The program originally covered 70 percent of Saudi employees in firms with over five workers, and applied to a wider swath of activities across the private sector.

Singapore's Ministry of Health (MOH) reported 15 new COVID-19 cases on Monday, bringing the total confirmed cases in the country to 57,715.

Of the new cases, six are imported cases, two are community cases and the rest are linked with the dormitories of foreign workers.

The Singapore government will spend S$2.2 billion (US$1.6 billion) over the next three years to improve a medical insurance plan for the country’s citizens and residents amid the economic impact of the coronavirus.

The funds will be used for premium subsidies for Medishield Life, a basic health insurance plan launched in 2015 to protect Singaporeans against large medical bills, the Ministry of Health said in a statement.

The tally of recoveries in the UAE rose to 81,462 after 918 more patients have recovered from the virus and the death toll reached 413 with one more death.

The death toll from the coronavirus in the country rose to 8,062 after 65 new fatalities were added in the past 24 hours, Koca said, adding that the total recoveries increased to 277,052.