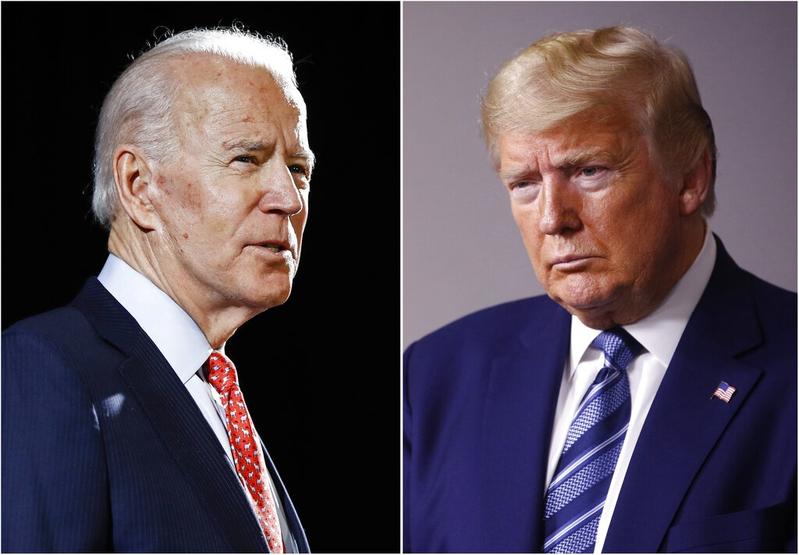 Donald Trump and Joe Biden kick off their first debate Tuesday with contentious topics like the Supreme Court and the coronavirus pandemic suddenly joined by yet another potentially explosive question -- whether the president ducked paying his taxes.

Trump got elected in 2016 after boasting about paying little income tax, but Washington -- and the candidates -- are focused on a New York Times report that Trump paid just US$750 in federal income taxes in 2016 and 2017.

For Biden, the report that Trump minimized his tax bill allows him to draw a distinction, in his words, “between Scranton and Park Avenue” — his symbols for abundant wealth and the working-class environment into which he was born in Pennsylvania.

The Commission on Presidential Debates declined to comment on whether moderator Chris Wallace of Fox News would change his lineup, which also includes racial justice, urban protests and election integrity among other issues

For Trump, spokesman Hogan Gidley said, the campaign welcomes a discussion on taxes -- even if it’s about the candidate avoiding paying them -- so the Trump camp can highlight what it says is Biden’s plan to raise taxes once in office.

Even if Trump successfully turns the conversation to Biden’s tax plans, or winks at voters that he managed to avoid the taxes people hate to pay, a cavalier attitude may still rankle voters who are struggling to make ends meet amid staggering job losses and a virus that has kept many businesses closed.

The two nominees face off at 9 pm New York time at Case Western Reserve University in Cleveland. Trump’s tax returns are not one of the planned topics, and the Commission on Presidential Debates declined to comment on whether moderator Chris Wallace of Fox News would change his lineup, which also includes racial justice, urban protests and election integrity among other issues.

The issue also rates well below other voter concerns like the coronavirus, the economy, and the Supreme Court.

While there is no polling on how voters rate Trump’s tax returns as an issue in the campaign, an open-ended Gallup Poll last month showed respondents listing the government, the coronavirus, race relations, crime and unifying the country as their top five concerns.

Workers prepare the stage ahead of the first US presidential debate at Case Western Reserve University in Cleveland, Ohio. (MATTHEW HATCHER/BLOOMBERG)

Nevertheless, Biden can use it to drive home his theme that Trump has betrayed the White, non-college educated male voters who put the president over the top in 2016 in key Midwestern states.

“I think it contributes to this larger sense that we have from Donald Trump that he looks down on working people,” Biden deputy campaign manager Kate Bedingfield said on CNN Sunday.

Polls have consistently found that large majorities of Americans — about two-thirds — believe that Trump should release his tax returns and that he hasn’t been entirely honest with the IRS.

Biden himself has tried to remain singularly focused on the coronavirus pandemic, waving off questions even about the fight over Trump’s Supreme Court nominee as a distraction, all part of Democrats’ unified playbook to focus on health care to connect with voters.

A Reuters/Ipsos poll conducted in July, after the Supreme Court decisions, found that half of Americans believed Trump’s returns contained politically damaging information

But it’s unlikely he won’t take a swipe at Trump for the tax revelations, given that Biden has released more than two decades of tax returns and in 2017 -- the year Trump, a billionaire, paid US$750 -- Biden paid more than US$3.7 million in federal income tax.

The Trump campaign says it’s not worried. And it is unlikely to lose support over the news of his low tax bills, said Glen Bolger, a longtime Republican strategist. “We would all like to pay as little in taxes as possible. There’s a widespread perception that the rich pay as little taxes as they can and obviously real estate investment is rife with loopholes.”

But with Trump trailing in national polls — and lagging in four of the six most important swing states — the issue also means he’s unlikely to gain any voters.

“He needs to make gains and drive his message,” Bolger said. “This probably makes it harder for him to make gains. He’s reacting instead of calling the shots. The way the Biden campaign will probably look at it is anything that puts Trump on the defensive is time well spent.”

Trump’s tax returns were the subject of one of Hillary Clinton’s sharpest attacks in the first debate of 2016.

“So you’ve got to ask yourself, why won’t he release his tax returns?” she said. “Maybe he doesn’t want the American people, all of you watching tonight, to know that he’s paid nothing in federal taxes.”

“That makes me smart,” Trump interrupted -- quickly changing the subject back to the Clinton email controversy.

“If only they spent as much time looking for, maybe, I don’t know, Hunter Biden’s tax returns and the Biden crime family issues,” said Donald Trump Jr., referring to Trump’s allegations that Biden’s son traded off his father’s influence as vice president to get business deals countries including Ukraine.

Trump has refused to voluntarily release his tax returns, as every president since Gerald Ford has done, and has fought efforts by Congress and New York state prosecutors to subpoena them.

A Reuters/Ipsos poll conducted in July, after the Supreme Court decisions, also found that half of Americans believed Trump’s returns contained politically damaging information: 26 percent said it was because they contain “incriminating evidence against him;” 16 percent said Trump “does not pay taxes” and 10 percent said Trump is “trying to hide significant financial losses.”

Only 7 percent said they agreed with Trump’s explanation -- that he was withholding his tax returns only because they are under audit.