Moon hopes to resume talks with DPRK after shooting incident 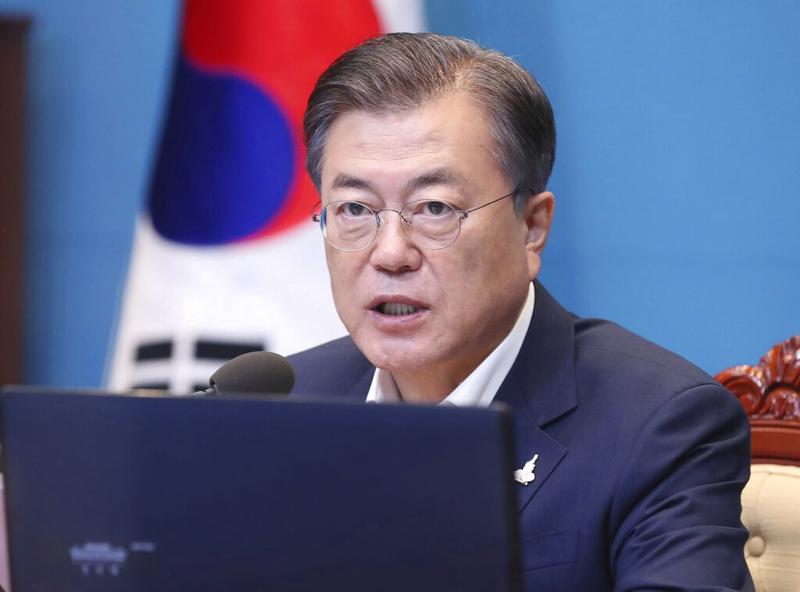 President of the Republic of Korea (ROK) Moon Jae-in speaks during a meeting with his senior secretaries at the presidential Blue House in Seoul, ROK, Sept 28, 2020. (LEE JIN-WOOK / YONHAP VIA AP)

SEOUL - The Republic of Korea's (ROK) President Moon Jae-in expressed hope Monday to restore dialogue with the Democratic People's Republic of Korea (DPRK) by resolving the shooting incident near the inter-Korean maritime border, according to the presidential Blue House.

"I hope that the tragedy would not end up as just an incident but create an opportunity for (inter-Korean) dialogue and cooperation, and for the progress in the South-North relations," Moon said in a weekly meeting with his senior Blue House aides.

The DPRK is also referred to as North Korea, and ROK as South Korea.

I hope that the tragedy would not end up as just an incident but create an opportunity for (inter-Korean) dialogue and cooperation, and for the progress in the South-North (ROK-DPRK) relations.

Resolving issues can be possible through dialogue, and substantive measures to prevent the recurrence can be taken through cooperation, Moon said.

A ROK fisheries official was shot dead by DPRK soldiers last week near the western inter-Korean sea border, according to ROK's military.

ROK expanded the search for the missing official on Monday, a day after DPRK accused ROK of raising tension by intruding into its territorial waters.

ROK's military has accused DPRK soldiers of killing the man, dousing his body in fuel and setting it on fire near the sea border, apparently in an effort to prevent the risk of a novel coronanvirus outbreak.

Officials in Seoul are calling on DPRK to agree to a joint investigation into the incident, which prompted an apology from DPRK leader Kim Jong-un, who said the killing should not have happened.

The DPRK sent a notice to the Blue House Friday to explain the deadly shooting, according to the presidential office.

Moon called Kim's apology "unprecedented, very rare and special" and a sign that DPRK did not want relations to worsen.

As of Monday, DPRK had not responded to the call for a joint investigation. On Sunday, its state media issued a statement complaining that ROK's naval operations had entered its territorial waters in the area, off the west coast of the peninsula, threatening to raise tensions.

"We have never crossed the Northern Limit Line to the North's side, but there has been differences in how the two Koreas mark the waters," ROK Coast Guard Lieutenant Lee Hong-chear said, referring to a disputed maritime demarcation that dates to the end of the 1950-1953 Korean War.

READ MORE: DPRK warns ROK against intrusion into its territory

At least six aircraft and 45 vessels were participating in the search, including 36 ships from the coast guard and navy, and nine boats from the fisheries ministry and private owners, Lee said.

DPRK said on Sunday it was conducting its own search for the man's body, and said it was considering ways to hand it over to ROK if found.