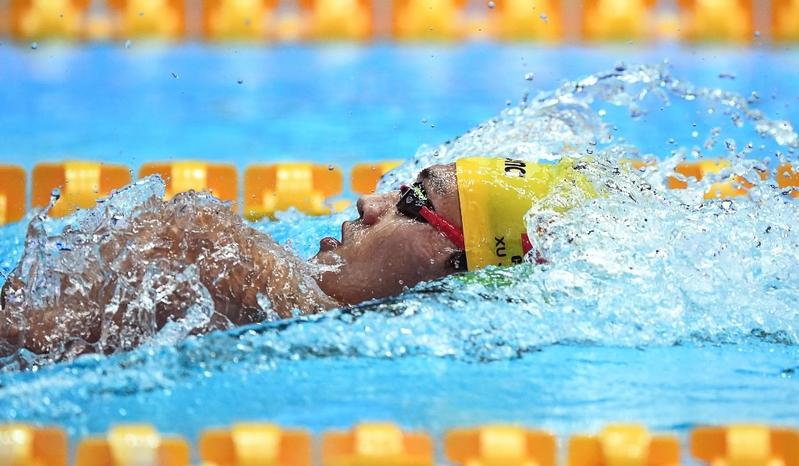 In this July 25, 2019 photo, China's Xu Jiayu competes in a heat for the men's 200m backstroke event during the swimming competition at the 2019 World Championships at Nambu University Municipal Aquatics Center in Gwangju, South Korea. (ED JONES / AFP)

QINGDAO, China - World champion Xu Jiayu from Zhejiang clinched gold in the men's 200m backstroke in one minute and 55.26 seconds at the 2020 Chinese National Swimming Championships here on Sunday.

Rookie Zheng Muyan, 18, defeated Olympic champion Ye Shiwen in the women's 200m breaststroke to take the title. However, Yu Jingyao was absent from that final, as she failed to make the top eight in a selection of physical tests held from September 22 to 23 - a new requirement to qualify for the championships.

Guangdong's Yu Hexin, who broke the national record in the men's 50m freestyle with a time of 21.79 seconds during the heats, was another one who failed to advance to the final due to the new rules on physical tests.

Olympic medalist Fu Yuanhui touched the finishing line first in the preliminary of the women's 100m backstroke, but was another to miss out on the final, ranking only 11th in the physical tests. Guangdong's Wang Xue'er took the crown in 59.55 seconds.

Ji Xinjie from Shandong secured the gold in the men's 400m freestyle in 3:48.87, with Hubei's Zhang Ziyang and Ji's teammate Hu Jia rounding out the top three.

Attracting around 300 of China's top swimmers, the 2020 Championships are being held from September 26 to October 2 in Qingdao.

The swimmers' performances at the championships will act as an important reference for their qualification for next year's Tokyo Olympic Games.