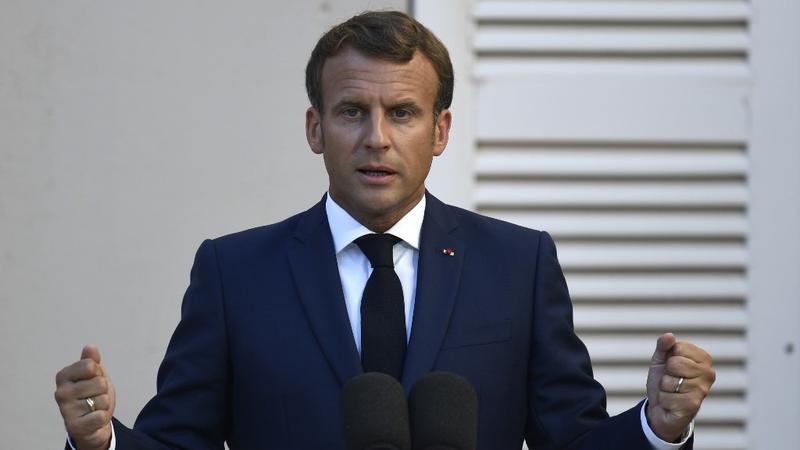 In this file photo, French president Emmanuel Macron speaks at the press conference after a meeting with German Chancellor Angela Merkel at Fort de Bregancon, in Bormes-les-Mimosas, south-east of France, on Aug 20, 2020. (PHOTO / AFP)

Belarus, a former Soviet republic closely allied with Russia, has been rocked by street protests since authorities said Lukashenko won an Aug 9 election by a landslide.

Belarus, a former Soviet republic closely allied with Russia, has been rocked by street protests since authorities said Lukashenko won an Aug 9 election by a landslide

More than 12,000 protesters have been arrested since the election that the opposition denounced as rigged.

“We are witnessing a power crisis in Belarus with an authoritarian administration that is not able to accept democracy logic,” Macron said. “...It is clear that Lukashenko must go.”

“We are seeing attempts to destabilize the situation in the country,” he told the United Nations General Assembly in a video statement. “Interference in our internal affairs, sanctions and other restrictions on Belarus will have the opposite effect, and are harmful for absolutely everyone.”

The United States, Britain and Canada are expected to impose sanctions soon on Belarusian individuals over what those governments view as a rigged election and violence against peaceful protesters, sources have told Reuters.

“Statements brimming with cynicism have been made by a series of our Western colleagues about their alleged concern for Belarusian sovereignty and well-being,” Makei told the United Nations. “In actual fact they are nothing other than attempts to bring chaos and anarchy to our country.”

The European Union said on Thursday Lukashenko was not the president of Belarus. Russia, Belarus’s closest ally, said the EU decision not to recognise Lukashenko amounted to indirect meddling in the country.