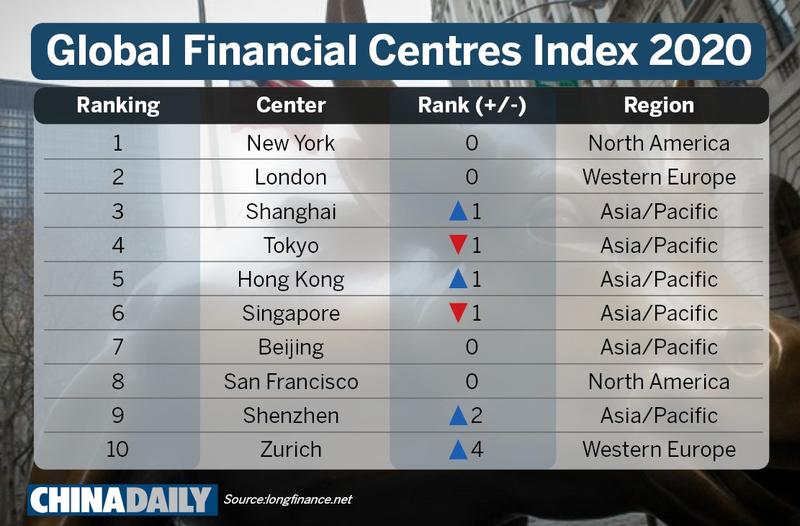 HONG KONG/SHENZHEN - Hong Kong has moved up a notch to fifth place in terms of comprehensive competitiveness among 111 financial centers in the world.

While New York and London maintained their respective top two rankings, Shanghai also advanced to the third spot, pushing Tokyo down to fourth place, according to the latest Global Financial Centers Index released on Friday.

Shenzhen’s too strengthened its financial competitiveness, climbing from 11th to 9th place in the rankings.

The coronavirus pandemic has severely dented the financial performance of major financial centers, said Liu Guohong, director of the Finance and Modern Industry Research Center at the China development Institute.

A Hong Kong government  spokesman said under the impact of the pandemic, various parts of the world were facing a varying degree of challenges. Yet, Hong Kong's financial system remains resilient

He said as the pandemic rages on, international financial professionals have lowered down their expectations of financial centers’ development.

Overall, global financial centers were down by 41 scores compared with the last report. More than 80 cities showed lower scores although those of the top 10 centers rose.

“This shows that market recognition of and confidence in the few leading financial centers are still high,” Liu said.

In a statement released on Friday afternoon, a spokesman for the Hong Kong government said the city's score rose when compared with that in March.

"As indicated in the report, the average rating of all financial centers dropped visibly during a time of continuing uncertainty around international trade, the impact of the COVID-19 pandemic and geopolitical environment. Meanwhile, Hong Kong's overall rating and ranking improved from those in March,” the spokesman said.

The spokesman said under the impact of the pandemic, various parts of the world were facing a varying degree of challenges. Yet, Hong Kong's financial system remains resilient.

Hong Kong will continue to capitalize on the unique advantages of its financial system under “one country, two systems”, the spokesman said.

“We will step up our efforts in promoting Hong Kong's role as a leading financial center in the world and the two-way gateway between the mainland and international markets. We will also leverage the enormous opportunities presented by the Guangdong-Hong Kong-Macao Greater Bay Area and the Belt and Road Initiative to develop the city into a broader and deeper fundraising platform, and further enhance Hong Kong's position as a center for asset and wealth management, offshore renminbi business, insurance and risk management as well as green and sustainable finance, and promote the development of financial technology," the spokesman added.

The Global Financial Centers Index, first launched in 2007, is published twice annually. The latest report is the 28th of its kind.