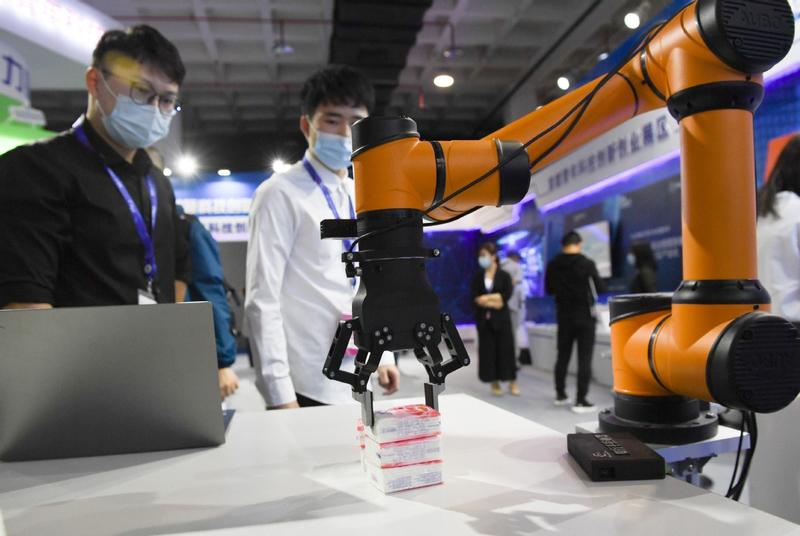 Visitors check out a smart robot during a high-tech exhibition in Beijing on Thursday. (PHOTO / XINHUA)

This assumes significance as leading countries are all competing for the digital trade "crown", they said.

"For countries nowadays, data is the crown of trade. Promoting the opening and flow of data is part of the capital's efforts to drive data for advanced productivity," said Tang Jianguo, vice-director of big data application and industries at the Beijing Bureau of Economy and Information Technology.

Beijing announced a slew of policies to develop the digital economy during the China International Fair for Trade in Services, known as CIFTIS, earlier this month.

Measures include the construction of an international big data exchange center and promotion of smooth trans-border data flows.

"With more data flows in the market, government departments and businesses are expected to gather more useful data for operations and business improvement. It is of great help for Beijing's industrial upgrading and higher-quality economic development," said Tang at a seminar held by the bureau and technology incubator 761C Space.

Beijing announced a slew of policies to develop the digital economy during the China International Fair for Trade in Services, known as CIFTIS, earlier this month

He said Beijing has already opened a big data platform with data on public services, finance, artificial intelligence, culture and internet industries available for transactions. These data were processed in the form of data sets after duly deleting personal information.

"These data have already played an important role in facilitating public convenience and in combating the COVID-19 outbreak. During the CIFTIS this year, more than 17 million yuan (US$2.5 million) of data transactions were done."

Beijing Financial Holdings Group, the operator of the finance data in Beijing's big data platform, leveraged data, including provident fund and taxes from the platform, to help a local bank to launch a total credit line of 2 billion yuan for nearly 1,000 small and micro-sized enterprises in Beijing.

"It fully demonstrated the significance of big data for the development of inclusive finance system, which, to a certain extent, greatly alleviated financing difficulties of small and micro-sized enterprises," said the company.

A latest McKinsey Global Institute report found large gaps between a handful of leading countries and the rest of the world.

The report ranks 139 countries on inflows and outflows of goods, services, finance, people and data. Singapore tops the rankings, followed by the Netherlands, the United States and Germany.

"In this increasingly digital era of globalization, countries led by the US are scrambling to seize this high ground of digital trade," said Liu Yingkui, head of international trade at the Academy of China Council for the Promotion of International Trade.

Liu said China has accumulated a huge amount of data and data streams in a group of areas, including trans-border e-commerce and superfast 5G development. These are valuable foundations for the development of the digital economy.

"China is expected to leverage data to build an industrial internet platform as soon as possible for the next step. The past years have witnessed a rising number of enterprises considering digital transformation. This trend has accelerated after the epidemic," he said.

"With more companies joining in, the platform can leverage data and artificial intelligence to optimize industrial software to fill in the gap of industrial development with developed countries in the world."