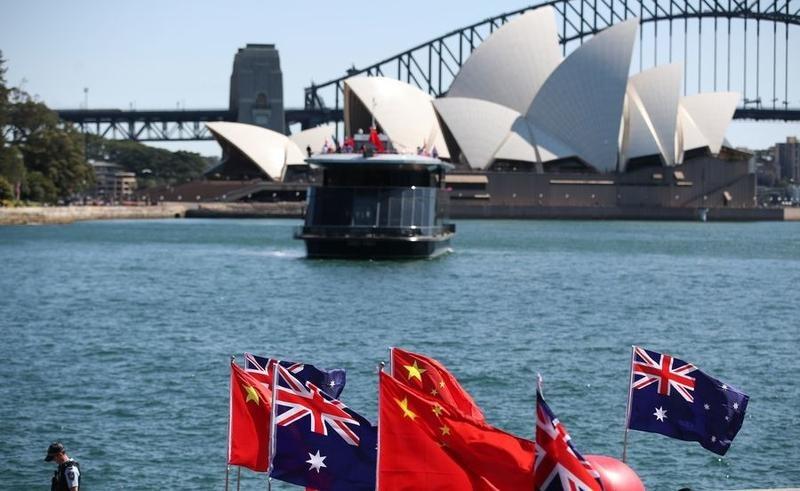 Photo taken on Sept 8, 2019 shows the Chinese and Australian national flags on a celebration event in Sydney, Australia. (PHOTO / XINHUA)

Australia has put foreign journalists on notice. Anything they write or broadcast will be monitored by the country’s security services to curb reportage deemed “slanted”. In other words, any coverage perceived overly critical of Australia.

The warning came from Home Affairs Minister Peter Dutton during a television interview with the Australian Broadcasting Corp (ABC) on Sept 13.

Although Dutton referred to “foreign” journalists, it was clear to observers he was referring to Chinese media personnel who have been caught in the “tit for tat” diplomacy between Beijing and Canberra.

“If people are here as journalists, and they’re reporting fairly on the news, then that’s fine. But if they’re here providing a slanted view to a particular community, then we have concern with that,” Dutton said.

Now, the question is: who decides if a story or a commentary is unfair or slanted? Will it be the security services, or Dutton — or both?

When the Australian Federal Police (AFP) raided the homes of four Chinese journalists on June 26 it was justified on the grounds of “foreign interference in the domestic politics of Australia”.

Though so far no one has been charged with any foreign interference crime against Australia, journalists working for Chinese media are, understandably, very worried.

One media person, who did not want to be named, said “I find it deeply offensive when commentators here refer to Chinese journalists as spies … it is insulting.”

He said the irony is that many young Chinese journalists have been trained at some of the best journalism schools in the United States, Australia, and Britain.

“Many of those fuelling the campaign of fear (in Australia) do so from a position of ignorance.

“You don’t have to go too far back in history to see how people like this can change public opinion against a race of people. Many Chinese here, even those who have been here for generations are starting to feel unwelcomed in the country they call home.”

He said the current environment is reminiscent of the Joseph McCarthy anti-communist witch-hunts in the US in the 1950s.

Canberra resident Sam Wong, a retired public servant, told ABC radio recently that he fears he could be “unfairly accused of being” an agent of the Chinese authorities as he is involved in Chinese and multicultural groups.

Wong, who has lived in Australia for 50 years, said the last two years have been the worst he has ever seen in China-Australia relations.

“They blame China every time for the deterioration of the relationship, when in fact it seems to me to be more Australia's fault and China is reacting defensively,” he told China Daily.

He noted that from a broader perspective, one can say that the US administration is systematically undermining good relations with China and leading allied nations against the Communist Party of China.

“Just last week we are told two Australian journalists were sent out of China, when in fact they left voluntarily.”

While Australians have been told they risk arrest if they travel to China, the people have since come to know that Australian intelligence personnel had invaded the homes of Chinese journalists in late June.

“We had to wait for a Chinese newspaper to reveal it. Then we are told two Chinese scholars have had their visas revoked on national security grounds. It is Australia that is threatening China, not the other way around.”

One academic, who wants to be anonymous, said relations have deteriorated to such an extent that Chinese journalists are worried they could be “thrown out for political interference” if they write something vaguely critical of Australia

One academic, who wants to be anonymous, said relations have deteriorated to such an extent that Chinese journalists are worried they could be “thrown out for political interference” if they write something vaguely critical of Australia.

David Brophy, senior lecturer in modern Chinese history at the University of Sydney, wrote in a blog on Sept 14 on the Australian National University’s China Story website: “Far from upholding liberal values, heightened sensitivity towards ‘foreign interference’ is putting those values at risk.

“If politicians don’t change course, the deterioration of Australia’s relationship with China will go hand in hand with the erosion of our civil liberties.”

He noted that, since 2017, the Australian Security Intelligence Organisation has been reciting the mantra that Australia faces “unprecedented levels of foreign interference, without ever having satisfactorily justified this claim”.

A Chinese foreign ministry spokesman said this week that Australia had “arbitrarily” searched Chinese media journalists stationed in Australia without “providing any evidence to justify their doing so”.

He said the actions had “severely disrupted the normal reporting activities of the Chinese media in Australia, grossly violated the legitimate and lawful rights and interests of these journalists, and fully exposed the hypocrisy of those people in Australia who have the audacity to assert that they are for ‘press freedom’ and ‘respect and protection of human rights’“.

Griffith University’s Mackerras noted that the two Chinese academics who suffered visa problems recently were excellent scholars, with a good track record in mentoring students who could set the stage for conducting useful research and improving bilateral relations.

Revoking their visas on security grounds is “preposterous”, he said.