Aoun warns Lebanon going 'to hell' with no govt formed 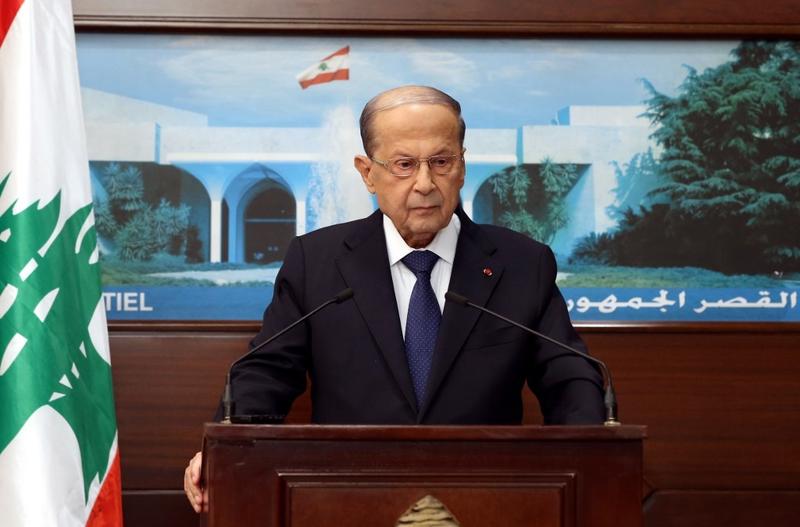 A handout picture provided by the Lebanese photo agency Dalati and Nohra on September 21, 2020, shows President Michel Aoun talking to the press at the presidential palace in Baabda, east of the capital, regarding ongoing consultations to form a new cabinet. Lebanon's prime minister-designate Mustapha Adib urged competing political forces to step up and help him form a desperately needed independent government to save the crisis-hit country. (DALATI AND NOHRA / AFP)

BEIRUT - President Michel Aoun warned on Monday Lebanon was going “to hell” if a new government could not be formed but agreeing one might take a miracle after positions had hardened between rival factions.

His comments in a televised address underlined the severe difficulties facing French efforts to lift Lebanon out of economic and financial crisis by getting its fractious politicians to form a new government and carry out reforms.

The crisis, exacerbated by the devastating Aug 4 Beirut port explosion, marks the worst threat to Lebanon’s stability since the 1975-90 civil war. A deadline agreed with Paris for forming the government passed last week.

The crisis, exacerbated by the devastating Aug 4 Beirut port explosion, marks the worst threat to Lebanon’s stability since the 1975-90 civil war. A deadline agreed with Paris for forming the government passed last week

The process has hit a logjam over the demand of Lebanon’s two dominant Shi’ite parties, the Iran-backed Hezbollah and its ally the Amal Movement, to name Shi’ite ministers in cabinet including the finance minister.

Aoun, a Hezbollah ally, said he had proposed compromise solutions that had not been accepted and depicted the problem as a standoff between the Shi’ite parties on the one hand and the Sunni Prime Minister-designate Mustapha Adib along with former prime ministers who support him on the other.

Asked by a reporter after his speech where Lebanon was headed if there was no agreement on the issue, Aoun, a Maronite Christian, said “of course, to hell”. Asked by reporters if his comments meant there was no hope of agreeing a government, Aoun said: “No, there might be a miracle”.

“We are today facing a government formation crisis which should not have happened because the events that await Lebanon do not allow a minute to be wasted,” Aoun said in his speech.

Aoun appeared to direct criticism at both the Shi’ite parties and Adib, whom he said did not want to consult the parliamentary blocs.

He said on the one hand parliamentary blocs could not be excluded from the government formation process while on the other it was not permissible for one party to impose ministers.

“With the hardening of positions there does not appear to be any solution on the horizon because all the proposed solutions amount to a ‘victor and a vanquished’,” he said.