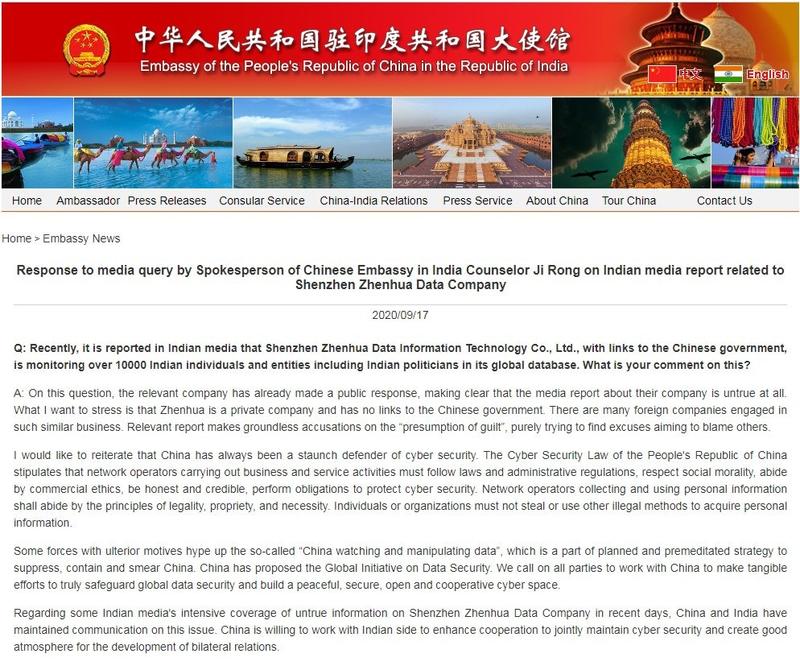 The Chinese Embassy in India posts an article on Spet 17,2020, saying that local media report about Shenzhen Zhenhua Data monitoring over 10,000 Indian individuals and entities is groundless.

"Relevant report makes groundless accusations on the 'presumption of guilt', purely trying to find excuses aiming to blame others," Ji Rong, counselor and spokesperson of the embassy, said in response to untrue report on the tech company.

The spokesperson noted that on this question, the relevant company has already made a public response, making clear that the media report about their company is untrue at all

Local media has reported that Shenzhen Zhenhua Data, with links to the Chinese government, is monitoring over 10,000 Indian individuals and entities including Indian politicians in its global database.

The spokesperson noted that on this question, the relevant company has already made a public response, making clear that the media report about their company is untrue at all.

"What I want to stress is that Zhenhua is a private company and has no links to the Chinese government," Ji said. "There are many foreign companies engaged in such similar business."

"Some forces with ulterior motives hype up the so-called 'China watching and manipulating data', which is a part of planned and premeditated strategy to suppress, contain and smear China," she said.

Noting that China has proposed the Global Initiative on Data Security, the spokesperson called on all parties to work with China to make tangible efforts to truly safeguard global data security and build a peaceful, secure, open and cooperative cyber space.

Regarding some Indian media's intensive coverage of untrue information on Shenzhen Zhenhua Data in recent days, Ji said China and India have maintained communication on this issue.

"China is willing to work with Indian side to enhance cooperation to jointly maintain cyber security and create good atmosphere for the development of bilateral relations," she said.