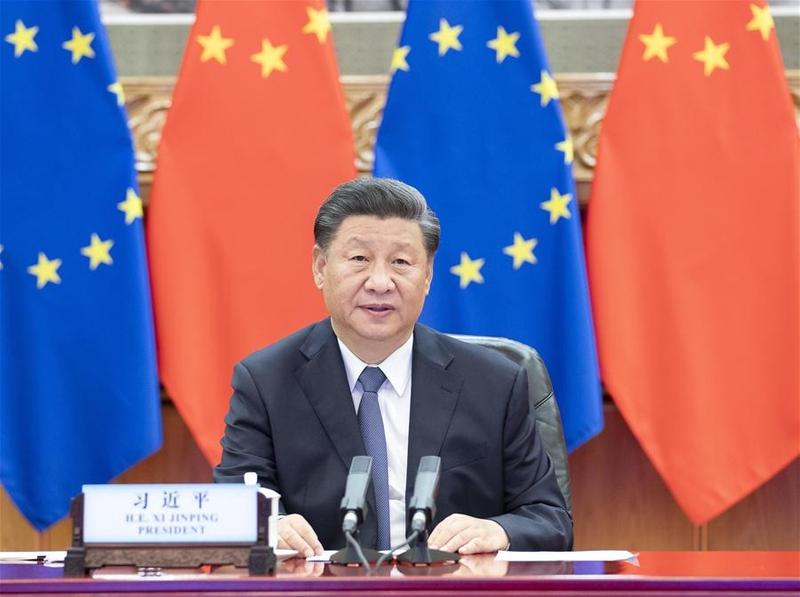 China and the European Union reaffirmed their goal of concluding talks on the bilateral investment agreement before year's end and agreed to bolster cooperation on green development and the digital sector during a leaders' meeting on Monday.

The two sides agreed to accelerate talks on the investment agreement. Negotiating teams have had 31 rounds of talks on the agreement since negotiations were launched in 2014.

China and the EU will establish a high-level dialogue on the environment and climate and work together in the digital sector to build green and digital cooperative partnerships, according to a decision adopted at a leaders' meeting

China and the EU will establish a high-level dialogue on the environment and climate and work together in the digital sector to build green and digital cooperative partnerships, according to a decision at the meeting.

In his remarks at the meeting, Xi underlined the need for the two sides to unwaveringly pursue the healthy and steady growth of the China-EU comprehensive strategic partnership while adhering to the principles of peaceful coexistence, openness and cooperation, multilateralism as well as dialogue and consultation.

The COVID-19 pandemic has accelerated the profound changes unseen in a century, and mankind is standing at a new crossroads, he said.

China and the EU, as important trading and investment partners, should enhance the coordination of macro policies and come up with more measures to unleash more cooperative opportunities, Xi said.

With China proposing a global data security initiative, Xi said it is his hope that the EU will work with China to promote the creation of standards and rules on the governance of the global digital economy.

He said China has been closely following the recent moves made by the EU in the areas of 5G, examination of foreign investment, government procurement and competition policies, and he hopes the EU will maintain the openness of its trade and investment markets and create an open, fair and nondiscriminatory business environment to ensure the legitimate interests of Chinese firms.

Xi underlined the importance of enhanced bilateral cooperation on the research and development of COVID-19 vaccines and making them global public goods that are beneficial and available for all, especially people in developing countries.

He also stressed that the issues involving the Hong Kong Special Administrative Region and the Xinjiang Uygur autonomous region are in essence matters regarding the defense of China's national sovereignty, security and unity and the protection of rights for the people to live safe and happy lives.

Beijing will resolutely oppose any individual or forces trying to instigate instability, division or chaos in the country, and firmly object to the intervention in China's internal affairs by any country, he added. As for human rights, China will not accept lectures from other countries and will object to the practice of double standards, he said.

The leaders also announced the signing of a bilateral agreement on geographical indications on food products. The agreement was hailed by the council of the EU as "the first significant bilateral trade agreement signed between the EU and China".

It will ensure that 100 EU agrifood geographical indications such as Mozzarella di Bufala Campana cheese or Elia Kalamatas olives get protection on the Chinese market. Likewise, 100 Chinese products will be protected in the EU, thereby ensuring mutual recognition of agricultural traditions, the council said in a statement in July.