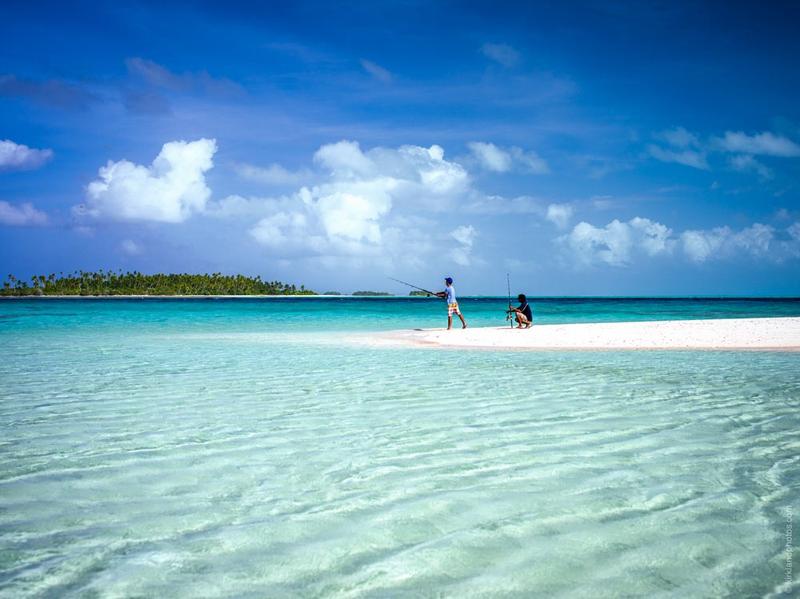 Local people try fishing in Kiribati, a Pacific island nation which lies low above the sea and is threatened by climate change effects which will cause the sea level to rise further. （PHOTO  PROVIDED TO CHINA DAILY）

Climate change has not stopped for COVID-19.

Greenhouse gas concentrations in the atmosphere are at record levels and continue to increase. Emissions are heading in the direction of pre-pandemic levels following a temporary decline caused by lockdowns and the economic slowdown.

Along the West Coast of the United States, wildfires have decimated millions of hectares of land, destroyed entire towns and left thousands homeless in the worst fires in living memory

The world is set to see its warmest five years on record and is not on track to meet agreed targets to keep the global temperature increase well below 2 C or at 1.5 C above pre-industrial levels.

These are just some of the findings in this year's United in Science 2020 report by the World Meteorological Organization (WMO), which has just been released. The report presents the latest data and findings related to climate change.

This year alone has seen unprecedented fires and flooding, due largely to climate change.

In June, the Yangtze basin and its tributaries saw some of the worst floods in more than 20 years.

Along the West Coast of the United States, wildfires have decimated millions of hectares of land, destroyed entire towns and left thousands homeless in the worst fires in living memory. It was a similar story in many parts of Australia earlier this year.

Wildfires that incinerated tundra along the Arctic Circle this summer have released a record 244 metric megatons of carbon dioxide (CO2) – 35 percent more than last year, which was also a record breaker, according to the scientific magazine Nature on Sept 11.

The COVID-19 pandemic has disrupted lives worldwide. At the same time, the heating of our planet and climate disruption has continued apace

United Nations Secretary-General Antonio Guterres, in a foreword to United in Science 2020, said: “This has been an unprecedented year for people and planet. The COVID-19 pandemic has disrupted lives worldwide. At the same time, the heating of our planet and climate disruption has continued apace.

“Never before has it been so clear that we need long-term, inclusive, clean transitions to tackle the climate crisis and achieve sustainable development. We must turn the recovery from the pandemic into a real opportunity to build a better future,” Guterres said.

The United in Science 2020 report, the second in a series, is coordinated by the WMO, with input from the Global Carbon Project, the Intergovernmental Panel on Climate Change, the Intergovernmental Oceanographic Commission of UNESCO, the UN Environment Programme, and the Met Office, the United Kingdom’s national weather service.

“Meanwhile, large swathes of Siberia have seen a prolonged and remarkable heat wave during the first half of 2020, which would have been very unlikely without anthropogenic climate change. And now 2016-2020 is set to be the warmest five-year period on record.

“This report shows that while many aspects of our lives have been disrupted in 2020, climate change has continued unabated.”

Physician, cardiologist and a Human Futures Fellow at the Australian National University in Canberra, Dr Arnagretta Hunter, said the report gives a “remarkable perspective on the growing challenge of our warming world”.

“Climate change remains a central health challenge for the 21st century,” she told China Daily. “This report should inspire leaders around the world toward rapid decarbonization. Time is of the essence. It is past time for all policymakers to take this seriously.”

Professor Tom Wigley, a climate change expert at the University of Adelaide, said “there are no surprises in this report … the planet is still heading rapidly toward surpassing the warming targets prescribed in the Paris Agreement” on climate change.

“Sadly, for the nuclear issue at least, this reflects both institutional bias and personal biases in some of the report’s authors,” Wigley told China Daily.

Pep Canadell, research scientist at the CSIRO, Australia’s national science agency, and executive director of the Global Carbon Project, said the report’s findings are yet “another reminder that while we are busy finding ways out of the COVID-19 crisis and still analyzing what went wrong in the last fire season, climate change continues to build the foundation of what will be the biggest ever global crisis if we don’t do more to mitigate it, and quickly”.

Thomas Mortlock, adjunct fellow in the Department of Environmental Sciences at Macquarie University in Sydney, said even if it were possible to eliminate all CO2 emissions tomorrow, the effects on global temperature would not be felt for decades to come because of inertia in the climate system.

“For this reason, we need to be considering climate change in investment decisions today, because it is ‘baked in’ for the coming decades at least,” he told China Daily.