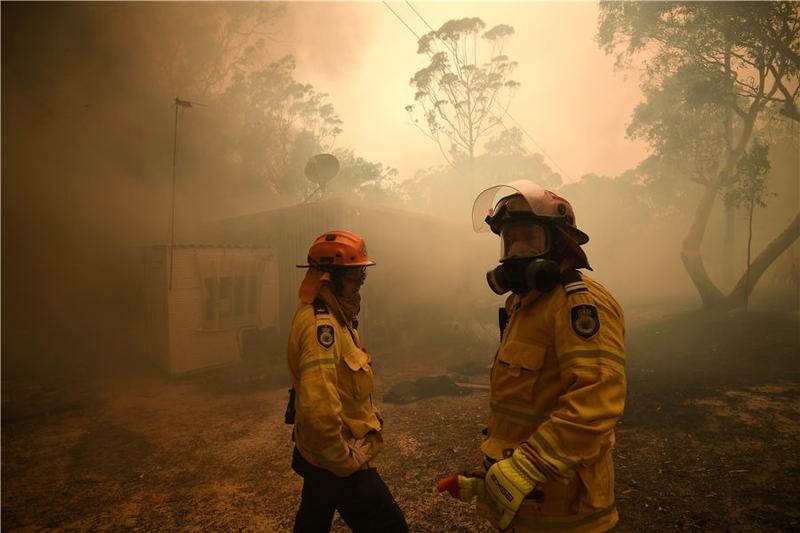 Deadly bush fires raging in Australia have left cities, towns and vast areas of the countryside shrouded in dense smoke and made headlines around the world.

The fatalities include a volunteer firefighter battling a blaze in New South Wales on Dec 30. In that state, more than 900 homes have been destroyed, a number that is expected to rise.

Late last month, images of a dehydrated koala approaching a cyclist－in temperatures of 40 C－begging for water in the middle of a road near Adelaide, South Australia, went viral.

According to ecologists from the University of Sydney, some 480 million mammals, birds and reptiles have been killed directly or indirectly by the bush fires

In New South Wales, it is estimated that 8,000 koalas, or about one-third of the number in the state, have died in the fires.

According to ecologists from the University of Sydney, some 480 million mammals, birds and reptiles have been killed directly or indirectly by the bush fires, according to the website Sydney News& Life.

A statement issued by 22 health and medical organizations declared the levels of air pollution caused by the fires a "public health emergency".

More emergency warnings were issued on Dec 30. Some 40,000 vacationers were urged to evacuate East Gippsland, a tourist resort in the state of Victoria in the southeastern part of the country. Many people who ignored the advice have been told it's too late now and that they should take shelter.

All six Australian states and the Northern Territory reported temperatures higher than 40 C on Dec 30. In New South Wales, there were close to 100 bushfires that day as lightning strikes in dry forests sparked new blazes.

Scientists have long warned that a hotter and drier climate would increase the incidence and intensity of bushfires in Australia.

A survey conducted in late November by polling company UComms found that more than half of the 1,500 Australians surveyed agreed that climate change had worsened the threat of bushfires, which are just one of the growing number of climate change-related disasters recorded globally in the past year.

Counting the Cost 2019: A Year of Climate Breakdown, a report released on Dec 27 by Christian Aid in London, listed the 15 most destructive weather events of the year, including droughts, floods, fires, typhoons and cyclones. Each disaster caused damage of more than US$1 billion, and four of them resulted in damage of over US$10 billion each.

The report said the figures are likely to have been underestimated, as often only insured losses are shown and no account taken of other financial costs, such as lost productivity and uninsured losses. 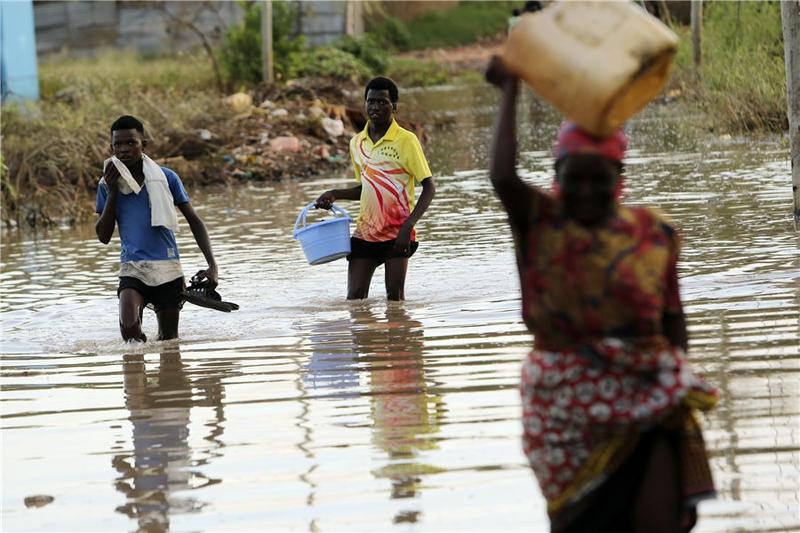 Floodwaters engulf a street in Pemba on the northeast coast of Mozambique in May.  (PHOTO / AGENCIES)

While the vast majority of deaths were caused by just two events in India and southern Africa, reflecting how the world's poorest people pay the heaviest price for the consequences of climate change, the financial cost of disasters was highest in richer countries, such as Japan and the United States.

While the vast majority of deaths were caused by just two events in India and southern Africa, reflecting how the world's poorest people pay the heaviest price for the consequences of climate change

The report said all the events were linked to climate change caused by humans. It stated that scientific studies have shown that climate change made a particular event "more likely or stronger", while in other cases, an event was the result of shifts in weather patterns, such as higher temperatures and reduced rainfall that made fires more likely, along with higher water temperatures that fueled tropical storms.

Michael Mann, director of the Earth System Science Center at Pennsylvania State University in the US, said: "If anything, 2019 saw even more profound extreme weather events around the world than the previous year. With each day now, we are seemingly reminded of the cost of climate inaction in the form of ever-threatening climate change-spiked weather extremes."

"Global warming continues," he said, adding that average global temperatures had risen by about 1.1 C since the preindustrial era and in the oceans by 0.5 C.

"We have started seeing hunger increase once again after a period of decline. Now, we have more than 800 million people suffering from a lack of food."

Records have been broken worldwide concerning emissions of the three main greenhouse gases: carbon dioxide; methane; and nitrous oxide. Carbon dioxide is regarded as the most significant challenge.

Taalas, who comes from Finland and started his second four-year term as head of the WMO on Wednesday, said: "We are heading toward a temperature increase of 3 to 5 degrees C by the end of the century. If we use all fossil fuel resources, we will move toward 8 C."

Some 85 percent of the world's energy still comes from fossil fuels and only 15 percent from renewable energy.

The United Nations Environmental Programme's 2019 Emissions Gap Report issued in late November also painted a bleak picture. It said the goals of the Paris agreement on climate change "will slip out of reach" unless the world begins to rapidly reduce greenhouse gas emissions. 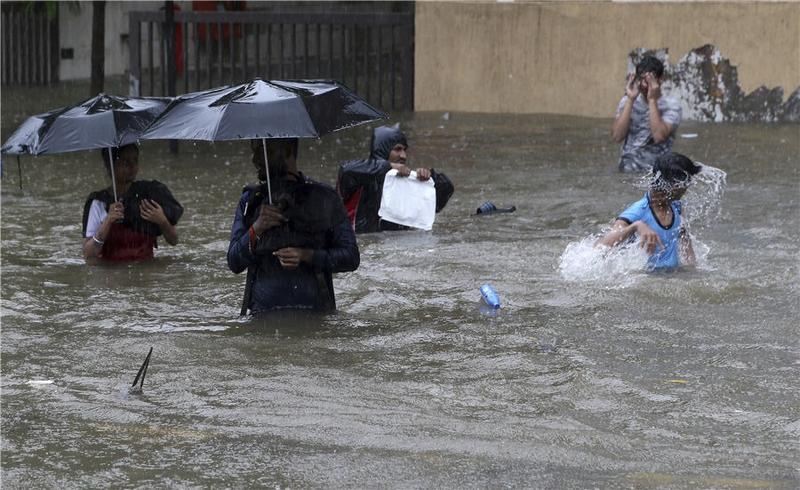 People make their way through a flooded street in Mumbai, India, in September.  (PHOTO / AGENCIES)

The goals of the agreement, set in 2015, are limiting global warming to "well below 2 C above preindustrial levels" and pursuing efforts to limit temperature rise to 1.5 C.

Global carbon dioxide emissions have risen by about 11 percent since the first UNEP emissions gap report in 2010. Growing global emissions mean that more and faster cuts will be needed to meet the Paris agreement goals. To achieve the 1.5 C target, nations must increase their commitments fivefold starting this year, according to the UNEP report.

Sivan Kartha, a senior scientist at the Stockholm Environment Institute, described a doomsday-type scenario in which temperatures will rise by 5 C if the world continues to release greenhouse gases and takes no action.

He said at COP25 that in the depths of the Ice Age, when sheets of ice kilometers thick covered large parts of the Earth's surface, where large cities and long coastlines are located today, the planet was only about 5 C colder than it is now.

No one knows what will happen if temperatures rise by another 5 C, he said, comparing the lack of action to "looking at an existential risk to humankind and deciding to take a gamble ... That's madness, and we can't let that happen."

In a report by the UN Intergovernmental Panel on Climate Change in October 2018, the world's leading climate scientists warned that there are only 12 years left for global warming to be kept to a maximum of 1.5 C. Even half a degree beyond that will significantly increase the risk of droughts, floods, heat waves and poverty for hundreds of millions of people.

COP25, which was extended for two days, was widely viewed as a failure. Nearly 200 nations attending did not agree on setting higher targets and working to settle the details of two outstanding rules of the Paris agreement: Article 6 on the international carbon market and Article 8 on the loss and damage that underdeveloped nations have endured due to the climate crisis and how they will be compensated.

The official withdrawal of the US, the world's largest historical carbon emitter, from the Paris agreement in November has dealt a heavy blow to the global momentum on fighting climate change. This is despite the fact that many US states, cities and businesses have said they will keep their promise to cut carbon emissions. 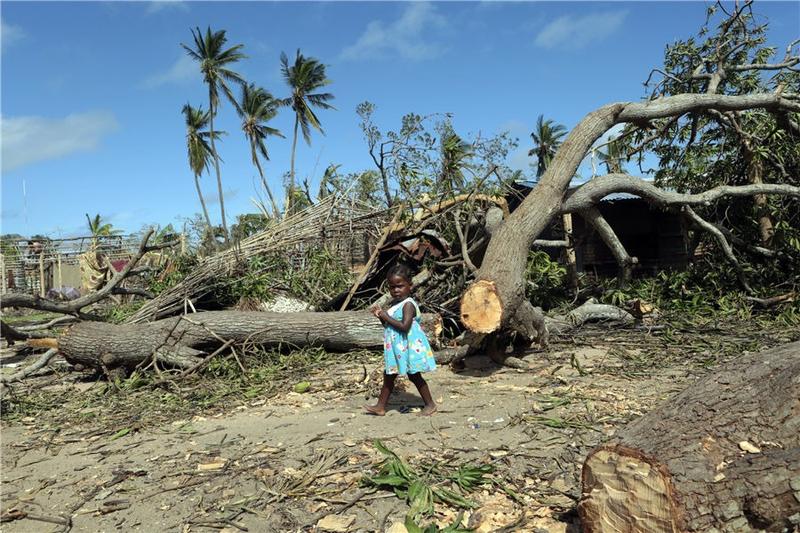 A girl passes trees uprooted by Cyclone Kenneth on Ibo island, Mozambique, in May. (PHOTO / AGENCIES)

Despite his disappointment at the outcome of COP25, Guterres said: "We must not give up, and I will not give up. I am more determined than ever to work for 2020 to be the year in which all countries commit to do what science tells us is necessary to reach carbon neutrality in 2050 and no more than a 1.5 C temperature rise," he said.

According to grassroots environmental advocacy group The Climate Mobilization, nearly 1,300 local governments and several national administrations have declared a climate emergency, covering a population of more than 800 million

According to grassroots environmental advocacy group The Climate Mobilization, nearly 1,300 local governments and several national administrations have declared a climate emergency, covering a population of more than 800 million.

In his message for the new year, delivered on Dec 29, Guterres said young people are the world's "great source" of hope.

He was referring in large part to the youth climate movement led by 17-year-old Swede Greta Thunberg, a key player at COP25. In August 2018, she began to skip school classes and protest outside the Swedish parliament, triggering the global Fridays for Future movement by students in more than 130 countries demanding action on climate change.

On Dec 11, during COP25, Thunberg was named Time magazine's Person of the Year.

The global movement Extinction Rebellion, founded in the United Kingdom in 2018, now covers some 70 countries worldwide.

It has resorted to civil disobedience to spread the climate change message. Action taken on Dec 14 during COP25 involved dumping horse manure in front of the conference venue.

Some observers see a ray of hope in the latest International Energy Agency report, which projects warming of 2.9 C to 3.4 C, compared with its prediction at the start of the 2010s of a catastrophic warming of 6 C by the end of century.

The growth of renewable energy has also far exceeded expectations. Prices of solar photovoltaic systems, which covert sunlight into electricity, have dropped by 81 percent since 2009. According to Kelly Levin, a senior associate at the World Resources Institute, by 2017, the majority of new power-generating capacity added worldwide came from renewable energy. But she warned, "We are not acting quickly enough."

Countries worldwide are expected to raise their goals at COP26 in Glasgow, Scotland, from Nov 9 to 19, just days after the US presidential election, with Democrat candidates pledging to rejoin the Paris agreement if they win.

Taalas, from the WMO, said the world has the means to solve the climate change problem through nuclear energy, hydropower and renewables.

"There is a sense of urgency. We need transformation within 10 to 30 years for our energy, transportation and industries," he said.