Turkey accuses US of fueling tensions with Pompeo visit 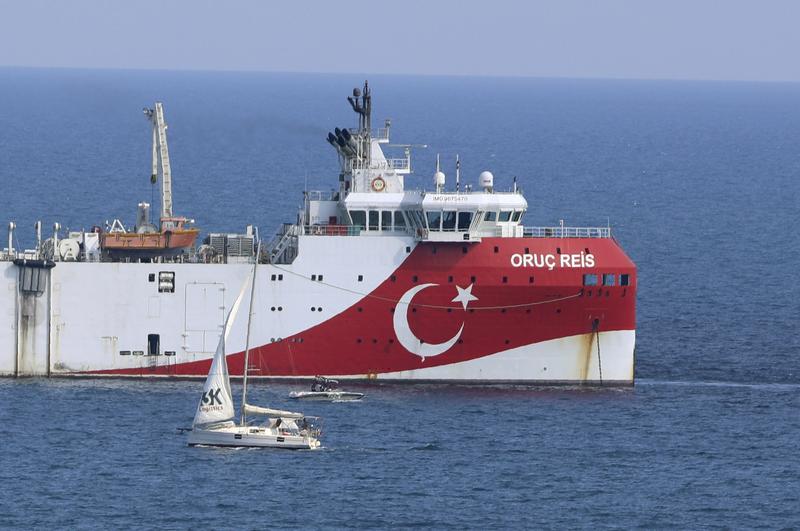 Turkey's research vessel, Oruc Reis anchored off the coast of Antalya on the Mediterranean, Turkey, Sept 13, 2020. Greece's Prime Minister Kyriakos Mitsotakis welcomed the return of a Turkish survey vessel to port Sunday from a disputed area of the eastern Mediterranean that has been at the heart of a summer stand-off between Greece and Turkey over energy rights. (BURHAN OZBILICI / AP)

ISTANBUL - Turkey accused the US of stoking tensions in the eastern Mediterranean by planning to establish a new military training center on Cyprus.

The plan, announced during US Secretary of State Michael Pompeo’s visit to Nicosia on Saturday, comes close on the heels of Washington’s decision to ease its longstanding arms embargo on the island. During his trip, Pompeo said he was “deeply concerned” about Turkey’s energy exploration in offshore areas over which European Union members Greece and Cyprus assert jurisdiction.

The increased US military support to the Cypriot government is agitating Turkey at a time when tensions in the area appeared to be easing.

The agreement to build the center “will not serve peace and stability in the eastern Mediterranean and will harm the process to solve the Cyprus problem,” Foreign Ministry spokesman Hami Aksoy said. Washington’s latest moves “tip the balance on the island and fuel tensions,” he added, criticizing Pompeo for not meeting with Turkish Cypriot leaders.

While the Cypriot government officially has sovereignty over the entire island, Cyprus has in effect been divided since Turkish forces captured its northern third in 1974, following a coup attempt in which a military junta in Athens sought to unite Cyprus with Greece. The Turkish minority’s self-proclaimed state in the north, recognized only by Ankara, also claims rights to any energy resources discovered off its coast.

Tensions in the area flared in August after Turkey resumed gas exploration and naval exercises in contested waters. Turkey and Greece have since deployed their navies to an area where they both assert exclusive economic rights, and France has started expanding its military presence there in response to Turkish actions.

Yet in recent days, there have been signs of de-escalation. Turkey’s recall of a survey ship from contested waters was followed by Greece’s expression of willingness to start a new round of talks with Ankara. Turkish Defense Minister Hulusi Akar also signaled readiness for dialogue, ahead of a late-September meeting where EU countries plan to discuss restrictive measures against Turkey.

The Athens Stock Exchange Index rose as much as 3 percent at on Monday, the most in more than two months, following the moves.

In a possible nod to Turkish nationalists, Turkish Foreign Minister Mevlut Cavusoglu said on Monday that the survey ship will sail again after maintenance and that Turkey is not stepping back. Cavusoglu also said Turkey does not expect the European Union to impose sanctions on it.

The EU says it fully supports member states Greece and Cyprus in the dispute and has said it is drawing up potential sanctions if dialogue does not begin. Cavusoglu repeated in the interview on NTV Turkey was open to talks without pre-conditions.

But a spokesman for President Recep Tayyip Erdogan urged Greece and the EU not to waste the opportunity.

“Turkey will resolutely protect its rights and interests, both in the field and at the table as a strong actor,” Ibrahim Kalin said on Twitter on Monday. “Greece and EU countries should not squander the chance given to diplomacy and must take reciprocal steps.”