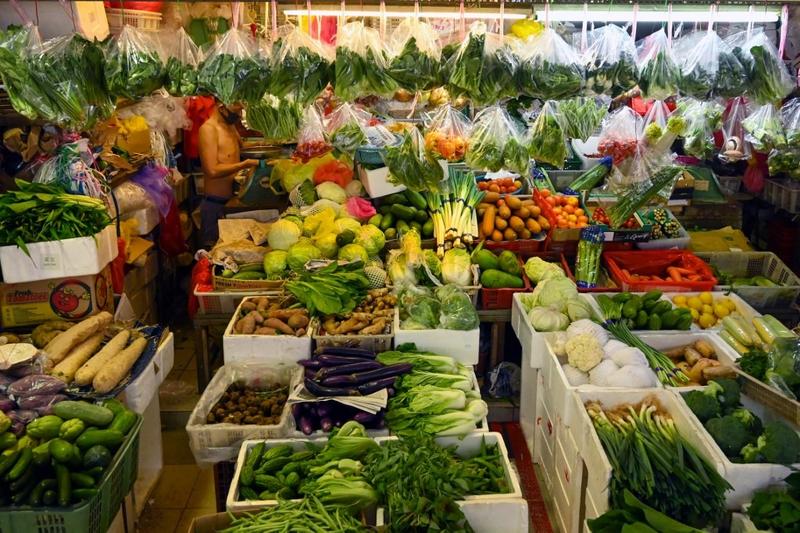 In this July 2, 2020 photo, a vegetable vendor tends to his stall in the Yio Chu Kang market in Singapore. (ROSLAN RAHMAN / AFP)

Indonesian engineer Eva Bachtiar was consulting for a farmers' group in 2016 when she learned of how much fresh produce in the country was thrown away because of a lack of infrastructure and post-harvest technology.

Malaysians dump over 16,000 tons of food each day – enough to feed 12 million people – according to the Solid Waste and Public Cleansing Management Corporation

“It's hard to believe that over 19 million poor Indonesians live in hunger while so much food ends up being wasted,” Bachtiar told China Daily. She cited the 2016 Economist Intelligence Unit report which revealed that Indonesia is one of the world’s biggest generators of food waste on a per capita basis.

Bachtiar, who is in her 30s, then partnered with two environmentalists to launch Garda Pangan (which means ‘Food Guardian’ in the Indonesian language). Based in the East Javanese city of Surabaya, the social enterprise collects edible surplus food from local restaurants, bakeries, and hotels and redistributes them to poor communities. Bachtiar said since Garda Pangan’s founding in 2017, the enterprise has collected 19 tons of food and distributed it to over 100,000 people.

Garda Pangan also holds workshops in schools and communities, teaching them how to avoid wasting food through meal planning and recycling leftovers.

It is just one of many private sector initiatives that were launched to solve the growing food waste problem in Southeast Asia. Governments in the region have introduced policies – such as food redistribution and solid waste segregation – as a way to curb the growing volume of food waste. But environmentalists said that these measures are either not strictly enforced or do not address the root cause of why households often end up discarding large quantities of food: buying more than what they need.

The problem of food waste has been highlighted in recent weeks, following China’s launch of its “Clear Your Plate” campaign in August. Recently Chinese President Xi Jinping has again stressed the need for measures and long-term mechanisms that can discourage food waste.

Melody Melo-Rijk, project manager for sustainable consumption and production at the World Wildlife Fund-Philippines (WWF), said urbanization and growing affluence in the fast-growing Southeast Asian economies have promoted consumerism. This, in turn, has increased the volume of food waste.

“People are buying more than what they need because they have stronger purchasing power and higher disposable income,” Rijk told China Daily.

Most people are also living in urban areas and have lost their connection to the rural farmers who grow their food. Rijk said that a survey done by WWF among school children in the Philippines revealed that most of them think that food only comes from the supermarket.

“They don’t know where the food is grown or how it was created,” Rijk said, adding that WWF is advocating for food sustainability education to let people know how much resources were used to produce food, encouraging them to be more conscious of their consumption.

“For example, you need 120 days to grow rice. That doesn’t include the time you need to prepare the land for planting and the processing and distribution of harvested rice.”

Soma, who has extensively studied Indonesia’s food systems, said more affluent Indonesians tend to buy more than one refrigerator – and store more food than what they can eat.

“Indonesians are spending money to dine out, but at the same time, they still shop for food to be stored at home. They end up wasting food because the food (had gotten spoiled) as it was stored for a long time in the refrigerator,” she said.

Mae Ooi, co-founder of Mentari Alam EKO, a Kuala Lumpur-based manufacturer of industrial compost machines, said the first step to cutting the volume of food waste is to “buy as you need and use up what you have”.

Ooi said there are “unavoidable” food waste items such as fruit peels and kitchen scraps. For this, her company is designing a smaller compost machine that can be used at home.

Ooi said households can compost food waste and use it to grow their own food. Better yet, families can join together to compost waste and create a community garden.

“Most people know how to recycle plastic and paper, but they are clueless when it comes to food waste,” Ooi told China Daily. Most food waste thus ends up in landfills as people are not informed that it can instead be composted and converted into a resource such as fertilizer for the garden or as biogas.

The Food and Nutrition Research Institute in the Philippines said an average Filipino household wastes 43 grams of rice each day. This means that the country’s nearly 23 million households throw away over 900,000 kilograms of rice every day.

Malaysians dump over 16,000 tons of food each day – enough to feed 12 million people – according to the Solid Waste and Public Cleansing Management Corporation. Singapore produced over 700,000 tons of food waste in 2019, according to the National Environment Agency (NEA). NEA said the city-state’s food waste has increased by about 20 percent over the past decade and is expected to grow in the next few years on the back of its growing population and economic activity.

Most of the food waste ends up in landfills, compounding the region’s garbage problem. Southeast Asia produces 1.14 kg of municipal waste per capita each day, according to the United Nations Environment Programme.

“When food-waste breaks down in a landfill, it produces greenhouse gas emissions that are 23 times more potent than carbon dioxide and contributes to global warming. In fact, food waste accounts for 14 percent of global carbon emissions,” she said.

Bachtiar said people tend to take the abundant supply and ready access to food for granted, not realizing that wasted food is also an economic loss.

“When we waste food, we also waste all the resources that were used to produce food – land, water, labor and transportation cost,” she said.

Rijk of WWF observes the same trend in the Philippines, noting that while an expanding middle class waste food, most of the country’s poor can barely afford three square meals a day.

She said that people need to be more conscious of food waste at this time as the pandemic has damaged most people’s livelihoods and increased poverty incidence.

“We need to be more conscious of what we buy and plan our meals. We also need to handle food properly so it won’t spoil easily. We can also share our extra food to people who need it more,” Rijk said.