E-waste an aggravating heap of a toxic problem 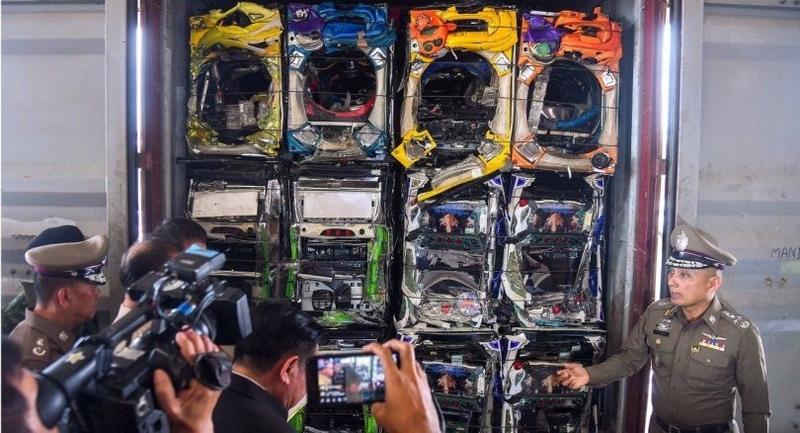 BANGKOK - Failure to pass tough laws and regulations has made Thailand an easy target.

A 100-rai (16-hectare) recycling plant in Chachoengsao province had been reported as having some of its lead furnaces engulfed in a fire a few months ago, and that’s how the country was exposed once again to a shocking fact – that Thailand has become a critical hub of transboundary electronic waste transport due to its weak laws and poor e-waste management regime.

Thailand is now among the world’s worst countries in terms of the volume of electronic waste, because foreign investors are smuggling the trash here – declaring it as second-hand goods – for disposal

The officers found improper waste disposal and the seepage of heavy metals from e-wastes including huge piles of keyboards, electrical wires and computers overseen by undocumented workers.

The facility, allegedly owned by a Chinese businessman, was found to have illegally imported electronic waste to other locations, despite itself being legally registered as a recycling plant.

Four more facilities in other areas as far away as Lam Chabang seaport were reported to have committed similar offences, prompting PM General Prayut Chan-o-cha to vow to crack down on the transport of illegal electronic waste.

“Thailand is now among the world’s worst countries in terms of the volume of electronic waste, because foreign investors are smuggling the trash here – declaring it as second-hand goods – for disposal,” Weerachai had said during the raid, suggesting the problem has been aggravated by illegal imports.

As electrical and electronic appliances have become part of the everyday life of people worldwide, the volume of e-waste has been growing in a number of countries, including Thailand.

The UN’s Global E-waste Monitor 2017 report addressed the increasing levels of e-waste and its improper and unsafe treatment and disposal through burning or at dumpsites.

China, meanwhile, was cited as generating the highest e-waste quantity both in Asia and in the world, at 7.2Mt.

In contrast to the growing volume, the report noted that only 20 percent or 8.9Mt of e-waste was documented as having been collected and properly recycled, while 80 percent, or 35.8Mt, was not.

Since the first national strategy of integrated e-waste management was endorsed for implementation in 2007, at least around 2 million pieces of discarded appliances or e-waste, weighing around 70,000 tonnes, were recorded.

The volume has reportedly grown since, to around 24 million pieces in 2016, when the second strategy – that runs until 2021 – replaced the first edition.

Statistics shows that the volume of e-waste in Thailand has been growing, with the volume in 2017 standing at around 400 billion tonnes, while 30,000-40,000 tonnes more were imported from other countries

Besides local consumption, e-waste in the country also comes from transboundary movements, as demonstrated in the recent incidents.

The e-waste problem was largely addressed in the first and second strategies since 2007. Although some problems in regard to e-waste have been resolved following the implementation of the first strategy, several longstanding problems remain while new problems have emerged due to changes in the environmental, social, and economic contexts and technologies. The strategies noted that public awareness about e-waste among electronic appliance consumers was still at a low level, with people lacking the knowledge that these wastes are hazardous and need proper disposal.

As well, a number of local organisations fail to properly separate their trash, while producers lack the motivation to help introduce or invest in proper recycling systems.

The result is insufficient separation of e-waste, an insufficient number of recycling plants, and the improper disposal by small or unregistered recycling companies.

E-waste continues to be smuggled into the country, while government fails to eliminate the incentives behind its transboundary transport.

Most importantly, current laws and regulations lag desperately behind the rapidly growing heap of a problem, as the strategies make clear.

As a former director responsible for environmental assessment at the Office of Natural Resources and Environmental Policy and Planning, Sonthi Kotchawat still eagerly follows e-waste issues and regularly posts updates on the situation to his Facebook page.

Recently, Sonthi cited statistics demonstrating that the volume of e-waste in the country has been growing, with the volume in 2017 standing at around 400 billion tonnes, while 30,000-40,000 tonnes more were imported from other countries. 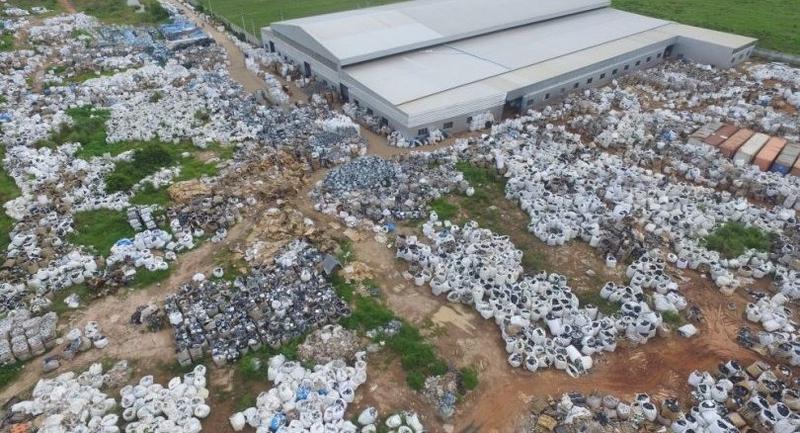 This undated photo shows e-waste discovered by authorities in Thailand. E-waste continues to be smuggled into Thailand, but the Thai government fails to eliminate the incentives behind its transboundary transport. (PHOTO / THE NATION)

While the country is struggling with e-waste produced within the country, e-waste imported from other countries exacerbates the situation.

Thailand ratified the Basel Convention in 1998, resulting in the transport of hazardous waste from member countries being regulated to different degrees – from zero imports to limited imports.

Thailand’s Industrial Works Department – via its laws including the Hazardous Waste Act – has largely been responsible for regulating e-waste.

Those wastes are allowed to be imported into the country, with conditions set out in 3/2550 of the Hazardous Waste Act, which was amended following the convention.

As Sonthi noted in his post, the fourth condition, which requires that importing e-waste for “separation” or “transformation” of materials for reuse must be done in line with approved origins and destinations.

In Thailand’s cases, they are recycling facilities registered as 105 and 106 factories.

But in order to avoid the complicated regulations and controls under the Convention, importers of e-waste tend to declare the wastes are being imported for the purpose of reuse or modifying instead of for “separation”.

What we lack is a tool to help us enforce a comprehensive response to the problem. If we have a law in place, we would then be able to deal with it systematically and appropriately

Once in Thailand, the materials are in fact separated, not for possible reuse, but rather to extract the valuable materials found within the e-wastes, including minerals such as gold, copper, zinc, and palladium along with other high-value recoverable materials. In the extraction process, toxic chemicals are released to the environment.

As estimated by the Global E-Waste Monitor 2017 report, this business contributed around $55 billion worldwide in 2016, a figure exceeding the gross domestic product of most countries in the world.

Sonthi said the influx of e-waste illegally transported to Thailand can be connected to China’s recent new policy against e-waste. Since January this year, China has imposed a total ban on imports of 24 hazardous waste, much of which is e-waste that was previously accepted for recycling within that country. Those wastes are being diverted to other countries, including Thailand, which recently saw additional Chinese-owned recycling facilities established in Chacheongsao that is close to the Laem Chabang Industrial Estate.

To curb the trend, Sonthi has placed hopes on an e-waste management bill drafted four years ago, but still under deliberation by the National Legislative Assembly.

Besides regulating e-waste produced in the country – from production to disposal – it could force further amendments to the Hazardous Waste Act with a timely announcement responding to the current situation, Sonthi suggested.

Tara Buakamsri, Thailand's country director for Greenpeace Southeast Asia and a long-time anti-toxic campaigner, said e-waste is actually a trade in toxins that comes with high values, and that’s one reason why it is complicated to deal with. Often, it involves transnational crimes that outpace the country’s capacities to deal with them.

As such, Thailand is now dealing with the situation case by case, and this makes it hard for the country to catch up with the trend.

Tara said the country lacks integrated or direct regulations to deal with the problem, and as such it now is the time for the e-waste management bill to be pushed forward and put in place.

The e-waste trade, he said, is quite a grey area, and so legislation is needed to bring clarity to the issue and allow the country to get on top of the problem. That would include banning e-waste imports, as was intended under the amended Basel Ban.

“What we lack is a tool to help us enforce a comprehensive response to the problem. If we have a law in place, we would then be able to deal with it systematically and appropriately, both in economic and social aspects. Last but not least, public participation is important, as the issue actually involves everyone,” said Tara.