Signs of better days ahead 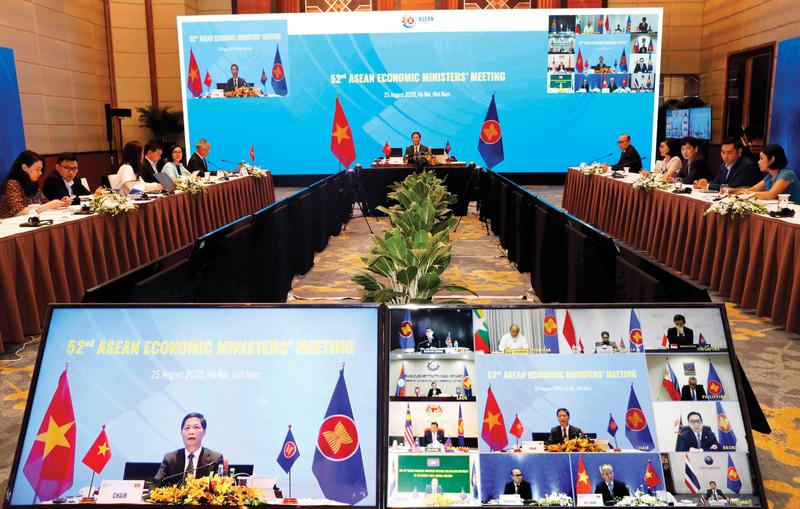 A photo taken in Hanoi, capital of Vietnam, on Aug 25 shows delegates attending the 52nd ASEAN Economic Ministers’ Meeting via videoconference. Economic ministers of the 10 members of the Association of Southeast Asian Nations on Aug 25 discussed the response to and recovery from the COVID-19 epidemic and its impacts. (PHOTO / VNA VIA XINHUA)

Asia’s path to recovery may look precarious but some experts are saying the worst is over, with China expected to play a key role leading the region-wide rebound.

Suan Teck Kin, executive director and head of research at Singapore’s United Overseas Bank (UOB), believes the GDP performance of many Asian countries in the second quarter this year should be the worst of the cycle, and things should get better unless there is another large-scale lockdown.

China will be one of the few countries in the world producing a positive growth number this year, he said, and it can be the locomotive that drives economic recovery for the region and beyond. In the second quarter, China’s economy reversed a 6.8 percent first-quarter decline and posted year-on-year growth of 3.2 percent.

“(China’s recovery) is probably the most positive factor for the world economy and also for Asia,” Biswas said. “China is the world’s second-largest economy and is a huge market for exports for most of the other Asian countries, and also for Australia and for New Zealand.”

Suan said “China is an important factor” for a global recovery.

He added that China’s performance will be particularly important for the region of ASEAN, the Association of Southeast Asian Nations. “If China shuts down, we will be unable to get our goods or the needed inputs from China. Now China is back on its feet, so that should be able to help us get through this challenging period.”

China has been ASEAN’s largest trading partner for 10 consecutive years. China’s trade with ASEAN reached about US$362 billion in the first seven months of 2020, up 6.6 percent year-on-year, data from China’s General Administration of Customs showed.

During the same period, ASEAN accounted for 14.6 percent of the nation’s total foreign trade volume. The 10-nation bloc became China’s largest trading partner for the first time in the first quarter of this year, surpassing both the European Union and the United States, according to Xinhua News Agency.

“The more developed ASEAN nations, like Singapore, Malaysia and Thailand, they are more linked to China’s global value chain and the more impact they will feel from China’s recovery,” said Suthiphand Chirathivat, executive director of the ASEAN Studies Center at Thailand’s Chulalongkorn University and executive director of Thai conglomerate Central Group.

So China’s recovery is definitely of key interest to ASEAN. Suthiphand also noted that for many Southeast Asian nations, China is an important source of tourists.

One ASEAN country badly hit by the pandemic downturn is Malaysia, whose economy shrank 17.1 percent year-on-year in the second quarter, the worst slump since the fourth quarter of 1998. Similarly, second-quarter GDP in countries like Thailand and South Korea saw the biggest falls since 1998 and the Asian financial crisis. In Japan, Q2 GDP shrank at an annualized 27.8 percent in real terms, the worst since comparable data became available in 1980.

“Between April and June, the restrictions for COVID-19 were the tightest. All these economies basically shut down during this period,” said Suan. “So it is not surprising to see such horrendous (GDP growth) numbers for those countries.”

Many Asian countries rely on international tourism, and the suspension of international flights and lockdowns have heavily affected that industry, said Suan. Also, the lower demand for goods — from economies in the West not performing well due to COVID-19 — affects many export-oriented Asian economies.

However, “the worst is already over,” Biswas said. “The pandemic has been a public health crisis, so it is very different from a financial crisis like (the global financial crisis) in 2009.”

He noted the sharp shocks have been concentrated in the first half of 2020. As the world economy slowly recovers, the medium- to long-term impact on Asia-Pacific growth will be relatively moderate, he said, with Asia still on track to represent half of global GDP by 2030.

Biswas noted signs of recovery from the June data.

Looking, for example, at the purchasing managers’ index, which IHS Markit surveys monthly, Biswas said there was a steep decline in April, but quite a strong rebound in many countries in June as lockdowns were eased.

He forecasts growth for the whole Asia-Pacific region of 0.6 percent and 0.7 percent, respectively, in the third and fourth quarters — up from the 2.8 percent contraction in the second quarter. He sees the economy shrinking by 1.9 percent for the full year.

A July report from the firm said emerging markets saw a return to growth in their production trends for the first time since January, outperforming developed ones. Countries like Malaysia and China recorded some of the strongest output gains globally, while Russia, Myanmar, the Philippines and Vietnam also reported higher production trends.

To boost their economies, many countries in Asia have launched stimulus packages, ranging from Singapore’s stimulus equal to 20 percent of GDP, to India’s US$267 billion special economic package.

“Even though the governments put in huge amounts of stimulus, they cannot offset such a huge shock of shutting down (the whole) economy,” said Biswas. Most importantly, he said, the quicker the lockdowns can be lifted, the quicker these economies can get closer to normality again.

UOB’s Suan also said the fiscal support can only stop economies from bleeding, but what will help them perform normally is to restore the economic infrastructure by getting rid of COVID-19.

Suan said countries cannot ignore the importance of international cooperation during a global pandemic. “If countries are able, at a certain degree, to synchronize their preventive measures and deal with this disease in a cohesive (way), that would go toward putting all the economies back on track,” he said.

Dionisius Narjoko, senior economist with the Economic Research Institute for ASEAN and East Asia, based in Jakarta, Indonesia, said the world will see different types of economic activities after the pandemic, including more robotics in factories, which means governments have to be prepared for reform.

Noting the pandemic has fundamentally changed people’s way of living and working, Narjoko said regional governments have to conduct regulatory reform or other social reform to prepare for a new type of production model that embraces new trends, including the digital economy.

Reform in the education sector is also needed to upskill the workforce, said Narjoko.

Though believing the region’s economy will perform better in the second half of this year, Narjoko said there is still much uncertainty as to how the world can end the pandemic, in terms of the resurgence of COVID-19 and distribution of vaccines.

By 2021, the region’s economy is expected to show a strong rebound with growth of 5.1 percent, according to IHS Markit predictions. Strong recoveries are expected in countries like India, the Philippines, Vietnam and Malaysia.

“The economic recovery is about the recovery of demand,” said ERIA’s Narjoko, who hopes China’s recovery will enable Southeast Asian nations to boost production.

Expecting the pandemic’s impact to start to wear off next year, Suan said he thinks most of the economies in Asia should be able to get back to pre-COVID-19 levels by 2022 or 2023 and onwards.

Noting that the Regional Comprehensive Economic Partnership is expected to be officially signed in November this year, Thai entrepreneur Suthiphand said RCEP will take regional integration to a new level and showcase multilateralism to the world.

RCEP is a proposed free trade agreement between ASEAN and its six FTA partners. The pact accounts for 45 percent of the world population, 40 percent of global trade and around one-third of the world’s gross domestic product.

Suthiphand said he foresees the business-to-business exchange between China and ASEAN continuing to grow after the pandemic.