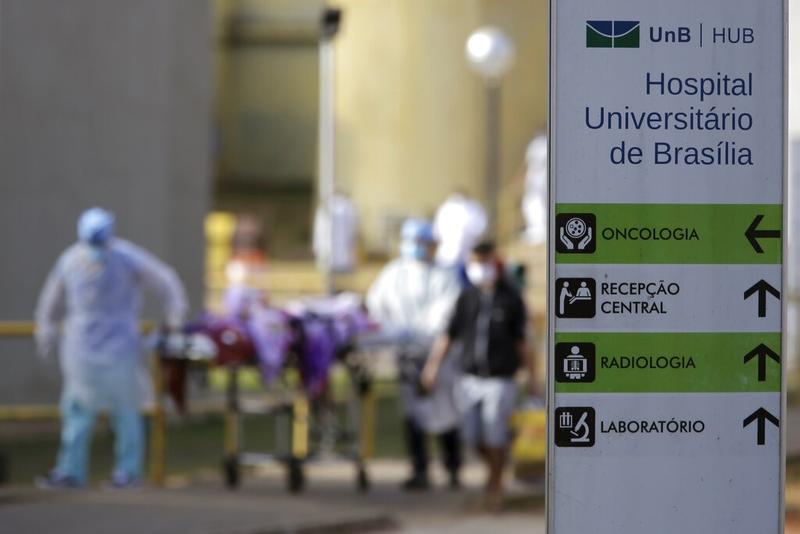 Editor's note: The world faces huge challenges during the global spread of COVID-19 and maybe even greater ones when it is over. Here, in the 17th part of a series titled "One World, One Fight", we look at how countries can work together to fight the virus and meet the challenges when the pandemic ends.

China has offered assistance to Brazil as the Latin American country struggles to keep its economy afloat and its population healthy during the COVID-19 pandemic.

The commercial partnership with China accelerated development of the beef sector. Amid this Chinese demand, Brazil innovates, develops and improves

Mauricio Palma Nogueira, agronomist and director of Athenagro, a consultancy in Sao Paulo

Brazil is taking a massive economic hit from the outbreak, with infections continuing to spread and unprecedented challenges facing indigenous groups living in the Amazon rainforest.

With more than 3 million cases of COVID-19 and over 101,000 deaths, the country is the worst affected in the region, and the second-most-affected in the world.

Hospitals are on the verge of collapse, with most health resources focused on fighting the pandemic.

However, Brazilians remain divided on the measures the federal government should take to curb the outbreak.

Laura Olivera, a content producer for China Central Television in Sao Paulo, said: "Brazil is divided into opposing camps. On the one hand there are people who applaud the policies of President Jair Bolsonaro, following every word he says and supporting him unconditionally.

"On the other hand there are people in total disagreement with the measures he is taking, with his comments supporting use of the medication (hydroxychloroquine), and with measures being relaxed."

COVID-19 has had an unprecedented impact on the Brazilian economy, with the government forecasting GDP to fall by 4.7 percent this year. According to Reuters, it would be the biggest decline since 1900. 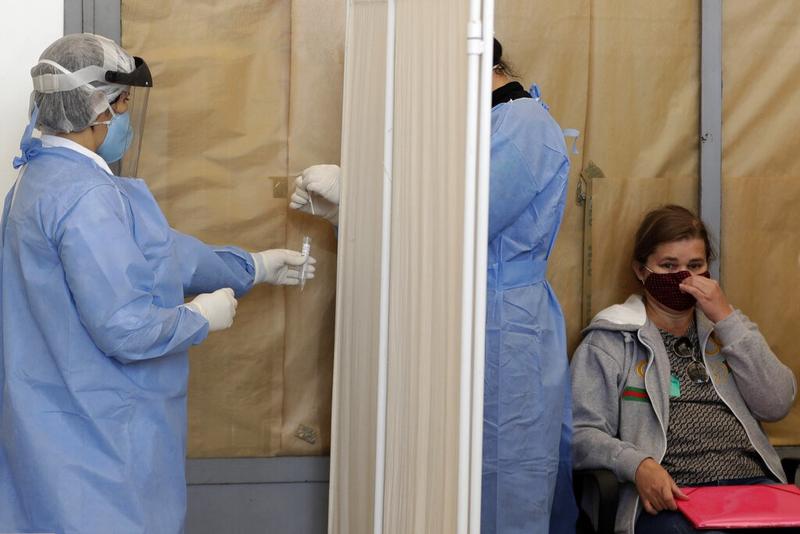 Official data show unemployment standing at 12.9 percent, but analysts believe the figure could be much higher, as vast numbers of people living in small communities in forest and rural areas might not have been counted.

Many people in Brazil had never experienced lockdowns and there was no federal mandate to impose them. However, some state and local governments started enforcing their own lockdown measures in mid-March, when the country reported its first cases of COVID-19.

By March 24, more than 300 cases per day were being reported in Brazil, and Sao Paulo, the country's most populous city, went into lockdown. On the other hand, Rio de Janeiro did not impose lockdowns until May 8, when the number of new daily cases rose to 10,000.

Cities nationwide began loosening measures in June. Many observers said the lockdowns had not been strict enough and few people observed them. On Aug 5, Brazil reported 57,152 new cases.

Pedro Tunes, co-founder of the scientific portal Tunes Ambiental in Belo Horizonte, said: "Most people are just tired of quarantining and have stopped doing so, despite the number who are dying. Of course, a lot of people have to work, but even in cities where only essential businesses should continue, we see bosses making everyone go to work." 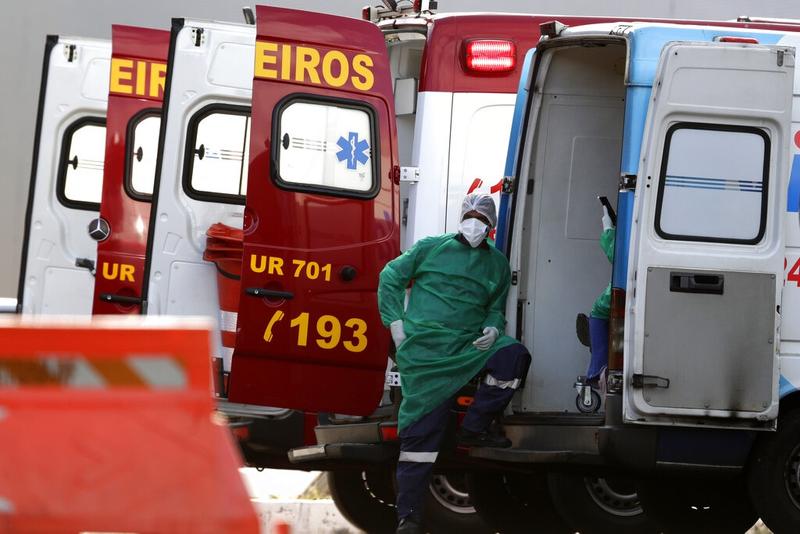 Health workers take a break in Brasilia on Aug 3 after transferring a patient suspected to have the disease. (ERALDO PERES / AP)

China's potential to be a key partner for Brazil is rising once again, thanks to demand for agricultural produce such as soybeans and beef.

Mauricio Palma Nogueira, an agronomist and director of Athenagro, a consultancy in Sao Paulo, wrote in an opinion piece published by the Brazilian Beef Exporters Association, "The expansion of Chinese purchases coincides with the consolidation of Brazil as the main (beef) exporter in the world.

"The commercial partnership with China accelerated development of the beef sector. Amid this Chinese demand, Brazil innovates, develops and improves. Together, the two countries are breaking an old paradigm－that the consumption of beef is inaccessible to the poorest and that, in the future, it will also be inaccessible to the middle class," Nogueira wrote.

This demand could prevent the Brazilian economy from falling even further, as beef is not the only commodity that China is buying in significant quantities－its imports of Brazilian soybeans have risen by 91 percent year-on-year to a record high.

Last year, Brazil exported US$64 billion worth of goods and services to China, according to official data, while in the first five months of this year such exports rose by 12.4 percent to US$27 billion.

China is also helping Brazil with healthcare. On July 29, health authorities in Wuhan, capital of Hubei province, where the virus was first identified, held a virtual forum, the China-Brazil COVID-19 Pandemic Prevention and Control Online Conference.

They discussed prevention and treatment measures with Brazilian colleagues and also first-hand experiences in tackling COVID-19.

The forum was one of a dozen or so videoconferences Chinese officials have organized with their Brazilian counterparts to discuss the disease.

To date, some 20 Chinese provinces and municipalities, along with more than 30 companies, have donated medical supplies and equipment to Brazil, which could become key to the development of a Chinese vaccine.

The biopharmaceutical company Sinovac Biotech, based in Beijing－one of the frontrunners in the race to find a vaccine against SARS-CoV-2－has chosen Brazil as one of the countries in which to conduct clinical trials.

Jorge Kalil, professor of clinical immunology and allergy at the University of Sao Paulo, who is leading a research team working on a domestic vaccine, said that as the disease is continuing to spread in Brazil, it is an ideal testing site. The country also has a relatively high quality of medicine and a diverse population, which can also help.

However, ending the pandemic in Brazil may prove challenging even after a vaccine is developed. COVID-19 has reached the country's poorest people, including isolated tribes in the Amazon rainforest. Cities in the heart of the jungle, such as Manaus, have seen patients' bodies piling up. 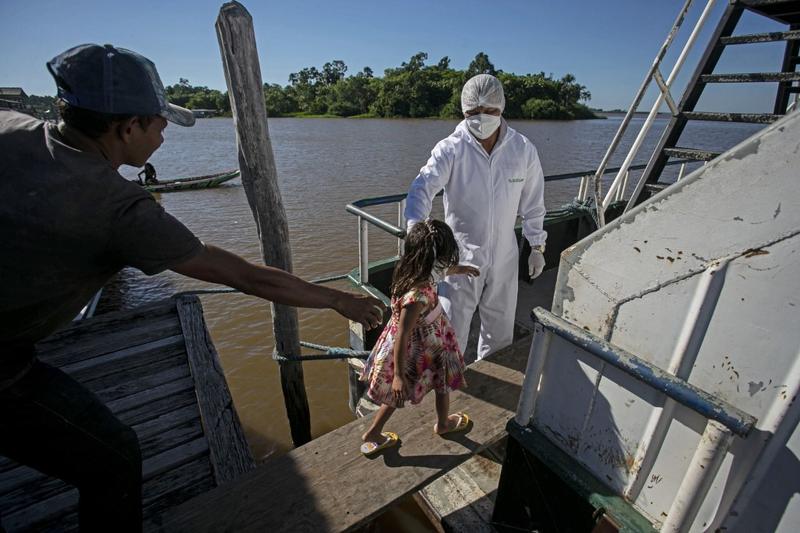 A health worker from the Medical Care Ship Unit UBS attends a girl at the riveside community of Salvacao, on the river Ipiranga, municipality of Melgaco in Marajo Island, state of Para, Brazil, on July 28, 2020 during the COVID-19 coronavirus pandemic. (TARSO SARRAF / AFP)

"That month, coffins from the largest public cemetery in Manaus began to be buried in mass graves."

According to the Articulation of Indigenous Peoples of Brazil, 635 such people have died from COVID-19. A total of 21,645 cases have been confirmed among 146 ethnic groups.

Ana Luiza Tunes said, "Indigenous people from the Amazon and throughout Brazil do not have an immunological memory to resist the simplest flu. These native peoples may disappear if the coronavirus spreads through their villages."

Since the pandemic emerged in Brazil, the country has had three ministers of health. The incumbent is Eduardo Pazuello, an army general without any prior experience in health. The two previous ministers resigned due to differences with the president over managing the pandemic.

William Magnusson, a senior researcher with the biodiversity unit of the National Institute of Amazonian Research in Manaus, said, "Almost all healthcare not associated with COVID-19 has been shut down, but the impact of this, independent of COVID-19 infections, cannot be determined because there is not enough effective testing."

Hugo Nogueira, an international relations analyst in Belo Horizonte, said: "Sometimes, we feel as if we are making fools of ourselves by quarantining. We can see traffic returning to normal, as if there have been no changes due to COVID-19. People are chatting and getting together, going out in the streets without wearing masks, and partying during weekends. Even those who never exercised before are now running on the streets.

"If everyone is returning to normal lives, we are also tempted to go out and pretend that there is no pandemic."