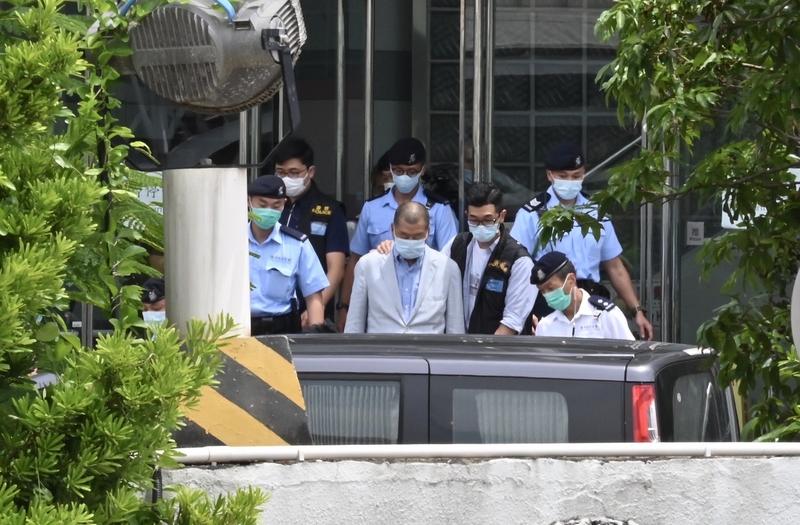 Hong Kong police arrested local media tycoon Jimmy Lai Chee-ying and nine others on Monday on suspicion of breaching the National Security Law and other offenses.

Civic leaders in the city said the operation showed the determination of the authorities to safeguard national security, while pointing out that press freedom is never an excuse for unlawful acts.

The Hong Kong and Macao Affairs Office of the State Council expressed support for the arrest of Lai.

Describing Lai as a "representative figure" of political agents who have facilitated external and foreign forces to destabilize Hong Kong, the office said the arrest has upheld justice and defended the rule of law.

According to the Hong Kong Police Force, at least 10 suspects were arrested on Monday, on suspicion of collusion with foreign or external forces to endanger national security, and conspiracy to commit fraud and sedition.

Describing Lai as a "representative figure" of political agents who have facilitated external and foreign forces to destabilize Hong Kong, the HKMAO said the arrest has upheld justice and defended the rule of law

Colluding with external forces carries a maximum penalty of life imprisonment under the National Security Law for Hong Kong.

Lai, the founder of the city's tabloid-style Apple Daily newspaper, was arrested at his residence in Hong Kong on Monday morning. Others arrested include his two sons and four of the newspaper's senior executives, according to media reports.

After the arrest of Lai, police searched the office of his media firm Next Digital with a court warrant. Twenty-five boxes of evidence were collected from the office.

Lai has reportedly met frequently with high-level US government officials since the unrest over the now-withdrawn Extradition Bill broke out in June last year. He also repeatedly requested foreign politicians to "save" Hong Kong in interviews and on social media platforms, urging them to sanction China.

In May, Lai was charged with allegedly organizing and participating in several unlawful rallies in last year's social unrest, and criminal intimidation against a reporter in 2017.

Noting that everyone is equal before the law, she stressed that individuals and organizations should never use press freedom to as a cover for unlawful behavior.