This undated photo shows a child works at a toy factory. (PHOTO / BLOOMBERG)

The coronavirus pandemic is forcing India’s children out of school and into farms and factories to work, worsening a child-labor problem that was already one of the most dire in the world.

Sixteen-year-old Maheshwari Munkalapally and her 15-year-old sister stopped attending lessons when virtually the entire economy was brought to a halt during the world’s biggest lockdown. Munkalapally’s mother and older sister lost their jobs as housemaids in Hyderabad, the capital of the southern Indian state of Telangana. The younger girls, who had been living with their grandmother in a nearby village, were forced to become farmhands along with their mother, in order to survive.

“Working under the sun was difficult as we were never used to it,” Munkalapally said. “But we have to work at least to buy rice and other groceries.”

It’s difficult to quantify the number of children affected since the pandemic erupted, but civil society groups are rescuing more of them from forced labor and warn that many others are being compelled to work in cities because of the migrant labor shortage there.

Even before the outbreak, India was struggling to keep children in school. A 2018 study by DHL International GmBH estimated that more than 56 million children were out of school in India -- more than double the combined number across Bangladesh, Indonesia, Malaysia, Philippines, Thailand and Vietnam. The cost to India’s economy, in terms of lost productivity, was projected at US$6.79 billion, or 0.3 percent of gross domestic product.

Of those children not in school, 10.1 million are working, either as a ‘main worker’ or as a ‘marginal worker,’ according to the International Labour Organization.

An even bigger issue will be for those children who are due to enter school during this time. If these children face delays in entering school, there may be an increase in the numbers of never-enrolled children, which could in turn push up child labor numbers.

Ramya Subrahmanian, The chief of research on child rights and protection at Unicef-Innocenti in Florence, Italy

Global child labor had been gradually declining in the past two decades, but the Covid-19 pandemic threatens to reverse that trend, according to the ILO. As many as 60 million people are expected to fall into poverty this year alone, and that inevitably drives families to send children out to work. A joint report by the ILO and United Nations Children’s Fund estimates that a 1 percentage point rise in poverty leads to at least a 0.7 percentage point increase in child labor.

Indonesia, the world’s fourth most-populous nation, is another country that will see large numbers of children from vulnerable families drop out of school and into the workforce. The ILO estimates about 11 million are at risk of being exploited as child laborers under current conditions, especially in the less-developed eastern parts of the country, like Sulawesi islands, Nusa Tenggara and Papua.

In India, home to more young people than any other country in the world, this lost generation of children will have substantial effects on Asia’s third-largest economy: lower productivity and earning potential, unrealized tax revenue, increased poverty levels and pressure for more government handouts.

“Even prior to the pandemic, numbers of children out of school in India and in child labor were high,” said Ramya Subrahmanian, the chief of research on child rights and protection at Unicef-Innocenti in Florence, Italy. “An even bigger issue will be for those children who are due to enter school during this time. If these children face delays in entering school, there may be an increase in the numbers of never-enrolled children, which could in turn push up child labor numbers.”

A spokesperson for the Ministry of Women and Child Development didn’t immediately respond to a text message seeking comment.

The Indian constitution provides free and compulsory education for all children in the age group of six to 14 years as a fundamental right. While Munkalapally and her sister are no longer covered by it because of their age, they are protected by the local law on child labor, which prohibits employment of adolescents between the age of 14 and 18 from working in any hazardous or dangerous occupations. The same law bars children under the age of 14 in any form of occupation except as a child artist, or in a family business. 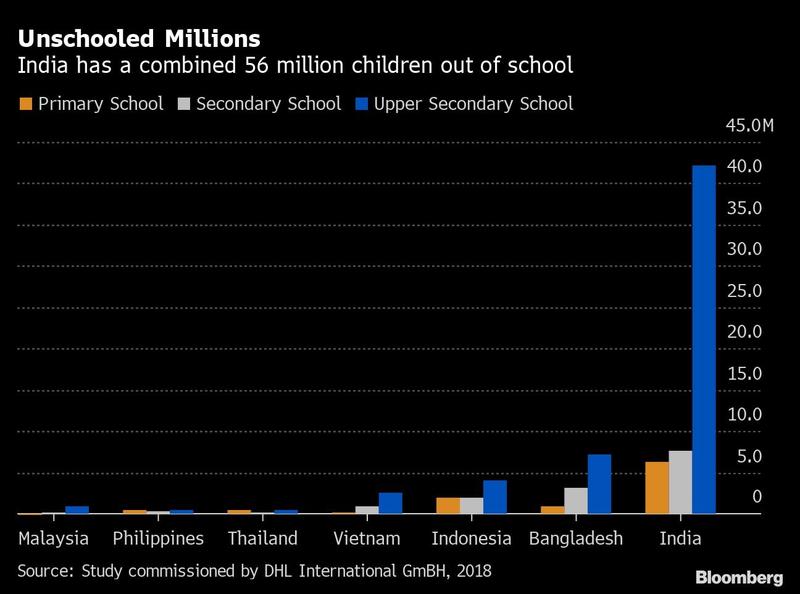 “At a household level, it’s hard to differentiate whether children are involved or not,” says Dheeraj, a program manager at Praxis: Institute for Participatory Practices, who uses only one name. The jobs may still be hazardous and against the law -- small-scale businesses such as matchbox-making can be run from home -- but the difficulty in identifying such labor leaves children open to exploitation.

Bonded labor, where people are forced to work for creditors to pay off their loans, is another avenue where families send their children to work.

A total of 591 children were rescued from forced work and bonded labor from different parts of India during the lockdown by Bachpan Bachao Andolan, a civil society group on children’s rights, founded by Nobel laureate Kailash Satyarthi.

“Once the lockdown is lifted and normal manufacturing activity resumes, factory owners will look to cover their financial losses by employing cheap labor,” the group said in a statement.

NGOs point to the fact that the real spike in child labor is yet to come. When economic activity begins accelerating, there is a risk of returning migrants taking children along with them to the cities. 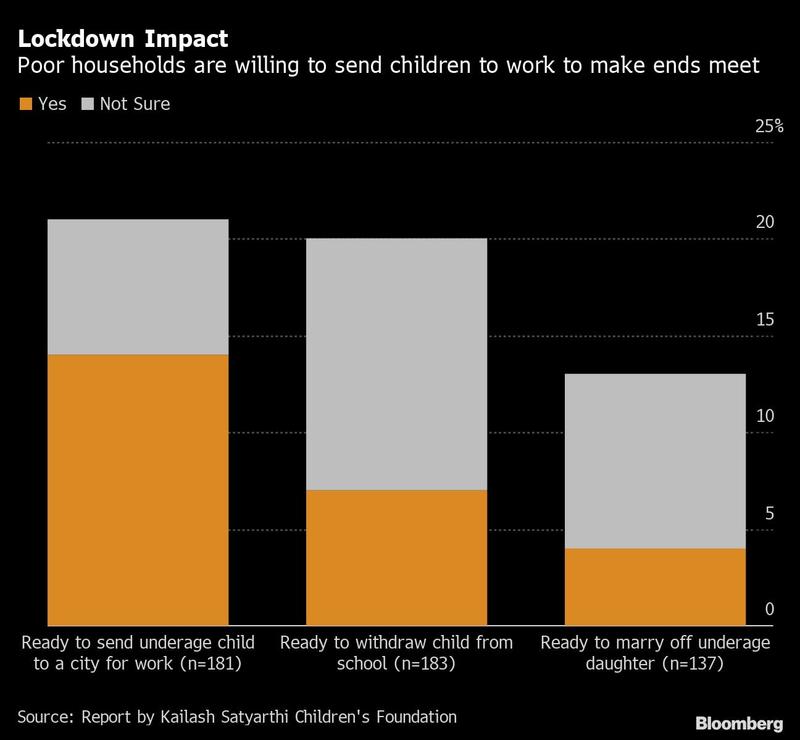 “When hotels reopen, construction work starts, the railways get back on track, when everything opens up, this community that has returned will be the main source that take our children to the cities,” said Abhishek Kumar, program coordinator at SOS Children’s Villages.

Children may be seen as a stop-gap measure to fill jobs left vacant by migrant laborers who fled cities for their rural homes during the lockdown.

“The burden has shifted to the poor households within urban areas,” said Rahul Sapkal, an assistant professor at the Centre for Labour Studies in the Tata Institute of Social Sciences in Mumbai.

While children aren’t exactly engaging in heavy labor usually carried out by adults, if parents take their children along for support in their jobs, even if it’s to avoid leaving them at home, a precedent is set, and such activity is normalized, he said.

Munkalapally’s mother, Venkatamma, is unhappy that her children are now forced to work, but cannot think of any alternative. The money they make is still not enough.

“Vegetables, rice, spices, soap, we still cannot afford these despite the four of us working,” she says. “It would be better if we could go back. In Hyderabad, even if the work is difficult, the pay is better.”