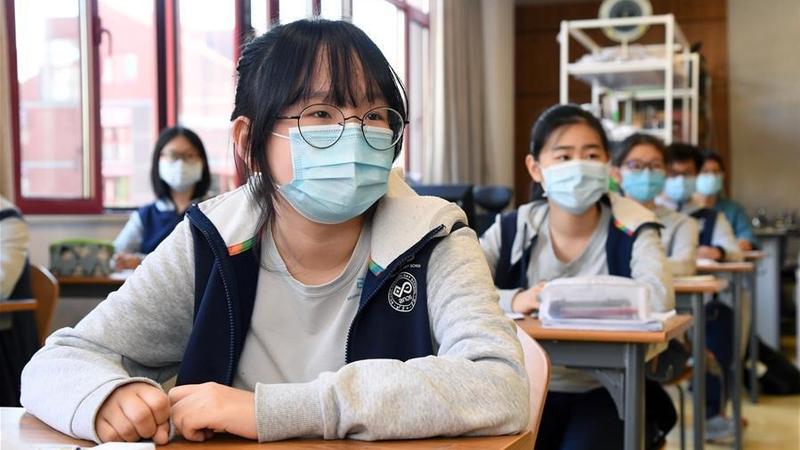 Students listen during a lesson at Beijing National Day School - Longyue in Haidian district in Beijing, capital of China, May 11, 2020. (PHOTO / XINHUA)

All the 14 fresh local cases were reported in the Xinjiang Uygur autonomous region, the National Health Commission said in its daily report. All of them were posted in the regional capital Urumqi, according to the local authorities.

Fourteen out of the 49 fresh infections were local cases reported in Xinjiang while the other 35 were imported cases, with Shanghai posting the bulk of them with 15 new cases

Eighteen out of the 35 new imported cases were reported in Shanghai while the provinces of Shandong and Sichuan each saw four such cases, Guangdong and Shaanxi provinces reported two cases each, Liaoning province posted two cases and Zhejiang province reported one case, the commission said.

All the fresh imported cases in Shanghai involve Chinese nationals returning to the country from the United Arab Emirates (UAE).

No deaths related to the disease were reported while one new suspected imported case was reported in Shanghai.

The commission said that another 64 patients were discharged from hospitals after recovery, adding that there were 802 patients still being treated, including 41 in severe condition.

There were still seven suspected cases, the commission said.

Dalian's government said lockdown management in all four medium-risk areas in the city have been lifted. The coastal city now has one high-risk zone

The commission said 283 asymptomatic cases, including 136 from outside the mainland, were still under medical observation.

A total of 2,847 COVID-19 patients in the Hong Kong SAR, 46 in the Macao SAR, and 441 in Taiwan had been discharged from hospitals after recovery.

Dalian city in Liaoning province lifted the neighborhood lockdown policy in another medium-risk area from Monday after no new domestically transmitted cases were reported in the city for several days, local authorities said.

The city government said at a press conference that lockdown management in all four medium-risk areas of Dalian had been lifted after the adjustment. The coastal city now has one high-risk zone.

Schools in Beijing will begin to reopen for the autumn semester starting form Aug 29, according to a notice

Meanwhile on Sunday, education authorities in Beijing announced the dates for the reopening of schools in the capital city for the autumn semester.

Kindergartens will reopen on Sept 8 and Sept 11, according to the notice.

Colleges can decide their own time for students to check in or register starting from Aug 15 after getting approval from the epidemic prevention and control leading group and education authorities.