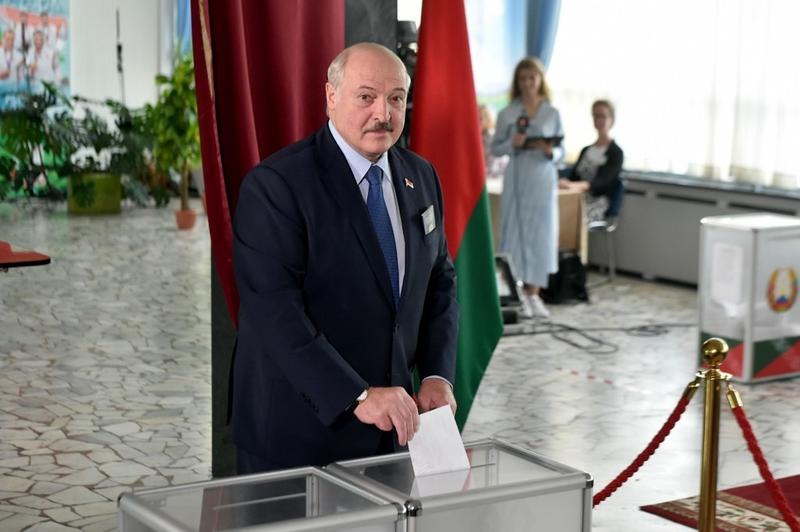 Belarus' President Alexander Lukashenko casts his ballot at a polling station during the presidential election in Minsk on August 9, 2020. (SERGEI GAPON / POOL / AFP)

Belarusian President Alexander Lukashenko won a landslide re-election victory, the central election commission said on Monday, after late night clashes between police and thousands of protesters who said the vote was rigged.

At least one person was killed after being knocked over by a police prisoner van and dozens were injured in clashes between police and protesters, a representative of the rights group Spring 96 said on Monday

Figures released by the election commission on Monday gave Lukashenko 80% of the vote.

Svetlana Tikhanouskaya, a former English teacher who emerged from obscurity a few weeks ago to become Lukashenko's main rival, won 9.9% of the vote, the data showed.

Riot police used flash grenades and water cannon in confrontations with thousands of protesters who gathered in the center of the capital, Minsk, after the poll was announced, the RIA Novosti news service reported.

At least one person was killed after being knocked over by a police prisoner van and dozens were injured in clashes between police and protesters, a representative of the rights group Spring 96 said on Monday.

Lukashenko, 65, a former Soviet collective farm boss, faced unprecedented protests against his rule before the vote, after opposition groups united behind Tikhanovskaya, when other contenders were either jailed or kept off the ballot.

The stay-at-home mother, who ran after her husband Sergei, a political blogger, was detained and barred from the race, drew huge crowds at rallies nationwide.

Her rallies have drawn some of the biggest crowds since the fall of the Soviet Union in 1991.

Foreign observers have not judged an election to be free and fair in Belarus since 1995.

A severe crackdown on protests could hurt Lukashenko’s attempts to mend fences with the West amid fraying ties with traditional ally Russia, which has tried to press Belarus into closer economic and political union.

Human rights groups say more than 1,300 people were detained in the crackdown ahead of the election, including independent election observers and members of Tikhanouskaya’s campaign team.