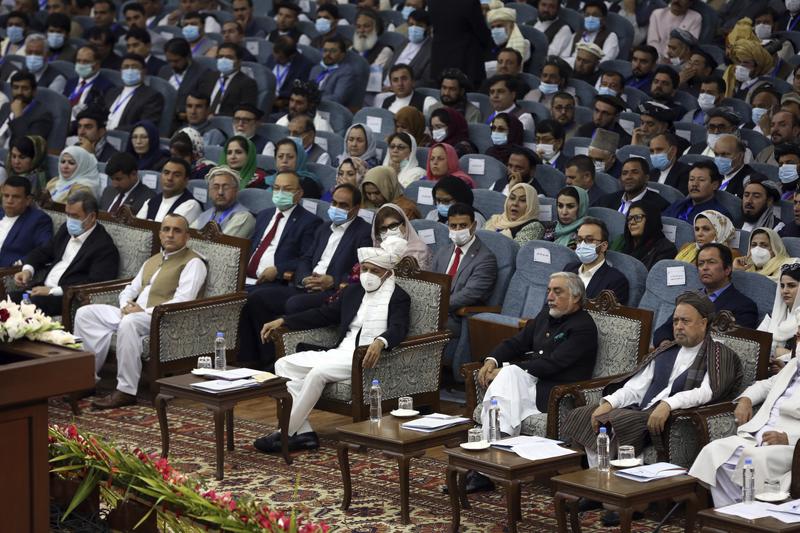 Afghan President Ashraf Ghani, center, wearing a protective face mask to help curb the spread of the coronavirus attends an Afghan Loya Jirga meeting in Kabul, Afghanistan, Aug 7, 2020. The traditional council opened Friday in the Afghan capital to decide the release of a final 400 Taliban - the last hurdle to the start of negotiations between Kabul’s political leadership and the Taliban in keeping with a peace deal the United States signed with the insurgent movement in February. (RAHMAT GUL / AP)

KABUL - Thousands of Afghan elders, community leaders and politicians gathered on Friday to debate government efforts to make peace with the Taliban, in particular the fate of 400 hard-core Taliban prisoners whose release could clear the way for talks.

The government has released all but some 400 militants it says have been convicted of the worst crimes including killings, drug trafficking and kidnapping

Some 3,200 people have been invited to the grand assembly, known as a Loya Jirga, in Kabul amid tight security to debate for at least three days and then advise the government on whether the prisoners should be freed.

As part of a February pact between the United States and the Taliban allowing for the withdrawal of US troops, it was agreed that some 5,000 Taliban prisoners should be released from Afghan jails as a condition for talks between the militants and the US-backed government.

The government has released all but some 400 militants it says have been convicted of the worst crimes including killings, drug trafficking and kidnapping.

While many Afghans see the peace effort as the best hope for ending the 19-year war with the Taliban, some are concerned about the militants’ commitment to reconciliation, especially after the United States completes its troop withdrawal.

US special envoy for Afghanistan Zalmay Khalilzad, the architect of the deal allowing the United States to withdraw its forces and end its longest-ever war, warned against the Loya Jirga throwing up any complications.

“We wish the jirga participants success ... and urge them not to allow those who prefer the status quo and seek to complicate the path to peace to manipulate the process,” Khalilzad said on Twitter.

He did not elaborate.

Afghanistan’s constitution recognises the Loya Jirga as “the highest manifestation of the will of the people of Afghanistan”.

The head of its secretariat, Abdul Salam Rahimi, said its decision was necessary as President Ashraf Ghani was not empowered to release prisoners convicted of such serious crimes.

He said precautions would be taken to prevent the spread of the novel coronavirus.