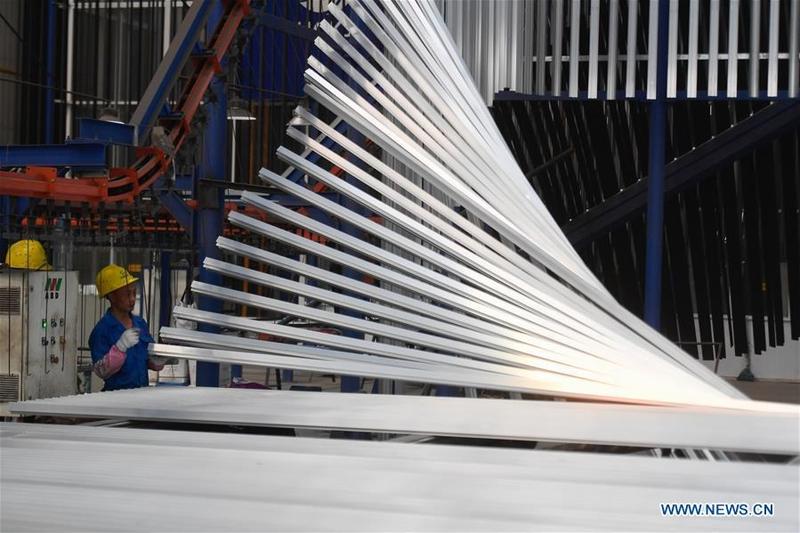 BEIJING - The purchasing managers' index (PMI) for China's manufacturing sector rose to 51.1 in July from 50.9 in June, the National Bureau of Statistics (NBS) said Friday.

It is the fifth month in a row that the figure remained in the expansion territory. A reading above 50 indicates expansion while a reading below reflects contraction.

Zhao cited the rise in the sub-indices of the manufacturing PMI as evidence of economic recovery across the board.

The sub-index for production edged up 0.1 points to 54 in July. New orders picked up 0.3 points to 51.7, rising for three consecutive months, while the sub-index measuring new export orders gained 5.8 points to 48.4.

"Enterprises stay optimistic about recovery in their industries," Zhao said.

The better-than-expected PMI figure comes as the epidemic situation in China has become stable and the economy has basically recovered.

NBS data released Friday also showed an extensive rebound in non-manufacturing sectors as their PMI came in at 54.2 in July and service suppliers, including those hit especially hard by the epidemic, showed stronger business vitality.

While July's reading was down from 54.4 in June, the non-manufacturing PMI has remained above 50 for five months in a row, data from the NBS showed.

The service sector sustained its recovering momentum in July, with the sub-index for business activities standing at 53.1, while the business expectation reading for the sector went up 2.4 points from the previous month to 61.4.

Sectors including railway and aviation transport, postal and express delivery and accommodation all logged busier business activities, with their sub-indexes all standing above 60.

In breakdown, the express delivery, accommodation and catering, telecommunications as well as securities sectors logged more vibrant business activities in July, with their sub-indexes all registering expansion from last month.

In particular, the sub-indexes for the business activities of resident services as well as culture, sports and entertainment ended a five-month contraction streak in July to rise 1.9 and 6.1 points, respectively, both standing above the 50-point mark.

The accelerated restoration of the service sector was a result of local governments' pro-consumption policies that aimed to mitigate the impacts of the COVID-19 epidemic, said Zhao.

The sub-index for the construction sector's activity rallied to 60.5 in July from 59.8 in June, returning to a relatively high expansion level, Zhao said.

The sub-index for new orders edged down 1.2 points to 51.5 percent in July, but still stayed in the expansion zone, indicating that demand in the non-manufacturing market continued to recover.

July's PMI readings point to steady recovery momentum in July despite the floods along the Yangtze River and scattered local COVID-19 cases, according to an emailed research note authored by analysts with the financial services firm Nomura.

"We expect China's official manufacturing PMI to remain at around 51.0 in the coming months," the analysts said in the note, citing growth headwinds including worsening COVID-19 situations in many parts of the world as cause for caution.

Many problems that China faces are long- and medium-term, and resolving such problems is like fighting a protracted war, according to a Thursday meeting of the Political Bureau of the Communist Party of China Central Committee.

Noting that the "protracted-war" assessment has strong implications for policies, Nomura expects the country to make a shift from a "wartime mode" for fighting the COVID-19 outbreak toward meeting structural issues and long-term challenges.

The country wrapped up the first half with GDP growth of 3.2 percent in Q2, after a virus-caused 6.8-percent contraction in the first quarter. A slew of other mid-year economic indicators including consumption, jobs and foreign trade also painted the picture of an economy disentangling from COVID-19 disruptions.

Citing a survey of 67 economists, Bloomberg News said in a recent report that China's growth in the current quarter will be 5.2 percent year-on-year, faster than the 3.2-percent expansion in the three months to June.