Nearly half of US troops exiting Germany to stay in Europe 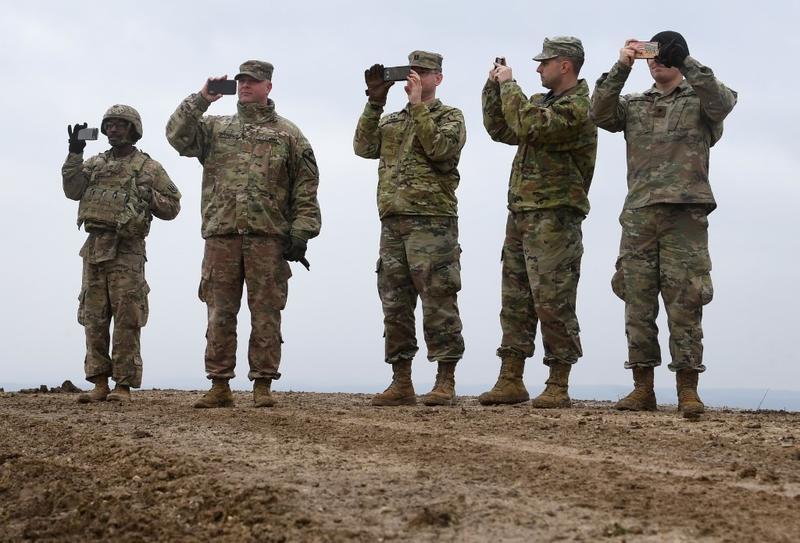 In this March 4, 2020 photo, US soldiers take pictures with their cell phones during an artillery live fire event by the US Army Europe's 41st Field Artillery Brigade at the military training area in Grafenwoehr, southern Germany. (CHRISTOF STACHE / AFP)

WASHINGTON - The US military on Wednesday unveiled plans to withdraw about 12,000 troops from Germany following a decision by President Donald Trump, but said it will keep nearly half of them in Europe to address tension with Russia.

Trump announced his intention last month to cut the 36,000-strong US troop contingent in Germany to 25,000, faulting the close US ally for failing to meet NATO's defense spending target and accusing it of taking advantage of the United States on trade.

ALSO READ: German states appeal to US Congress not to withdraw troops

Defense Secretary Mark Esper has sought, however, to present the pullout in a way that would prevent undermining NATO and its efforts to deter Russian intervention.

In remarks likely to irk Moscow, US Defense Secretary Mark Esper said some US troops would reposition to the Black Sea region and some could temporarily deploy in waves to the Baltics

In remarks likely to irk Moscow, Esper said some US troops would reposition to the Black Sea region and some could temporarily deploy in waves to the Baltics.

Other forces leaving Germany would permanently move to Italy and the US military’s European headquarters would relocate from Stuttgart, Germany, to Belgium.

In total, about 5,400 troops of the 12,000 leaving Germany are expected to remain in Europe. Many of the remaining forces will be based in the United States but will rotate into Europe for temporary deployments without their families.

“I’m telling you that this is going to accomplish what the president said with regard to getting us down to a lower number in Europe, and it meets his other objectives I outlined with regards to the strategic piece,” Esper said.

Still, the moves out of Germany represent a remarkable rebuke to one of the closest US military allies and trading partners.

The premiers of four German states that host US troops have appealed to members of the US Congress to block Trump’s withdrawal, which current and former American officials have criticized as politically, not strategically, driven.

If he is elected president, Democrat Joe Biden will review the Republican incumbent’s decision to withdraw the troops from Germany, a top Biden aide told Reuters earlier this month.

US officials stressed that only a relatively small number of advanced units would move anytime soon. The rest of the troop movements would take years to fully implement.

“It will still be months to plan and years to execute because it is very complex,” one US official said, noting potentially billions of dollars in required funding and more planning by the branches of the armed forces.