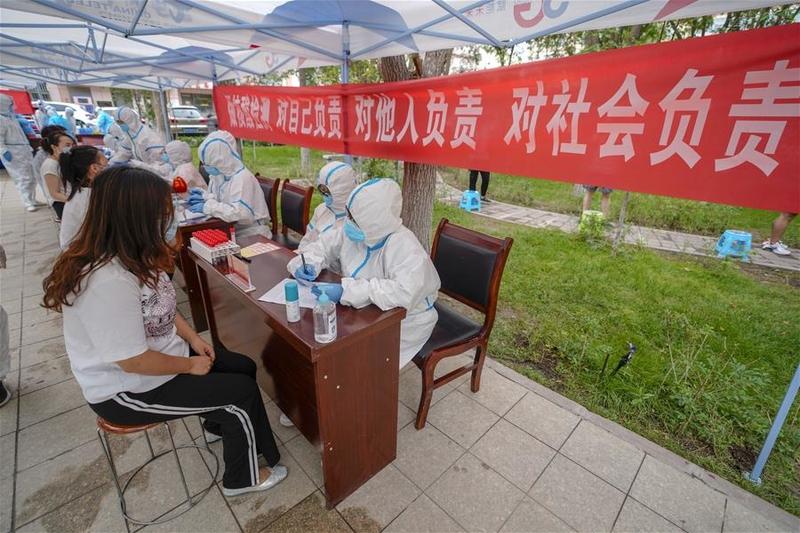 Medical workers collect swab samples for residents at Tianshan District in Urumqi, Northwest China's Xinjiang Uygur autonomous region, July 20, 2020. Urumqi is carrying out free nucleic acid tests for all residents and people who are visiting the city, in a bid to screen for novel coronavirus infections and reduce the risk of the epidemic spread. Nearly 2,000 medical workers, distributed in residential communities, are conducting nucleic acid tests for residents in Urumqi. (PHOTO / XINHUA)

In a series of escalating confrontations with Beijing recently, Washington's broadsides against the Communist Party of China have become a daily occurrence. However, the more than 70 years of economic growth and social stability China has achieved under the leadership of the CPC are a testimony to the Party's success in ruling the world's most populous country.

When the novel coronavirus pandemic broke out, the CPC led the Chinese people to successfully contain the virus in a short time and restart economic activities. It has also actively worked with political parties of other countries to jointly uphold global public health security, providing medical supplies and expertise to affected countries to help them fight the virus.

Amid the global pandemic, politicians in the United States, including Secretary of State Mike Pompeo, Defense Secretary Mark Esper and Attorney General Bill Barr, have kept ramping up their rhetoric against the CPC to slander its credibility. However, findings from a US research institute on governance point to the Chinese people's satisfaction with the government's performance.

A policy brief, released by the Ash Center for Democratic Governance and Innovation at Harvard University's John F. Kennedy School of Government earlier this month, finds that "Chinese citizens rate the government as more capable and effective than ever before" and the Chinese people's overall satisfaction with the central government exceeds 93 percent.

The report contains data from eight separate surveys between 2003 and 2016, and it records face-to-face interview responses from more than 31,000 individuals in both urban and rural settings. It said "the Party appears to be as strong as ever" and that "a deeper resilience is founded on popular support".

Zheng Yongnian, a professor of politics and director of the East Asian Institute at the National University of Singapore, said that the US administration is clinging to an approach of "identity politics" to demonize China, and under its narratives, the CPC takes the place of China when US hard-liners and elite conservative politicians vilify the country.

The purpose is to sever the connections between the CPC and the Chinese people, and to portray the confrontation between China and the US as a conflict between different systems, Zheng told Chinese social media platform Zhenghedao.

While seeking to drive a wedge between the CPC and the Chinese people, he added, the US also uses the approach to isolate China by demonizing the CPC in a bid to form a united front of Western governments to confront China.

When describing its relations with the people, the CPC always uses "the flesh-and-blood bond" to highlight that it comes from the people, relies on the people and works for the people. Serving the people wholeheartedly is the fundamental purpose of the CPC, as laid down in the Party Constitution and upheld by generations of its leadership.

READ MORE: US attempts to pit CPC against Chinese people bound to fail

During the fight against the novel coronavirus outbreak, the CPC has upheld the belief of "people first "and mobilized all resources available to protect people's lives and health. Xi Jinping, general secretary of the CPC Central Committee, acted as commander-in-chief in the war against the contagion, urging officials to give top priority to people's health and lives.

In the third volume of his book Xi Jinping: The Governance of China, which was published at the end of June, Xi explained how strengthening the Party's leadership and upholding a people-centered philosophy have great relevance in realizing national rejuvenation.

"To ensure that the people enjoy a better life is the ultimate goal of all our work and is an important manifestation of our Party's fundamental purpose of serving the people wholeheartedly," Xi said in the book.

"To ensure that the people enjoy a better life is the ultimate goal of all our work and is an important manifestation of our Party's fundamental purpose of serving the people wholeheartedly," Xi said in his book "Xi Jinping: The Governance of China"

Yao Yang, dean of Peking University's National School of Development, said anyone trying to comprehend China from a Western perspective will find it difficult to understand what happened to the country.

Speaking during a recent online seminar on China's political system, Yao said that for many people in the Western world, if a country's system is not categorized as a "Western-style democracy", it will be "authoritarian".However, Yao said, it's incorrect to describe China's system as "authoritarian" as the CPC is actually different from political parties as defined by "Western-style democracy".

He explained that political parties in Western countries often represent a group of people, however, the CPC represents the whole Chinese people, and it boasts more than 90 million members from all walks of life throughout the country.

Since it was founded in 1921, the CPC has made clear its mission of modernizing China and leading the Chinese people to live a better life, Yao said.

While seeking domestic development, the CPC has also led the country to evolve from a follower and learner into a champion and contributor of multilateralism and globalization

The CPC will be marking its centenary next year. It said, by that time, China will secure victory in completing the building of a moderately prosperous society in all respects. It also aims to eliminate absolute poverty throughout the country by the end of this year.

While seeking domestic development, the CPC has also led the country to evolve from a follower and learner into a champion and contributor of multilateralism and globalization. It is always open and inclusive and willing to share ideas and solutions to address common concerns, especially in the times of COVID-19 and world economic recession.

Martin Jacques, a senior fellow of politics and international studies at Cambridge University, attributed China's success to the CPC's constant reforms and its principle of "serving the people".

"One of the features of the Communist Party of China has been its ability to constantly reform itself, keep moving on and not getting stuck, and constantly responding to the latest situation in the country," Jacques said in a video interview with China Central Television.

The scholar said that the CPC has made remarkable achievements in leading China to be an influential player on the international stage, adding that the CPC's modesty in learning and self-reform will help it to cope with the problems on the way forward.