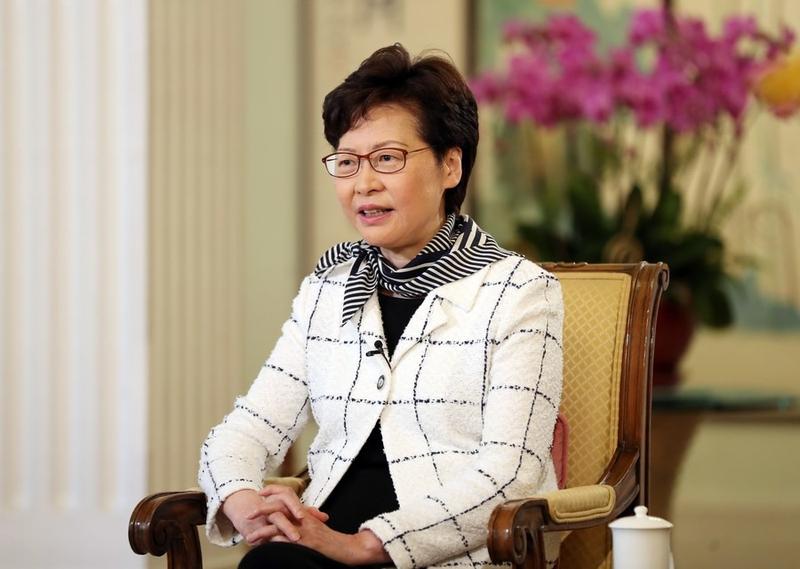 HONG KONG - Chief Executive of the Hong Kong Special Administrative Region (HKSAR) Carrie Lam said she is determined to lead the financial hub to rally its strengths and efforts for recovery after a turbulent year of violence and unrest.

The chief executive said the past year has proved that the Hong Kong society is in urgent need of deepening the understanding of "one country, two systems."

"The most challenging test has yet to come," Lam said in an exclusive interview with Xinhua two weeks after the enactment of the law on safeguarding national security in the HKSAR.

The chief executive said the past year has proved that the Hong Kong society is in urgent need of deepening the understanding of "one country, two systems."

"For the coming two years, the focus of my job is to restore order out of chaos and get the fundamentals right," Lam said.

The new law, adopted by China's top legislature and promulgated in the HKSAR on June 30, is crucial to safeguarding national security in Hong Kong and bringing back peace and order, Lam said, calling the legislation highly "timely and necessary."

Hong Kong has been gripped by prolonged social disturbances since June 2019, with many of the over 1,400 protests and assemblies descending into illegal and violent incidents.

"Many people said Hong Kong was no longer the place [they are familiar with]," Lam said, noting the impact on Hong Kong was enormous and lasting and she, as the HKSAR chief executive, was also facing the toughest challenge in her 40 years of public service.

For the coming two years, the focus of my job is to restore order out of chaos and get the fundamentals right

As the law has been put in place, it is the responsibility of the HKSAR government to strictly enforce the law and bring whoever breaks it to justice, Lam said.

The rule of law was trampled on amid the social unrest over the past year. Some educators even preached that one can break the law to achieve the so-called justice determined by oneself, and an increasing number of young people took to the streets, committed violent acts and were arrested and prosecuted.

The chaotic situation must be reversed, Lam said, vowing more efforts to raise people's awareness of protecting national security and abiding by the law and better explain to the public about the significance of national security.

Lam said the law is important to the national security of the country and its 1.4 billion people, and its enforcement is largely entrusted to the HKSAR. "In contrast, would the United States delegate the power of handling national security affairs to a state or a city? Impossible."

It is the responsibility of the HKSAR government to strictly enforce the law and bring whoever breaks it to justice, Lam said

"Being entrusted with such a huge responsibility by the central government, we must make sure the law is being well implemented," Lam said.

Since the social unrest started last year, western countries have increased their interference in Hong Kong affairs. The United States has blatantly imposed sanctions against Hong Kong, with its so-called "Hong Kong Autonomy Act" signed into law on Wednesday.

Lam condemned the US government and congress for violating the basic norms of international relations and said she does not worry about the sanctions.

Hong Kong's status as a global financial center is not granted by the United States and "financial sanctions will hurt not only Hong Kong but also US companies," Lam said.

The United States enjoys a surplus of nearly 30 billion US dollars each year in its goods trade with Hong Kong, and US financial institutions conduct a large proportion of transactions in Hong Kong's capital market.

While the United States is attempting to use sanctions to shake people's confidence in Hong Kong, the national security law will in return consolidate the confidence of investors and businesses, Lam said.

"Over time, both overseas investors and Hong Kong residents will find out that there is no need to worry at all," she said.

The prolonged social disturbances and rising cases of COVID-19 infections have dealt a double whammy to Hong Kong as its gross domestic product plunged 8.9 percent year on year in the first quarter of this year and the jobless rate during March to May spiked to a 15-year high of 5.9 percent.

However, Lam remains highly optimistic about Hong Kong's outlook and believes its advantages are intact.

"Our edges primarily lie in 'one country, two systems' and secondly in an independent judiciary system and an efficient business environment," Lam said. "The strategy of the HKSAR government is to protect our inherent advantages and wait for the best timing to revive the economy."

From the Guangdong-Hong Kong-Macao Greater Bay Area to the Belt and Road Initiative and the cooperation with the ASEAN members, "all these will bring a great deal of opportunities to service providers and businesses in Hong Kong as an international financial center," Lam said.

While tapping the opportunities of integrating into national development, Hong Kong also needs to resolve its own deep-seated problems

While tapping the opportunities of integrating into national development, Hong Kong also needs to resolve its own deep-seated problems.

Since taking office in 2017, Lam has been working on tackling Hong Kong's development bottleneck and bringing in new vitality. She highlighted housing, land supply, improvement of people's livelihood, and economic development in her latest Policy Address published last October.

However, the filibuster of opposition lawmakers has turned providing people's well-being into a political issue.

Lam said many government development proposals, including a land reclamation project, have suffered obstructions. "I hope the public can see clearly who is obstructing Hong Kong's development."

Looking ahead, Lam said there are a lot of things she wishes to achieve. "Build more houses, develop more land, improve communication and education, promote arts and culture...I hope to keep pushing forward on all these fronts."