By CUI JIA in Beijing and LIU KUN in Wuhan 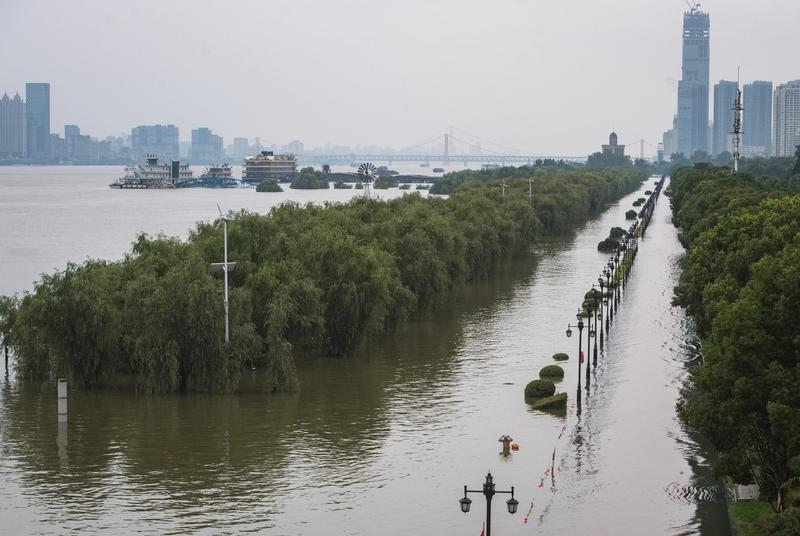 After its arduous battle against the novel coronavirus outbreak, Wuhan, the city hardest hit by the epidemic in China, is now uniting against another enemy－flooding.

The COVID-19 outbreak has made Wuhan people more united than ever, so we can quickly come together to fight the flood

Wang Han, a local resident who was rescued during the 1998 flood in the city

The peak level of the Yangtze River, which runs through Wuhan in Hubei province, passed through the city at 11 pm on Sunday at 28.8 meters. It was the river's fourth-highest recorded water level in Wuhan. However, the local government and the city's residents remain on guard as the section of the river in the city is likely to remain above the warning level for at least another 10 days.

After staying at home to minimize the spread of the novel coronavirus earlier this year, Wuhan residents have now come forward to patrol its flood embankments at all hours to protect the city, which has a population of more than 10 million. Wuhan now has about 30,000 people on patrol every day, according to local authorities.

Wang Han, a local resident who was rescued during the 1998 flood in the city, is one of them. In 1998, Wuhan was hit hard by the flooding of the Yangtze, which killed more than 3,000 people and left 14 million people displaced along the Yangtze River Basin. 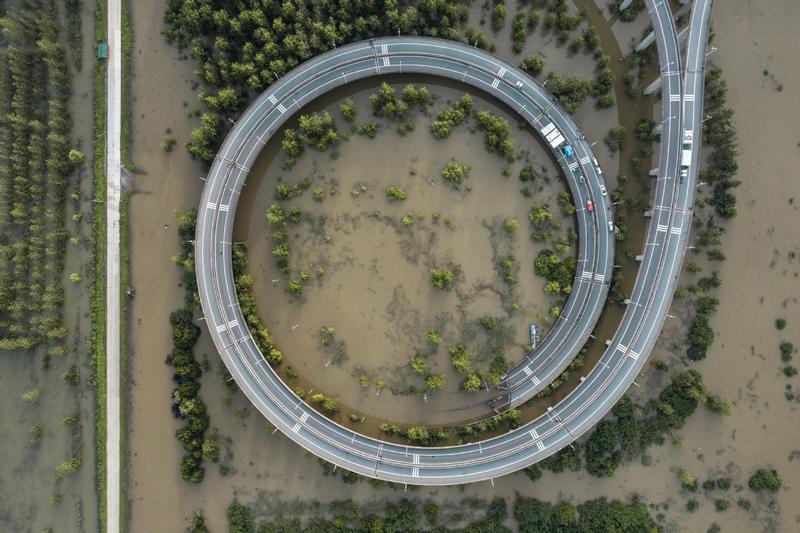 A section of road is engulfed by water from the Yangtze River on Tuesday in Wuhan, Hubei province. On Saturday, local authorities opened the flood defenses on Tianxingzhou, a 26-square-kilometer island in the river, to divert floodwater. (CHEN ZHUO / FOR CHINA DAILY)

Wang said she can still vividly remember when People's Liberation Army soldiers rescued her in an inflatable boat and took her home after her primary school in Wuhan was flooded in 1998. She was 8 at the time. Now the 30-year-old community worker has volunteered to join the patrol of the city's flood defenses.

"The COVID-19 outbreak has made Wuhan people more united than ever, so we can quickly come together to fight the flood," said Wang, from Xudong community in Wuchang district. She had helped elderly people in her community get their groceries during the outbreak when the city was put under lockdown from Jan 23 to April 8.

She started to patrol the 2.8-km flood embankment near Xudong on July 8. During the shift, from 6 am to 2 pm, she walked back and forth to check for any leaks in the embankment and to record the water level. "Last week, the water level was about 27 meters, and now it has surpassed 28 meters. Flood control shields were also put up along the embankment," Wang said.

Like fighting the epidemic, the battle against the flood can also be fatal. Early on Monday morning, Shu Mingzhi, director of the water affairs service center of Xinchong subdistrict, died when he was patching up the embankment at a lake in Wuhan. The 59-year-old fell ill on the site and later died of a brain hemorrhage at a hospital.

Shu had been working for more than 30 days without a break to fight the floods since the city entered the rainy season, according to the Wuhan government.

Although the flood peak has now passed Wuhan, Chen Guiya, deputy chief engineer of Changjiang Water Resources Commission, said the water level of the Yangtze River at the Wuhan section will remain above the warning level for about another 10 days.

"If no major floods occur upstream, the water level of the Yangtze River in Wuhan may drop below the warning level of 27.3 meters on July 23," he said at a news conference in Wuhan on Tuesday.

Cheng Jianjun, deputy director of the Wuhan Flood Control and Drought Relief Headquarters Office, said that the city will prepare for the worst and ensure sufficient measures are in place to handle any flooding that is even greater than in 1998, when the water level of the river reached 29.4 meters in Wuhan.

READ MORE: Wuhan shows how economies may recover after the virus

Chen said the 3,900-kilometer flood defenses along the mainstream of the middle and lower reaches of the Yangtze River were reinforced after the severe flooding in 1998, so they are more capable of keeping people safe this time.